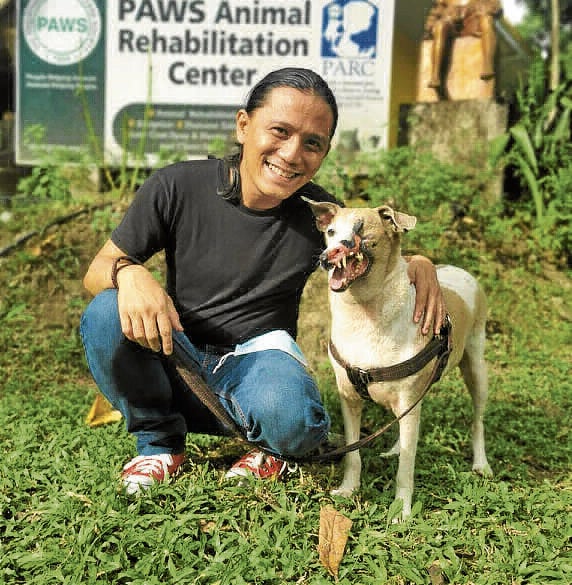 Dolly and her new fur dad, artist and graphic designer Tej Tan, who wanted her “the moment I saw her”

It took a really cruel human to disfigure Dolores’ face, but a veteran PAWS foster mom and an artist looking for a fur baby have given her a new life

And now, for some really, really good news, especially for dog people out there.

Last July 21, 2019, the Inquirer ran a story on how Dolores, a dog who had been badly disfigured after a despicable human threw what was apparently boiling oil on her face, had been rescued in Boracay.

Michel Van Der Kleij, founder of Aklan Animal Rescue and Rehabilitation Center, and other members of the animal welfare group who saved the dog then coordinated with Philippine Animal Welfare Society (PAWS). Dolores, as they called her, was brought to Manila and taken in by Vets in Practice (VIP) animal hospital, specifically by senior veterinarian Dr. Marga Carpio.

Carpio said then that the prognosis was good for the poor girl, estimated to be about 9 years old: “She is strong, and she hasn’t given up on life.”

VIP kept Dolores for four months, until it was time to have her fostered and prepared for adoption. Enter PAWS volunteer Mitzi Cruz, who took on the daunting job of caring for a dog with special needs. “She still needed constant care, which involved cleaning and medicating the wound every two hours, round the clock,” Cruz says.

Apparently, however, Cruz “specializes” in such cases, and each case is always in danger of being a “foster fail”—that is, this owner of a digital marketing agency often ends up adopting the dog herself. In fact, Cruz evolved from volunteering at PAWS part time to actually working part time to spend more time with the dogs, and to serve as one of the shelter managers at PAWS’ Animal Rehabilitation Center in Quezon City.

“Because my fosters are mostly senior or special needs animals, I take them in with every intention of keeping them permanently if they don’t get adopted,” she says. Cruz has 17 dogs and 22 cats, either owned or fostered, at home.

Cruz adjusted her sleeping hours to treat Dolores’ wounds for a month, until the dog’s condition had improved “and I could afford to decrease the number of treatments and get a full night’s sleep once again.”

Both animal and foster mom had to get comfortable with each other. “I admit I was afraid of her at first. She’s a very big dog that went through severe trauma, and I could sense her distrust when I first attempted to clean her face. However, it didn’t take long for her to realize that everyone in the family had nothing but love to give. She trusted all of us, but she was particularly attached to me.”

Considering how disfigured Dolores has become—the boiling oil practically melted half her face away—Cruz was “shocked” when Tej Tan applied to adopt her. “And to be honest, I thought he would be discouraged when he met Dolores in person, saw the wound up close, and realized what it really took to look after her. I introduced other dogs to him, but he still chose Dolores in the end. I liked Tej right away during our first interview, and I liked him even more when I met him and saw how he was with Dolores. I could tell he had the commitment and temperament to look after her.”

Tan, an artist and designer, found Dolores on the PAWS website. “I was looking at all the dogs up for adoption, and immediately fell in love with Dolores. Clichéd, I know, but I wanted her the moment I saw her.”

Tan renamed her Dolly, after Dolores “Dolly” Dent, a Batman comics villain, and although he wasn’t affected by her appearance at all, “I’d be lying if I said I wasn’t worried about taking care of her,” he says. “Our first week together, I was like a doting parent. I second-guessed everything I did. Was I helping her or hurting her? Did I do enough or too much? Sure, it can be annoying when people ask, ‘What happened to her?’ over and over. And, yes, people do cringe or get scared every now and then, but that doesn’t matter. As long as Dolly’s happy, I couldn’t care less what people think.”

Tan has long been an animal lover. “We’ve always had dogs in the family. Cats, too. My sinusitis didn’t stop me from playing and hanging out with my previous pets. But oddly enough, I haven’t had any allergic reactions to Dolly.”

Dolly is not a young dog, but after he brought her home Dec. 1, Tan is confident about where she will be for what remains of her life: “Just chilling beside me. Maybe when the pandemic is over, we can go to the beach regularly. I’ve been learning how to surf, on and off, for a few years now, which led me to painting surfboards. And since Dolly’s from Boracay, I think we’re just perfect for each other.”

Is there anything he wants to say to people who are cruel to animals—and to anyone else thinking of adopting?

“As much as I want justice served, I’m not sure those sh*t-eating, evil motherf*ckers will be punished for the horrible thing they did to Dolly. So I’ll just focus on taking care of her as best I can. And for anyone who wants to get a pet, I suggest adopting from your local shelter or pound. You’ll be rescuing one of these wonderful fur balls, and maybe they’ll rescue you back with their love.”