Light at the end of the tunnel | Inquirer Lifestyle ❮ ❯ 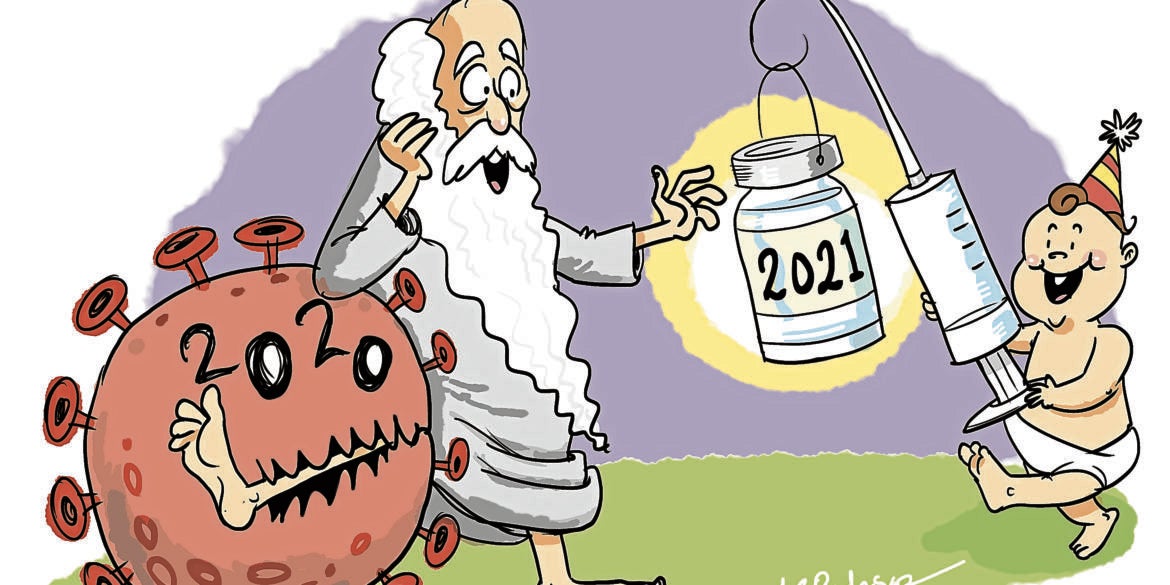 Light at the end of the tunnel

After all the trials and tribulations of 2020, we can’t help looking forward to a turnaround in our fortunes this year

My daughter Celine recently posted a cute video of her 3-year-old grandson Arthur on Viber diligently washing his hands while singing “Happy birthday to you,” in an imitation of CNN’s Dr. Sanjay Gupta demonstrating how often and how long to wash our hands as a defense against the coronavirus. It occurred to me that this simple ritual is actually a very basic example of man’s persistent hope and effort to survive.

Despite the disappointments of previous years, every new year brings new hopes, new expectations. The year 2021 is no different. After all the trials and tribulations of 2020, we can’t help looking forward to a turnaround in our fortunes this year. Perhaps together with the survival instinct, hope is a trait hard-wired in us.

But more than just hope, we have also been equipped by nature with an indomitable will not only to survive, but also to thrive, and to overcome every challenge that comes our way. As part of the evolutionary process, every challenge humanity has faced and will face is merely an opportunity to climb one rung higher on the ladder of human and planetary progress. To fail is not an option, because the consequences are unthinkable.

For us Filipinos, last year literally started with a bang when Taal Volcano erupted in January, displacing many from their homes, showering and covering many surrounding areas, including Metro Manila, in a blanket of gray ash for weeks.

This was immediately followed by the global breakout of the COVID-19 pandemic and the imposition of the longest continuous lockdown of any country starting mid-March. The stoppage of normal economic activity devastated our country’s economy, and millions of our countrymen were plunged into desperate survival mode.

To top it all, a series of major typhoons hit our country, the worst coming in November, causing widespread destruction and uncontrolled flooding in many areas, taking hundreds of lives. As expected, the big death toll of unabated floods prompted Congress to conduct an investigation. And as usual, the blame was put squarely on widespread illegal logging, and harsh punishment was vowed against perennial offenders.

But will the story change this year? The clock is ticking, and decisive action is needed to prevent the otherwise inevitable tragedies still to come.

Many of the extreme natural disasters that have lately befallen us and the world are, of course, due to one major phenomenon—climate change—largely caused by us humans. Fortunately, 2021 provides some light at the end of the tunnel.

For us Filipinos, the envisioned Department of Disaster Resilience, a new and separate government agency, should provide improved preparation and more effective response and relief for our countrymen in the inevitable future natural disasters. House Bill No. 5989 creating this body has recently been approved in Congress, and it must be passed into law and implemented without delay.

For the whole world, many vaccines are expected to become available this year, hopefully the beginning of the end for the pandemic. We will probably have vaccines widely available in our country sometime in the middle months of the year.

The important thing is for our officials to ensure the efficacy and safety of the vaccines they will select. They should not compromise the health of their countrymen for expediency or for any other dubious consideration. And let us hope that the present vaccines will be effective against whatever variants of the COVID-19 virus will emerge.

Globally, the good news is that the fight against climate change will get a boost with the election of Joe Biden as US president. Biden, who regards climate change as an “existential threat,” which calls for immediate and far-reaching action, has vowed to immediately rejoin the multination Paris Agreement on climate change, which his predecessor Donald Trump summarily abandoned during his presidency.

Climate change will definitely be “front and center” in 2021, with participating countries formally committing to specific targets to achieve carbon neutrality by the middle of this century. This can actually save mankind.

Although the Philippines is not a major source of carbon emissions (industrialized countries are the main culprits), we are still responsible for our unmitigated local disasters, especially the widespread denudation of our forests caused by uncontrolled illegal logging. This practice continues to cost many lives, and must be addressed urgently and decisively by our leaders.

I end this piece with a testament to the wisdom of Joyce Kilmer, who wrote the iconic poem, “Trees.” With apologies, here is my “wake-up” adaptation in remembrance of those who perished in the many floods caused by the recent typhoons:

“I know that I shall never see / The millions of trees cut down illegally. / By crooks who must answer for the blood / Of those who perished in many a flood. / Whenever typhoons rage, it’s quite certain / A deluge descends from denuded mountain. / And when dams are made to overflow, / It wreaks havoc on communities below. / When I look at nature all around me / I know that only God can make a tree. / But when men vanish forests with impunity / What poems can be made by fools like me?”