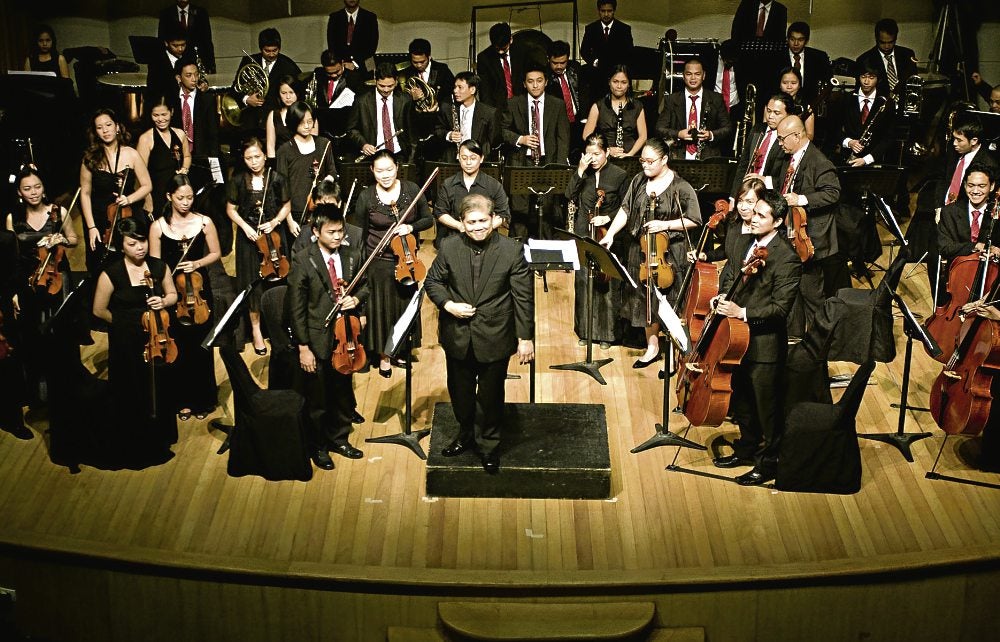 The performance was a repeat of its sojourn south of the metropolis at the Insular Life Auditorium in Alabang the night before.

Founded some 11 years ago, the MMCO has made its strong presence not only on the legitimate concert stage all over Metro Manila but also in every available venue in various communities, including on a makeshift stage in the rice terraces, schools, churches and the like.

The performance was a “moment of magic,” said executive director Chinggay Lagdameo, who hosted the concert.

At the outset, the MMCO impressed the audience with the buoyant sonority it produced in the opening number, Angel Peña’s “Philippine Festival Overture,” a truly inspired work scored in contemporary vein for the symphony orchestra.

One hardly recognized the folk song “Bahay Kubo” on which the overture was based. The crafty employment of multiple tonalities hid it only to be wittily revealed somewhere in the end, before its majestic ending.

Easily the orchestra played it with verve, with a very much fresh approach, indicative of  Toledo’s excellent understanding of it.

The orchestra retained its intensity in the succeeding works of Beethoven, projecting a debonair stance. Effectively, it sounded the Triumphant March and the Turkish March with aplomb, engaging the audience to the hilt.

Enescu’s Romanian Rhapsody all the more electrified the audience. The spontaneity with which the musicians fired their playing  went well with the ebullience of the work. The pacing was dramatically done with a well delineated pacing from slow to fast and stark gradation of dynamics.

A tour de force was Hovhaness’ “Requiem and Resurrection,” which stood unique on the program. It is a short work  scored for brasses and percussion.

There was no brassiness as the instruments intoned hymn-like sonority done in a singing, cantabile manner. The sensitivity with which the musicians brushed their playing truly awed the audience, no matter how briefly. The rendition was simply divine!

Highlighting the concert was Beethoven’s Triple Concerto, at times referred to as Concerto for Piano Trio.  Guests performers were violinist Michael Emery, cellist Ann Alton and pianist Cristine Coyiuto. The two artists based in New York, together with Cristine and flutist Caitlin Coyiuto, pooled their talents in a recent chamber-music performance in            Audi display room at Alabang.

The intimacy with which the trio forged in close rapport with the orchestra was simply astounding. All soloists in their own right, they played their parts in admirable oneness.

The hall, after its renovation, had somewhat become dry. Taking off the lid of the piano was a wise move to project its sound thus  asserting its lead.

The violin matched the piano with equal candor. The cello, undoubtedly expressive, somewhat did not sing; truly not a fault of the cellist but of the instrument itself, which somehow lacked brilliance.

Even then, the rendition was enjoyable: solid as it breezed through all the three movements. The repartee among the three instruments was articulate, and the ensemble was shared rather tightly.

The dance-like rhythm of the third movement pulsated with graceful zest much to the relish of the audience which applauded  thunderously  at the end.

Catching the chamber performance in Alabang through a DVD recording, one cannot but help single out Caitlin’s sterling world-premiere performance of Toledo’s new work “Psst,” composed on July 25, 2011, for flute and piano.

Of course Caitlin’s proud mother, Cristine, was on the piano. Mother and daughter essayed an engaging dialogue, bringing out the intrinsic appeal and brilliance of the work.

Caitlin impressively played the flute combining both usual “traditional” technique and an unusual, modern manner as called for by the work.

Seeking inspiration from indigenous music, the work called for a “residual tone,” which Caitlin explained as defocusing the embouchure to make the sound more airy, and “beat box,” a rapper’s technique that mimics percussive instruments.

It certainly is a welcome feat for Caitlin early in her career to have a catholicity of taste, making her at home both in all stylistic nuances from Baroque to New Music.