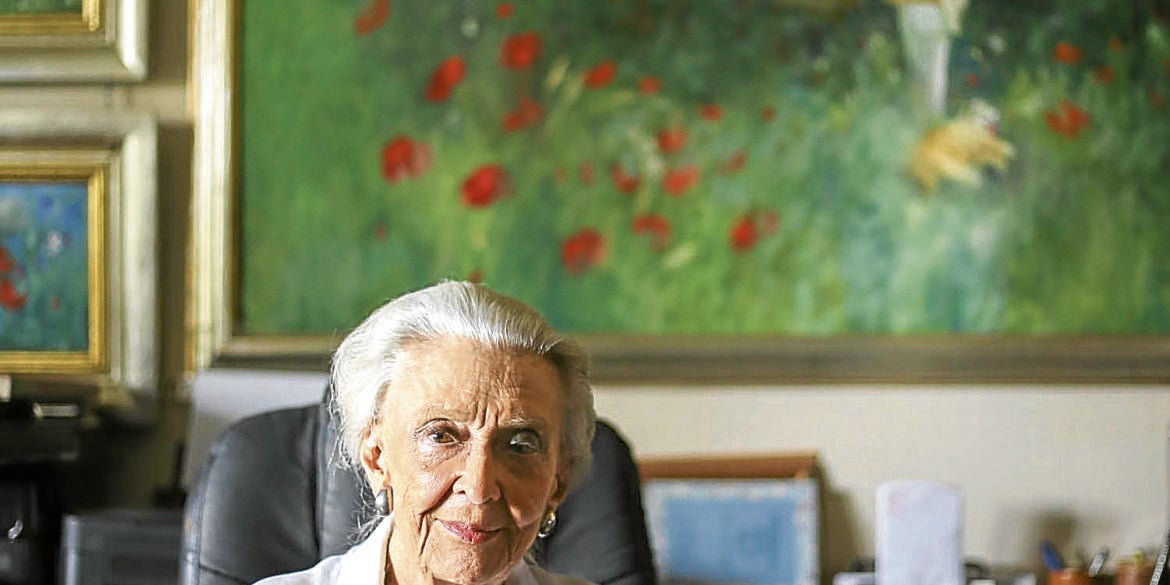 Artist Betsy Westendorp at her studio in Makati. Photo by Earvin Perias

Art as passage and passion: Betsy Westendorp at 93

You can endure many hardships in life if you have art, the Spanish Filipino painter Betsy Westendorp was once quoted as saying.

In 2016, word reached the artist in Manila that her daughter Isabel had died in Madrid.

Rather than immediately book a flight to Spain—what would be the point? she thought—Westendorp turned to her easel and painted one of her atmosferografias: a moody skyscape featuring blood-red and gray-white clouds against a darkening blue sky.

She called it “Passage,” a reference to her daughter’s transition into another state of being perhaps, but also a reminder that beauty endures in spite of, or even because of, human suffering.

In painting “Passage,” the artist had imbued a private tragedy with a universal meaning.

It was a process she was all too familiar with: Her young grandson had also died unexpectedly 10 years before, and in 1976 she lost her beloved husband Antonio Brias, an absence she rendered in the haunting group portrait “Incomplete Family.”

In each case, her art was a refuge from grief.

“Painting allows you to keep on going,” she often said.

Portrait painter of powerful and wealthy

It is no coincidence, then, that a major retrospective of Westendorp’s work, which opens at Metropolitan Museum of Manila (MET) on Jan. 29, is called “Passages”: in her 93 years on earth, the artist has gone through many—tragic and joyful.

For Filipinos of a certain age, Westendorp is best remembered for the idealized portraits of Ferdinand and Imelda Marcos and their children, made when they were at the height of their power. The memory is all the more vivid when one recalls that these portraits were what greeted participants in the Edsa revolt when they broke into Malacañang in 1986. (The late critic Alice Guillermo once tartly described them as “without doubt idealist in which vanity and flattery are at full play… self-contained images above human struggle and strife.”)

According to architect Emmanuel Miñana, one of the organizers of the retrospective:

“She began her artistic career on a rarefied platform as portrait painter of the powerful and wealthy, breathing into her canvases an abstractive deconstructivism, contrasting with the more classic hand of the portrait masters of the day. Her portraits have shown confidence and a strong presence seen in her vigorous strokes and an assured contemporary minimalism, like rendering the barong tagalog of an important sitting subject almost in squiggles and lines. This departure from classic portraiture of the day showcases Betsy’s unique and voluble voice as a portrait painter.”

In hindsight, it’s one period among many in a long career that spans more than 60 years, a lifetime’s work distilled in the more than 90 paintings gathered together for “Passages.”

Born in 1927, the artist took her decidedly non-Hispanic name from her grandaunt and godmother, a Dutch painter of some note named Betsy Westendorp Osieck.

Her early childhood was marked by the grim, fratricidal Spanish civil war, an ordeal from which drawing and painting provided a momentary escape.

According to the exhibition notes, Westendorp discovered she had a knack for portraiture, and would sketch her brother and sisters from life.

In any case, from a young age she knew that she was destined for the life of an artist.

When she came of age, she told her mother she wanted to study the fine arts, but her grandmother objected, reasoning that art school would expose the young Betsy to naked male models and all manner of bohemian sinfulness.

Instead, she found a private tutor, a well-known portrait painter, who gave Westendorp her first formal lessons in art.

Eventually, however, she found her natural, autodidactic style yielded better results than the academic method taught her. (Her numerous sitters over the years seemed to prefer it, too.)

The couple was soon dividing their time between Madrid and Manila, where she embarked on her first career as a portraitist. She continued to paint portraits when her family moved back to Madrid in 1965.

Westendorp’s entree into Madrid’s rich and famous was cemented by her friendship with ambassador Luis Gonzales and his wife Vicky Quirino, a Filipino power couple plugged into elite social circles in both countries. With her patrician features and effortless sense of style, Westendorp moved easily among the wealthy and famous, and soon found her services in much demand. A 1974 exhibit of her portraits in New York was attended by, among others, Jackie Kennedy and Aristotle Onassis.

It was perhaps inevitable that she would eventually be drawn by the Marcos’ gravitational pull. This part many Filipinos are already familiar with, since Westendorp became the toast of the Manila press’ society pages.

However, except for her portraits of her family which held deep emotional resonance for her, she didn’t allow herself to be defined or limited by her portraiture.

The artist believed that portrait painters are born, not made—you either have the affinity for human features, or not. She also held the somewhat magical belief that an artist only has a finite number of portraits in them. After so many portraits, they lose the facility, and the interest, in painting portraits.

A passion for still lifes

Luckily, Westendorp had also begun to nurture a passion for painting still lifes, particularly flowers. This would blossom into a full-blown immersion in nature with her atmosferografias, dramatic impressions of the infinitely shifting play of light on earth, sea and sky.

Initially born out of her long residence along Manila Bay, which gave her an incomparable sunset view (before runaway reclamation spoiled it forever), this obsession with the evanescent beauty of nature would eventually yield some of the artist’s best work.

“It is the unfettered quality of the works that lends the sense of intimacy between the artist and the viewer,” curator and auction specialist Richie Lerma wrote about an exhibit of Westendorp’s still lifes and landscapes.

“These paintings show a certain freshness and naturalness in her approach and the authenticity of her expression. This is Betsy at her most natural and sincere.”

“The most graphic way to convey the significance of Betsy Westendorp to Philippine art is to use as analogy the life and art of one Domenikos Theotokopoulous, better known as El Greco, The Greek, who is regarded as one of the greatest of Spanish artists.

“It was the custom then to name a painter after their place of origin. Both El Greco and Betsy Westendorp were not born in the country where they made their greatest contribution: Their art.

“In brief, just as the world thinks of Renaissance Spain through the painterly visions of El Greco, the same can be said of Betsy Westendorp—through whose eyes we now see the magnificence and the spectacle of the Philippine sunset and Philippine flora…

“It is true that often it takes the fresh perspectives of a foreign pair of eyes to show the Filipinos the visual treasures of nature that we all easily take for granted.”

As Miñana puts it: “Expanding her oeuvre while falling in love with her adoptive country, Betsy elevated the Philippine orchid, the Manila sunset, the barung-barong, houses on stilts, the atmospheric abstractionism of our skies, to magnificent, soulful protagonists of her larger than life canvasses. These elegant depictions hung in Malacañang, in a number of Filipino ambassadors’ homes while in their tours of duty, showcasing the grandeur and beauty of our country. As a patriot for her beloved adoptive home, Betsy has awakened the Filipinos’ eyes to the beauty and magnificence of our own country, celebrating commonplace subjects and making them sublime.”

Curated by Dannie Alvarez, “Passages: A Celebration of Betsy Westendorp’s Artistic Journeys” promises to afford the interested viewer with a comprehensive look at the various periods in the development of the artist’s work, through more than 90 paintings spanning six decades.

In keeping with current Inter-Agency Task Force for the Management of Emerging Infectious Diseases guidelines, the exhibit will be presented in both real and virtual space, starting Jan. 29 until March 15. The physical exhibit will be mounted at the MET ground floor Galleries.

In addition, the museum will present a 3D virtual tour, a biographical film documentary, and interviews and tributes.

A printed catalog for the exhibit, with text by Reyes, will be produced in partnership with De La Salle University Publishing House.

There will also be continuous education and public programs throughout the retrospective, including a “fireside chat” with the artist.