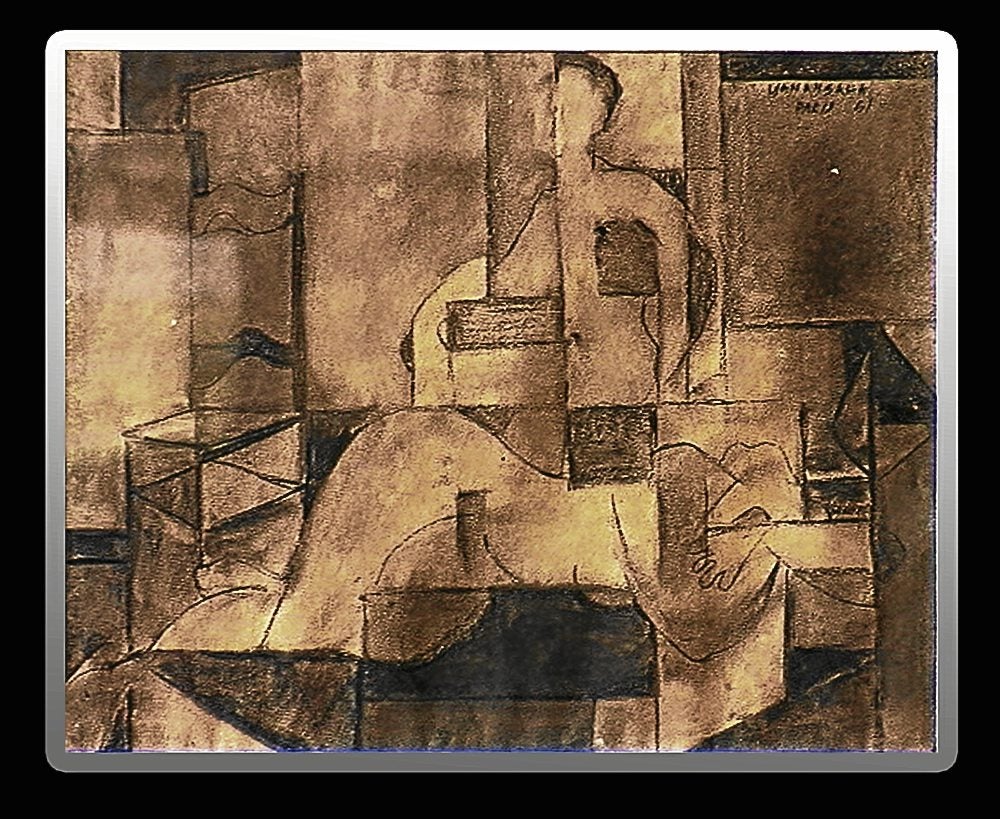 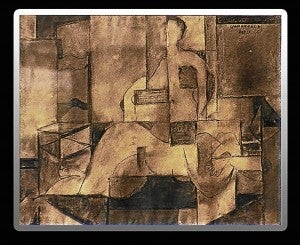 To an audience in thrall with painting—that is to say, canvases in glistening oils which are regarded as an artist’s masterworks—an exhibition of a collection of drawings will possibly not cause a ripple of excitement. That should come as no surprise.

A musical audience, for instance, would naturally expect ecstatic pleasure from listening to a symphony or concerto, but may not equally appreciate the nuances and charm of a simple etude, which is French, literally, for “study.” In visual terms, a sketch. The arts, however, in whatever medium, are not all bombast, brio and bravado.

The providential acquisition by Holy Angel University of a collection of drawings by the late Kapampangan National Artist Vicente Manansala (1910-1981), born in Macabebe, affords the audience an insight into the germination of his art. Every magnificent painting that ever issued from Manansala’s studio had its provenance or origin in a sketch.

The word is derived from the Greek word schedis, meaning, “done extemporare.” It is “a freehand drawing rapidly executed,” which the artist may use as guide for a current or future work.

“Oil and watercolor paintings by Manansala are in many private collections and museums. What rarely go out are his drawings. It isn’t because he has few of them. Manansala draws almost compulsively. He fills up notebook after notebook of drawings, detail studies in pencil or in ink. Particularly when he is preparing to do a mural, he makes many specific drawings—an elbow, kneecap, a hand, fingers, the curve of cheeks.

“For Manansala, drawing is a necessity. He believes that working with colors comes easily, but that drawing must be practiced constantly. Drawing disciplines the hand as the hand disciplines drawing. Drawing, Manansala believes, in the simple fact of art that can be taught and learned and that can be the subject matter of training.”

In various interviews, Manansala always emphasized the necessity of drawing, of learning anatomy, “not from a medical point of view, but from an anticipated of view.”

As a student at the School of Fine Arts of the University of the Philippines (located then at R. Hidalgo in the Quiapo district of Manila), he recalled the experience of copying a human skeleton, hastening to add that it was molded by his professor, Vicente Rivera y Mir.

Indeed, any conversation with Manansala was sure to summon memories, way back into his childhood. By his recollection, he was about six years old when he did his first drawings. In fact, he copied over and over a photograph of his mother and a lithograph of the Holy Family in Nazareth. Spending his childhood in Intramuros, where his father practiced his trade as a barber, the young Manansala was not queasy about capturing bugs and insects which served as live models for his drawings.

Except for a few finished drawings, most of the pieces in the collection consist of studies and sketches. The most tantalizing aspect of these drawings, indeed their precious significance, lies in the initial glimmering of a visual idea that would, through numerous variations, evolve into the fully realized paintings that are now among the glories of Manansala’s legacy.

Herein lies, for instance, the importance of the studies for the “Stations of the Cross,” which were eventually fully realized in the landmark large-scale paintings at the University of the Philippines in Diliman, Quezon City.

In this writer’s interview with Manansala, the artist recalls, with typical mirth and hilarity, the experience of working on the project:

Those who have marveled at the actual “Stations” will, upon seeing these sketches, take particular delight at the shock of recognition. The Crucifixion and the Pieta were, in fact, favored subjects, which Manansala regularly painted.

Other paintings are likely to leap into the viewer’s mind, such as the famous Whirr paintings, based on a flight of birds and rendered in what Manansala would label “transparent Cubism.” They were first sketched as loosely flowing lines delineating the avian shape and wings. The title is the onomatopoeic word suggesting the flapping sound of numerous bird-wings. “Give us this day,” which comes in several versions, is a depiction of the Filipino family saying grace. In the collection, sketches abound of a woman on her haunches, with her back turned to the viewer.

Rendered sumptuously in crosshatches is a sketch of a seated woman, sewing a fish net, depicted with typically splayed feet, which eventually found visual fruition in “Fisherman’s Wife.” Paintings of the sabungero (cockfight aficionado), such as “Man with a Rooster” and “Mamimintakasi” can be traced to a mere sketch consisting of thin strokes and flourishes. The trademark native sombrero, however, on the man’s head, is incontestable proof of the paintings’ origins, as is the rooster cradled in his arms.

A tender, haunting sketch has the inscribed words “as I remember Nena in Paris, 1966.” Bundled in thick winter coat, swaddled with a neck scarf, she is a solitary figure, viewed by the artist from all angles. Nena, of course, is the expatriate artist Saguil who spent a lifetime in that mecca of artists.

Too, there are sketches of table still lifes, and drawings of dancers, limned in highly stylized, almost abstract, visions as well as life studies, based on male and female studio models. Not surprisingly, the mother-and-child theme is a consistent subject.

As if literally “drawing” inspiration from Picasso who sketched a series of birds and animals (camel, owl, dove, squirrel, butterfly, penguin, bull, horse, pig, dog, cat) with the utmost minimum of line, Manansala did likewise, with his sketches of roosters and cats.

At an immediate glance, the viewer’s attention will be riveted to a sketch which deviates from his usual composition. Aside from a few human figures, the drawing suggests a three-dimensional space, indicative of a domestic area, denoted by window, door, and the chequer-patterned floor. The latter, of course, is the dead giveaway.

Voila! This is the study for the painting “After Pieter de Hooch’s Interior of a Dutch House,” which art critic Emmanuel Torres unreservedly praised:

“(It is) ample evidence of a Filipino painter’s ability to absorb universal values the significant forms, that lie beneath all great art and to be eclectic with purpose… It is a painting that represents best the Manansala breakthrough with the clarity of a diagram, as well as his increasing sophistication penetrated by youthful vigor, brimming with light and lightness that approximate a condition of sheer bliss.”

The so-called “Parisian Boudoir” drawings, done during Manansala’s sojourn to Paris in the ’50s, reveal his sensual side, in the untrammeled delectation of the naked female body. (Indeed, one large charcoal work, originally in the collection of journalist JV Cruz, depicts a bacchanalia of the flesh which, though not salacious, can, by turns, startle and embarrass the demure viewer.) Suffice it to say that in these boudoir drawings there is nothing tentative about Manansala’s exultation of the female nude.

While drawing is technically (and rather drily) described as “a visual art that makes use of any number of drawing instruments to mark a two-dimensional medium,” Paul Klee, an artist whose works Manansala intensely admired, regarded drawing, elegantly and poetically, as “going for a walk with a line.”

Since childhood till the end of his days, Manansala took pleasurable walks with his most “companionable” pen and ink, pencil, and charcoal, whether in the solitude of his studio or outdoors with fellow artists. Thus, from his adept and skillful hands did ceaselessly flow the numerous sketches and drawings from which Manansala derived such graphic learning and enjoyment.

The precious collection of Manansala drawings, now preserved for posterity at the Holy Angel University, is a testament to the immense value of draftsmanship, an essential step to the realization of the artist’s vision.

The Museum of Kapampangan Arts will be inaugurated on March 8, the 10th anniversary of the Center for Kapampangan Studies of Holy Angel University (HAU).

The inaugural exhibit will feature original works of National Artist Vicente Manansala owned by HAU, including eight large charcoal sketches, “Parisian Boudoirs,” done by Manansala during his stay in Paris in the 1950s as a scholar of the French government at the Ecole de Beaux Arts.

HAU also owns over a thousand sketches and studies made by Manansala on what would eventually become his major works, like the “Stations of the Cross” at the University of the Philippines Chapel.

Manansala was the first Kapampangan to be declared a National Artist for Visual Arts.  He was a native of Macabebe, Pampanga.

Another Pampango National Artist is Bencab, a native of Sasmuan, Pampanga.