‘UP is hallowed ground for activism and dissent, not rebellion’ | Inquirer Lifestyle ❮ ❯ 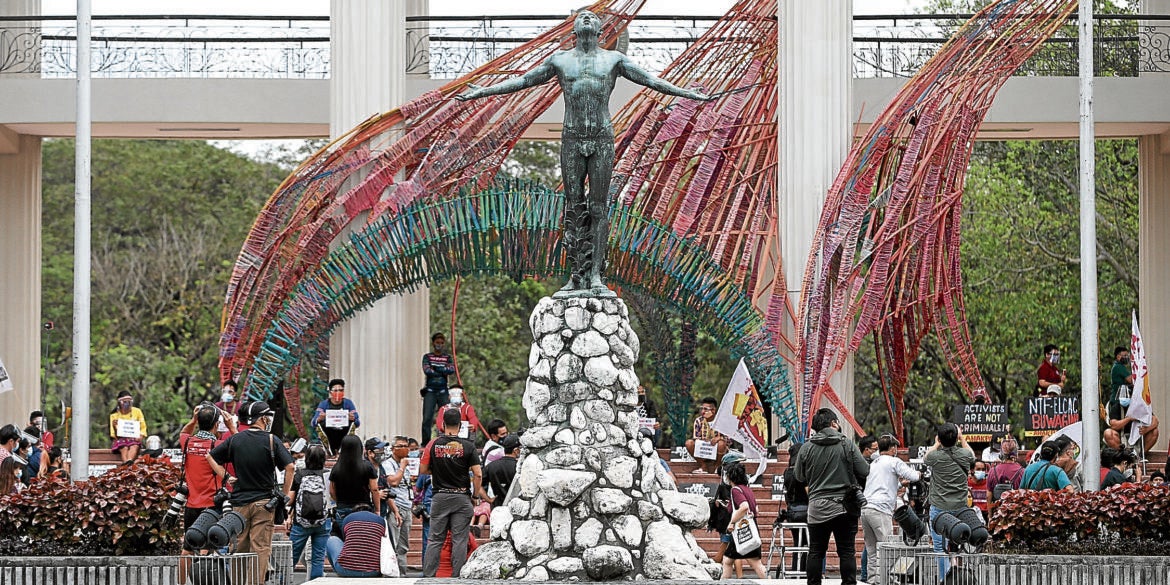 An indignation rally at the University of the Philippines Diliman on Jan. 19, denouncing the unilateral termination of the UP-Department of National Defense accord. —NIÑO JESUS ORBETA

‘UP is hallowed ground for activism and dissent, not rebellion’

Reactions to the abrogation of the UP-DND accord

In a Jan. 15 letter made public on Jan. 18, Defense Secretary Delfin Lorenzana terminated the 1989 University of the Philippines-Department of National Defense (UP-DND) accord, an agreement signed by then Defense Secretary Fidel Ramos and then UP president Jose Abueva. Included in that agreement was a provision that prevents state forces from entering the campuses of UP without prior notification given to the school administration.

Lorenzana has declared the agreement “obsolete,” calling UP a “hotbed” of communist recruiters and a “safe haven” for the enemies of the State—the Communist Party of the Philippines-New People’s Army (CPP-NPA) in particular.

The move has angered and alarmed the UP community and beyond, with students, student organizations, alumni, politicians, legal experts and activists denouncing the decision and the hashtags #DefendUP, #ProtectAcademicFreedom and #NoToMilitarization trending on Twitter.

“The state is more threatened by students than the deadly COVID-19,” one tweet read.“We are IN THE MIDDLE OF A PANDEMIC but the government’s priority is silencing activists,” another user posted.

Of course, there are jokes, including one about UP wanting to be renamed to “West Philippine Sea” to keep the military, the police and the Duterte administration away.

“I must express our grave concern over this abrogation, as it is totally unnecessary and unwarranted, and may result in worsening rather than improving relations between our institutions, and detract from our common desire for peace, justice and freedom in our society.

“We want to maintain UP as a safe haven for all beliefs and forms of democratic expression.

“Our University community does not and cannot fear the fair and speedy enforcement of the law, and we value and appreciate the contributions of our uniformed services to our safety and security. We do not condone sedition, armed insurrection or the use of violence for political ends.

“At the same time, especially given our experience of martial law, we must reject any form or semblance of militarization on our campuses, which will have a chilling effect deleterious to academic freedom. This abrogation endangers the goodwill necessary for both of us to achieve our mission as responsible members of the same national family.

“Our police and military authorities should have no fear of academic freedom. Indeed UP has bred rebels and nonconformists—as well as it has bred presidents, senators, congressmen, and business, civic, and even military leaders. All the world’s great universities have produced the same range of thinkers and doers. By and large, intellectual and political dissidents in UP have always been in the minority, but it is a critical minority that has historically been vital to the maintenance of a healthy democracy.

“Left in peace, UP will continue to be a major contributor to the country’s development and to its national leadership in all fields.”—Excerpts from UP Diliman president Danilo L. Concepcion’s letter to Secretary Lorenzana

“The UP-DND accord is a historic pact. This agreement is the byproduct of the important work of student activists, who, alongside the diverse but concerted resistance of various sectors, moved history forward and freed us from the Marcos dictatorship. The accord has helped maintain the University’s atmosphere of academic freedom, birthing decades of critical and urgent interrogation regarding the issues of our time.

“It is this very history that is being threatened today. Defense Secretary Delfin Lorenzana, in ending the agreement, achieves three things:

“1. He opens the gates for further harassment and suppression, in a time when the military and police have enjoyed unprecedented resources and impunity. This is bolstered by the new antiterror law, the most contested in recent memory;

“2. By attacking a University which has become a symbol of freedom and dissent, he continues the Duterte administration’s erosion of our hard-won democratic spaces. This sends a chilling message to other campuses and institutions that serve as hotbeds of independent and critical thinking, and;

“3. With a single poorly worded letter, the DND creates another uproar that divides national attention, diverting our focus and energies from key issues like COVID-19 vaccination, charter change, massive corruption and human rights violations, among others.

“UP has become our sanctuary in Metro Manila, a safe space away from our militarized communities. Now the Duterte admin wants UP to become militarized, too. LAYAS MILITAR!—Alcadev Lumad School

“We REFUSE to let human rights violators infiltrate our spaces. We STRONGLY oppose this desperate act of militarization, and attack on our academic freedom and freedom of expression.”—UP Babaylan

“The unilateral termination… sends mixed signals with its claim that UP campuses have become breeding grounds for rebel-students.

“As a bastion for the expression of ideas, ideals and advocacies, and as a sanctuary for the exercise of our cherished rights and freedoms, UP is hallowed ground for activism and dissent, not rebellion.

“In the three decades that the agreement has been in effect, nothing prevented the DND and the Armed Forces of the Philippines (AFP) from enforcing the laws of the land in any UP campus as long as it is properly coordinated with the UP administration. We have assisted police personnel and even agents of the National Bureau of Investigation (NBI) in discreetly enforcing court issued writs such as warrants of arrest on campus. The agreement is therefore not a hindrance to the enforcement of the country’s laws and judicial orders on campus. It has never hindered DND or AFP from conducting intelligence operations in UP campuses otherwise it would not have been aware of what it claims as ‘ongoing clandestine recruitment inside UP campuses nationwide for membership in the CPP/NPA.’

“… the unilateral rescission of the 1989 UP-DND accord (i)s an assault (to) the freedom of UP as an institution. It comes at the heels of earlier threats to discontinue funding for the University, which was intended to silence and intimidate us.

“We will not back down. We will continue with our duty to defend the freedom of our people guaranteed under the Constitution—the right to life and liberty, the freedom of speech, of expression and the right of the people to campaign against graft and corruption.

“As the recognized national university, UP continues to perform its mandate to provide opportunities for training and learning in leadership, responsible citizenship, and the development of democratic values. It inspires us to nurture student volunteerism that will actively engage our people and develop their aspirations for social progress and transformation. We will continue to cultivate critical and creative thinking among our students from within and outside the university.

“The 1989 agreement is supposed to embody the shared aspirations for peace and democracy between the DND and the UP administration and was signed in good faith. As such, it can never be a hindrance to the achievement of these aspirations. Unless, a party to it views the other with contempt.”—UPLB chancellor Jose V. Camacho Jr.

“Forged in the spirit of upholding academic freedom and preserving UP autonomy, the accord was intended to shield the university from State intervention, arbitrary arrest and violence…

“Claiming that the accord has served as a ‘hindrance in providing effective security, safety and welfare of the students, faculty and employees of UP’ is certainly an empty assertion and cannot be used as justification over this arbitrary action.”—Official statement of the UP Manila faculty and officials

“We firmly stand with the UP community in the fight to defend the university and uphold Academic Freedom. Activism isn’t terrorism. Dissent isn’t terrorism. Speaking up and calling out bad governance is a civic responsibility.”—Adamson University Student Government

“Educational institutions do not breed insurgency. Social inequality, lack of land reforms, the militarization of ancestral land, abuse of authority and political repression do. Address the root causes. Militaristic policies will not solve these.” —@paulandreiroset, youth leader from Ateneo de Manila University

“Critical thinking and dissent are not synonymous to extremism, neither does it equate to terrorism. Refusal to take these nuances into account in the current antiinsurgency drive is dangerous and counterproductive. “The unbridled entry of the police and other military forces in the university would instill fear and curtail freedom, therefore threatening to destroy the very essence of a university.”— UP Baguio chancellor Raymundo D. Rovillos

“Under the Duterte regime, UP and progressive organizations within the campus are constantly subjected to attacks, threats and harassment coming from several state actors and even Duterte himself, further galvanizing Duterte’s disdain for accountability and dissent.

“With DND terminating the landmark agreement, the move legitimizes further attacks and harassment against members of the UP community, as well as empowering state forces to stifle our basic Constitutional right to dissent. “The move can also be considered as a calculated political action to make use of UP as the state’s testing grounds of their grand plan to curtail freedom of expression and showcase the institution as their example to dissuade critics from dissenting and expressing their thoughts against the government.

“The UP-DND accord was established to keep the state forces in check to ensure the safety of critics and members of progressive organizations inside the campuses, wherein they can freely air out their sentiments and opinions to the ills that plague our society, cementing UP’s legacy as a safe space where healthy discourse is observed.

“The accord is a safeguard protecting UP constituents from the State’s baseless red-tagging and its dangerous effects, which includes illegal detention, harassment and kidnapping. With the accord’s fate in limbo, the country is in danger of losing its only safe space for citizens to speak up freely.

“With the accord in limbo and the antiterror law in place, the University is expecting more attacks and harassment by the state forces anytime soon. Claiming that they are terminating the accord under baseless and unsubstantiated grounds is a blatant insult to not only UP constituents, but also to every Filipino citizen experiencing injustices committed by the fascist Duterte administration.”—Unity Statement of the UP Visayas Student Formations

“The University of the Philippines Visayas, like the rest of the UP System, will remain a bastion of academic freedom. This is not something anyone can abrograte. We will stand firm against any and all attempts to deprive us of our democratic rights.”—UP Visayas chancellor Dr. Clement Camposano

A bill has been filed by Senators Joel Villanueva, Nancy Binay, Sonny Angara and Grace Poe, seeking to institutionalize the UP-DND accord. INQ