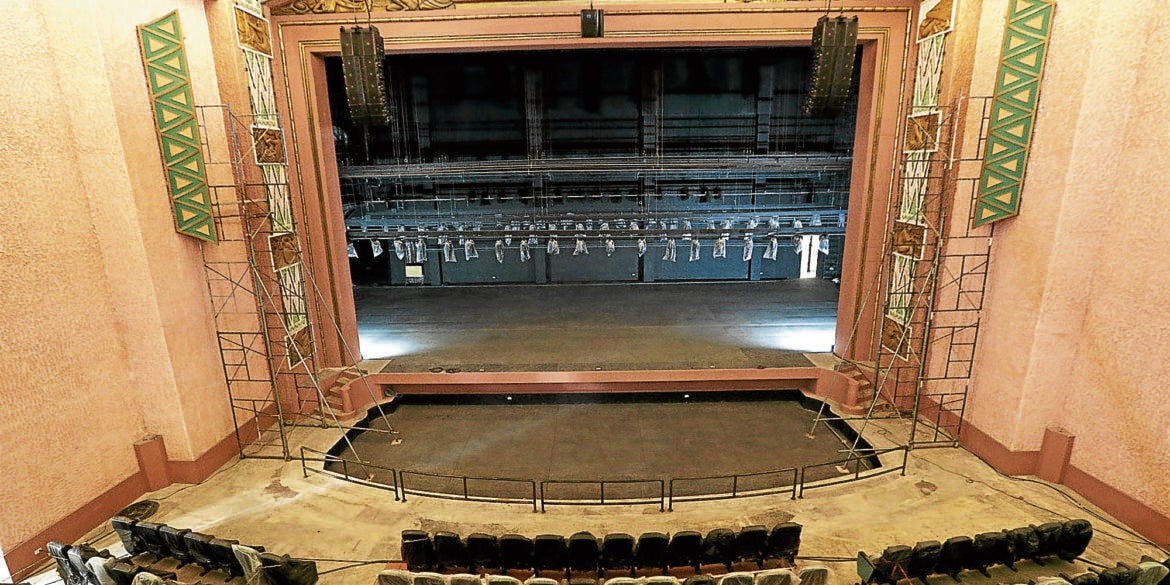 The Art Deco style of the original stage area is back in its full glory after restoration. INQUIRER PHOTO / RICHARD A. REYES

What to expect at Metropolitan Theater’s April 27 ‘soft opening’

Set to be completed in 2022, restoration work was delayed further after ancient graves were accidentally unearthed on Arroceros side

Initially targeted for reopening in 2020, the Manila Metropolitan Theater is finally opening its doors on April 27 as part of the Quincentennial Commemorations in the Philippines, particularly the 500th anniversary of the victory at Mactan.

The opening is going to be one of the day’s highlights with cultural performances to be held inside the restored theater.

Completed in 1931, this iconic building was designed by Juan Arellano in the Art Deco style. A number of sculptural pieces in and out of the building, notably that of Adam and Eve in the lobby, were by Italian expatriate sculptor Francesco Riccardo Monti.

It was damaged during World War II, restored in 1970s by Arellano’s nephew Otillo Arellano, and reopened in 1978 but fell into disuse in the late 1980s.

It is a declared National Cultural Treasure and has a seating capacity of 1,670 persons.

The Cultural Center of the Philippines Encyclopedia of Philippine Art notes that this particular Arellano-designed building deviates from the “stately and monochromatic” Legislative and Post Office buildings he also designed, describing the theater as “festive and colorful.”

Restoration works started in 2017 following its sale from the Government Service Insurance System (GSIS) to the National Commission for Culture and the Arts (NCCA) in 2015 for P200 million.

The repainting of the exterior walls was done as well as the restoration of the lobby and fruits adorning the ceiling.

However, the work was halted in 2019 due to internal issues.

The restoration team, then led by architect Gerard Lico, was dissolved and eventually replaced by personalities from or picked by the National Historical Commission of the Philippines with Chair Rene Escalante leading the restoration’s technical working group.

He was joined by Aaron Veloso as head of the project management team, Gigi Garciano of the Civil Engineering Department of De La Salle University as the structural engineer and Jose Velez Jr. as lead architect, among others.

In an interview, Escalante said his team introduced a number of changes from the original design of the previous architectural firm and it was decided that the building would be restored to its 1930s look, meaning a lot of structures added in the 1970s were demolished.

The demolished structures included the cinematheque and black box, resulting in the restoration of the two courtyards from the original design.

The old ice storage system used to cool the theater was converted into a cistern which will be used to water the courtyards.

The east side courtyard will be utilized as a garden by the NCCA while the west side will become a function area for events.

The third and final phase involving the restoration of the east (Arroceros side) and west (Taft Avenue side) wings will commence soon. “We need one more year to finish east and west wings,” Escalante wrote in an email. “Soft opening will only be limited to the theater and this will be on April 27.”

This means the building’s full restoration will conclude in 2022.

He said the balcony, multifunction room and kitchen added during the Marcos era in the west wing will be retained but will be converted into spaces for small gatherings such as performances, conferences and exhibits.

Meanwhile, the east wing will be used as offices of the NCCA. The spaces include an audio visual room which can seat up to 150 people, mini museums, galleries and rehearsal room.

Other spaces in this wing, which can be used as a coffee shop, restaurants or convenience stores, are going to be leased to prospective businessmen.

In the theater area, a cinema facility was installed using the latest technology for optimal sound experience, Dolby Atmos. The building also has new audio, lighting and air-conditioning systems as well as brand-new curtains and theater seats.

Escalante said they “reformatted” seat plans in the balcony to comply with safety provisions of the Building Code, resulting in the reduction of seating capacity by more than a hundred.

They discovered the original proscenium complete with batik patterns that was covered during the 1970s renovation. Escalante said they have since exposed this to reveal its original look.

With the completion of the restoration works, the building will function as a multipurpose theater. It will host the Araw ng Maynila celebration on June 24 and will eventually be a center for cultural activities such as film showings, film festivals like the Cinemalaya, graduation rites, zarzuelas and even comedias.

It will be a venue to showcase the country’s traditional arts, an alternative theater with lower fees and a venue of the NCCA’s flagship events, such as the art month and heritage month celebrations.

Escalante said that they are exploring the possibility of having the Amorsolo paintings (“The Dance” and “History of Music”) that used to hang at the lobby but are now in the collection of the GSIS be copied, with the copies installed where the originals once hung.

When asked about the parking problem, he said Jose Basa Street located behind the building will be utilized as the parking area whenever there is an event while the adjacent Park ‘n’ Ride building will eventually be used as a parking facility once its contract with the city of Manila expires.

Escalante revealed to Lifestyle that work was delayed in December 2020 after ancient graves with human remains and stone markers bearing Chinese characters were accidentally unearthed by his team in an area on the Arroceros Street side.

The discovery was reported to the National Museum which undertook a systematic excavation at the site, documenting and retrieving the artifacts and ecofacts.

Historian Lorelei de Viana told Lifestyle that the discovery makes sense since the general area where Manila Metropolitan Theater is located was the 17th to 18th-century Parian, a community of Chinese living outside the Intramuros walls.

She said the site where the remains were unearthed was the cemetery of the Parian, which was located beside the then Iglesia de los Santos Reyes.