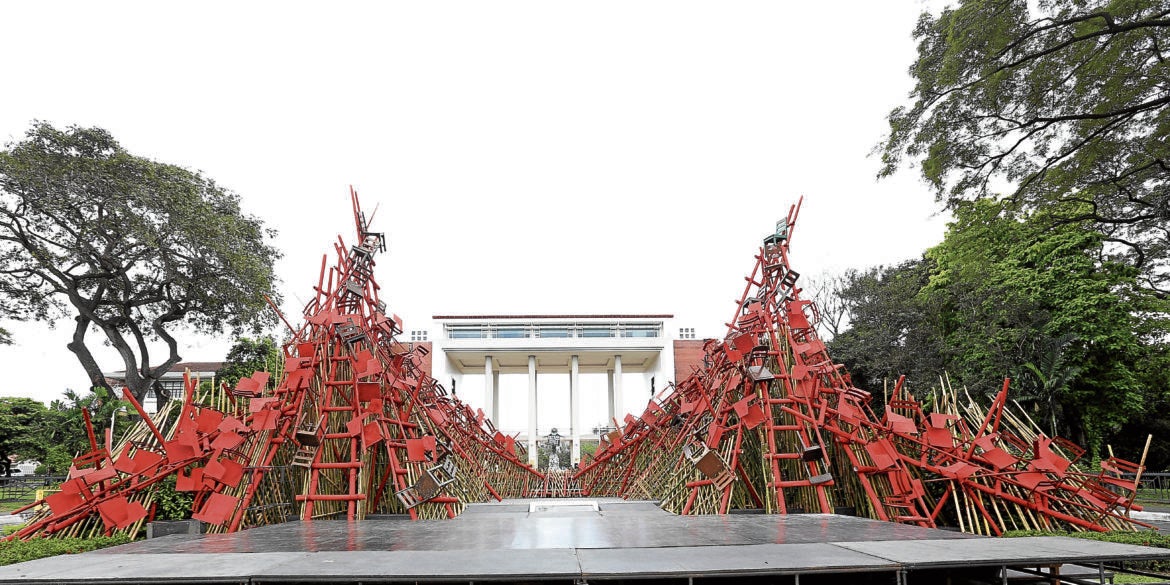 “Barikada” stands not far from where activists put up the original barricades during the Diliman Commune of 1971.--EUGENE ARANETA JR.

‘Artists once angered, pained and wounded, would bleed masterpieces more powerful than the monuments of tyrants’

If the purpose of art is to inspire thought and stir passion in its viewers, then Toym Imao’s large-scale installation work “Barikada” has succeeded, even before it was finished.

Days before its completion, “Barikada” served as the unintended backdrop for a confrontation between a ragtag group of pro-Duterte “youths” attempting to hold a rally in front of the University of the Philippines’ (UP) Oblation Plaza, where the installation was being mounted, and members of the UP community who blocked their path.

The bone of contention: the Department of National Defense’s (DND) ditching of a three decadeold agreement to keep police and military out of the state university, purportedly because of communist infiltration and recruitment of students.

Members of the UP community maintain that the alleged recruitment activities is, pardon the pun, a red herring: a made-up misdirect meant to distract from the government’s shortcomings in meeting the COVID crisis, the economic crisis and the China crisis.

It’s the usual “Red-tagging,” they add, which the state university has had to endure, on and off, since at least the late 1940s.

For its part, the government task force that seems to be orchestrating the anticommunist media campaign has doubled down, naming dozens of other leading colleges and universities as alleged recruitment hot spots.

The battle lines have been drawn, and “Barikada” makes for an arresting if serendipitous set piece for the ensuing photo ops.

“Barikada” was intended to commemorate the 50th anniversary of the Diliman Commune, nine days in early February 1971 when activists took over the university and declared it a “liberated zone,” until police and military drove them out of the campus in a violent siege.

Assembled from bamboo, repurposed old classroom furniture, previous installations and painted bright red, “Barikada” stands near the actual spot where the student radicals barricaded themselves in 1971.

Within the UP community, Imao’s piece is largely preaching to the choir, marking a page in the university’s long history of principled dissent and reaffirming the Diliman Commune’s place in campus folklore.

For their opponents, it might as well be a red cape waved in front of a bull, judging from angry comments and reactions on social media.

For Imao, that is just what art should be: a provocation.

“I have been very clear with my intentions with my public art installations,” he says in an email interview.

“They are not history lessons, or provide answers and enlightenment or even catharsis in relation to our nation’s history. They are mere portals, gateways to further inquiry and discourse. In today’s parlance, it can be associated with an avatar, or a clickbait icon. It makes you curious: What is this artist trying to say? Why this, why that? Then the conversation happens. I love hanging around my installations incognito and just eavesdropping on conversations of people viewing the work—from negative violent reactions to ‘I never thought of that’ realization moments.”

He should expect an earful after the installation is unveiled today as part of the UP Diliman Arts and Culture Festival 2021. Apart from “Barikada,” Imao will also be exhibiting “Desaparecidos,” his sculptural tribute to those lost during the martial law regime, at the UP Theater.

The son of National Artist Abdulmari Imao, the younger Imao, born in 1968, is an architecture graduate of the university and is currently a member of the faculty of its College of Fine Arts. Much of his work, largely in the form of public art and installation, has engaged with the troubled legacy of the martial law era.

Convergence of art and history

“When we did ‘Nagbabadyang Unos’ in 2020, it was a work that was supposed to represent the gathering ferment and dissent in 1970 that eventually led to the Diliman Commune of 1971 and the declaration of martial law in 1972. Little did we know that it was in a way ‘prophetic’ because on the next day, when we took down the installation, a sudden pandemic lockdown was declared. We didn’t even have the time to collect some of the components of the dismantled work since we were shut out from the campus. These leftover materials we were only able to retrieve months after and were used during the 2020 UP Diliman Pailaw program and for ‘Barikada’ this year.”

“Timing lang talaga,” he adds. “On the day we officially started working on ‘Barikada’ at the Oblation Plaza last Jan. 18, that evening the news broke about the abrogation of the UP-DND accord. The second day of our work on site, there was an indignation rally by the UP community just several meters from the installation.”

The convergence of art and history, he suggests, is fortuitous.

“’Barikada’ now not only represents a commemoration of the Diliman Commune but becomes an essential visual response to current developments concerning the university and state forces. Just overnight, it is transformed from an artwork that was meant to remind us of the past, into a protest art installation for the present, a pièce de resistance that accompanies the call to #DefendUP and academic freedom by the UP community of alumni, faculty, students and staff.”

For Imao, the political is personal and the personal is political, and it all feeds his art.

“My parents somehow got involved with the opposition in the 1970s. So I grew up with stories about the era and the excesses and abuses of the Marcos dictatorship. My father, a Tausug, lost his brother to soldiers who shot him, mistaking him for a Moro rebel. It was the first time I saw my father cry while holding the telegram on the fate that befell my uncle. His parents fell into despair and difficulties after the burning of Jolo in 1974, their lives became more and more difficult during the dictatorship, eventually succumbing to the hardships during that period.”

He adds, “My mother, on the other hand, is more of the firebrand Kapampangan activist in the family. She was an associate of Alejandro Roces and was involved with the original Lakas ng Bayan-Laban party that fielded candidates to the Batasan in 1978. I was about 10 years old at that time and was able to eavesdrop on conversations with the likes of Soc Rodrigo, Teofisto Guingona, Nene Pimentel and Neptali Gonzales. On two occasions, Maita Gomez took refuge in our old home together with her daughter Melissa and son Luis. I had a basic introduction to the realities of our painful histories through dinner table discussions.”

Nothing struck the young Imao harder, however, than the Marcos regime’s banning of his beloved anime TV series “Voltes V” and “Mazinger Z,” a deeply felt injustice that set him on his artistic path.

(He would later get his revenge in such acclaimed artworks as the “Super Robot–Suffer Reboot” series, in which he pitted robot figurines against Marcos, represented as Boazanian supervillain.)

Although he graduated with an architecture degree, Imao, like his father before him, won a Fulbright scholarship that allowed him to earn a masters in fine arts from the Rinehart School of Sculpture at Maryland Institute College of Art, and a residency at Baltimore’s Creative Alliance.

Upon his return to the Philippines, he concentrated on public and installation art.

“I believe what I do as an artist right now, imaging a point of history and putting that work out there in social media and various online platforms, leaves a much-needed digital footprint that can easily be accessed by future generations—50 years hence by a simple Google search,” he says.

“Barikada” is a historically significant work of art in another sense: It brings Philippine installation art where it all began, five decades earlier, the UP Diliman campus.

It is widely acknowledged by art historians that installation art was born in the wake of the First Quarter Storm when sculptor Junyee assembled his piece “Balag” inside the UP campus in the months preceding the Diliman Commune.

“Tito Junyee was indeed my inspiration for the work, and it is a homage to his ‘Balag’ installation which I consider as the first textbook art installation at the UP Diliman Campus,” says Imao.

Like Junyee, Imao was trained by National Artist for Sculpture Napoleon Abueva, and he considers both men his mentors.

“Junyee’s art has tremendously inspired that kind of art I have done in the past 10 years. I believe that commercial success and an army of devoted collectors with deep pockets should not define a great artist. Great artists are those who are restless in their pursuit in realizing their visions. They are unfazed by the trappings of commercial viability. They take great risks in putting art out there and are unmindful of acceptance by their audience but more mindful on the essential contents of their visual narratives.”He adds, “Junyee’s installation art form made me reevaluate my ‘monument making,’ his approach and dedication made me study possible options for alternative imaging of history—one that is not merely carved in stone or cast in bronze, but experiential and ephemeral. That I can explore other mediums of expressions in my storytelling—that I can use my art and ground them with my advocacies.”

Recent events surrounding his work have revived the age-old question that artists have had to answer, again and again: What is art for?

“In these trying times, where once again, democratic institutions are being challenged by authoritarian moves—and we’ve seen how a systematic attack on press freedom is being sustained by the powers that be,” Imao says, “I believe, when the truth is under siege and the press is pinned down by the state, the arts become our second line of defense. Artists once angered, pained and wounded, would bleed masterpieces more powerful than the monuments of tyrants.”

The unveiling of “Barikada” at 5:30 p.m. today at Oblation Plaza, UP Diliman campus, kicks off “EngKWENTrO,” the theme for this year’s UP Diliman Arts and Culture Festival, which runs until April. The opening will be streamed live on UP Diliman’s official Facebook page.