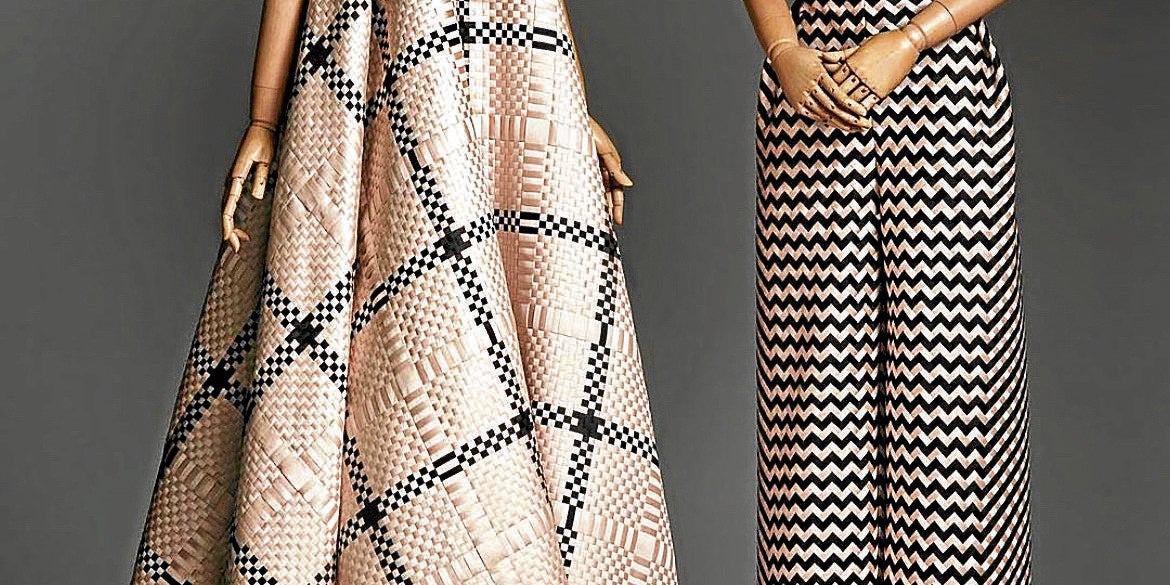 The Red Charity Gala, where he’s set to take the stage, may be on hold, but the fashion designer is primed for his moment in the sun

The year 2020 started well enough for fashion designer Ivarluski Aseron. In January last year, he presented his well-received banig terno collection at Ternocon, an inspired take on the national dress, featuring fabric strips interlaced basket-weave-style, that he labored on painstakingly for most of 2019.

As is typical, he poured everything he had in the Ternocon. “I saw my photos at the show and I didn’t realize I had gotten so thin!” he says.

But there was no time to rest. He had two more major shows lined up for 2020, one of which would have been the crowning moment of his career thus far: the Red Charity Gala (RCG).

Some might say, Aseron’s break on the RCG stage—arguably the biggest event in Manila’s social calendar that has featured the most prominent names in contemporary Philippine fashion—was long overdue. He is, after all, one of the designers of his generation with a definitive and distinct point of view, and fashion watchers have been predicting his turn at the annual gala, after his friend and contemporary Joey Samson’s in 2018.

Aseron admits he was indeed quite thrilled to learn he was chosen to be RCG’s featured designer for 2020. It was at a dinner where, either Kaye Tiñga or Tessa Valdes—the RCG’s cochairs—he couldn’t recall now, whispered in his ear that he was next in line.

“Napa-oh my God ako! I remember writing that moment down [in my journal]. But I kept my cool because it wasn’t yet official,” he tells us in a phone interview. It would be months later before the RCG voted and confirmed him as their choice.

Last year was Aseron’s 20th year in the business, and a gala show would’ve been the perfect way to cap the milestone. Because of the health crisis, he has come to accept that a gala show, or any show for that matter, would have to wait until this pandemic is over.

“Tessa said it’s impossible to push through this year,” he says.

“We haven’t formally decided yet, but it looks malabo (unlikely),” Tiñga confirms to Lifestyle. “We are hoping to do an alternative event if we can think of something that’s unique.”

“I barely started doing sketches when the lockdown happened. I could no longer travel to source fabrics,” says Aseron. With no end to the pandemic in sight, Tiñga and Valdes eventually decided to cancel RCG.

Like many, Aseron went through a dark phase. It wasn’t just the RCG that got canceled, but all events, the lifeblood of his studio. His last bridal fitting was two days before the lockdown, and that wedding had to be moved to almost a year later, this month.

“I got very sad and scared in the beginning . . . One time, I felt kind of feverish and thought I had caught COVID! There was so much uncertainty,” he says.

Occasional meet-ups with a friend at the grocery store became his only sort-of social activity. Food became his stress relief. “Every pound I lost while doing Ternocon I gained back, and more!” he says with a laugh.

By June, as the lockdown eased, he started to receive job orders again. Tourism Secretary Bernadette Romulo-Puyat and a couple of other clients had ternos or Filipiniana made for the 2020 State of the Nation Address. Then, came orders for dresses for wedding guests and ninang.

While other designers banded together to create retail platforms to make up for the lost revenue from canceled events, Aseron went with The New Mood, a fashion retail company set up by friends (@thenewmood.online on Instagram). He, with Lulu Tan-Gan, Dennis Lustico and Jaggy Glarino, were asked to design collections for its online debut.

“That worked for me because it was outright sale, not consignment. You would get stuck with inventory with the latter,” Aseron says. He’s preparing another collection for them, which works even better because he wouldn’t be doing the production—he’s only providing his designs.

“Besides,” he adds, “I don’t know if I want to handle my own e-commerce site, even on Instagram. I’m hypercritical of myself. I tend to overthink even photos that I post… But I know I really should post, because whenever I do, it translates to a sale or inquiry.”

Aseron has joined bazaars like ArteFino and Katutubo in the past and has seen how well other designers do with pop-ups, that he’s inspired to follow suit and do retail. He has also worked on local weaves, the fabric du jour in artisanal bazaars, and his retail collections have been well-received. He says, however, that his heart is in the made-to-order business model.

“I still love making clothes specific to a client. I don’t think I have reached the point where I’m burned out because of nasty clients and other challenges. I still love doing it.”

A measure of normalcy has returned in his workshop, as bridal orders have resumed, though his workers still come in in shifts. “It’s nothing like pre-COVID yet, but we’re grateful for the work,” he says.

Finally, he’s also starting to work on his sketches for RCG and give it all the attention it’s due. Ternocon had 10 looks; RCG will be at least 40.

“Last year, I just wanted to concentrate on the Ternocon and not get distracted. I had to focus. That’s how I work.”