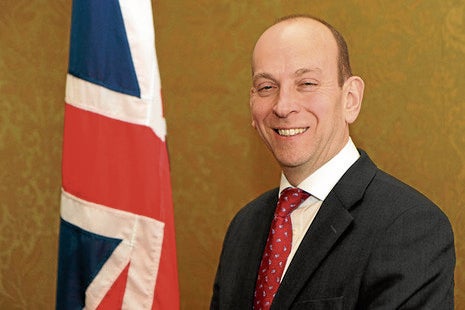 The envoys from the United Kingdom, Turkey and Hungry have embraced their country assignments warmly

A fluent Tagalog-speaking ambassador, strong advocate of media freedom, and staunch carer of cats: these are just some of the interesting qualities of United Kingdom Ambassador Daniel Pruce.

“We’ve improved on areas of trade and investment, security, tackling global issues like climate change, COVID-19, media freedom and human rights, and a lot more,” Pruce said of his work in the Philippines.

Pruce sees great potential for the UK and Philippines to become even stronger and closer. “[2021] marks 75 years of diplomatic relations between our countries. I am confident the links between us will continue to grow and we will increasingly work together on the big issues facing the world, including a clean and sustainable recovery from the impacts of the coronavirus.”

Pruce, who’s here with his wife Rachael, added, “We love our time here in the Philippines and are deeply touched by the warmth and generosity of the Filipino people.”

Turkey Ambassador Artemiz Sümer is no stranger to the Philippines. In 2002, her husband served the same post until 2006. “I feel most honored… It was a very big surprise to learn of my assignment to Manila,” she said.

Of her work as ambassador, she expressed optimism in enhancing bilateral cooperation in the areas of trade and investment, education, agriculture and defense.

This year, the Philippines and Turkey will celebrate 72 years of diplomatic relations. “My husband and I are both attached to your beautiful country and we particularly appreciate its warm, welcoming people. This joy is also passed on to our son, who has made the choice to come back to Manila after being here as a 9-year-old, to finish his academic studies in Enderun Colleges.”

Sümer embraces her comeback to the Philippines. “We are happy to be among our dear Filipino friends again.”

“From the early university days at the Pazmany Peter Catholic University as a law student, I knew that my life would be closely tied to international affairs,” she said. Tóth may be one of the youngest heads of missions here, but she is already bringing with her a wealth of experience gained in this region. While serving in Malaysia for half a decade, she took part in special projects including visits in Indonesia, South Korea and Vietnam.

Hungary and the Philippines are very close partners in the region, as highlighted not only by the visit of its Minister of Foreign Affairs and Trade—the first diplomatic leader to visit Manila since the pandemic began—but also by the recent conclusion of the 2nd Joint Committee on Economic Cooperation meeting here as well. The two countries have a lot to benefit from a close partnership in the fields of innovation and technology, water management, higher education and agriculture.

“Aiming to build our people-to-people contacts as well, Hungary provides 35 full-time, full-degree scholarships to Filipino students each year and would like to expand this number further. Education is one of the key areas of cooperation and it creates special bounds between our countries,” she said. —CONTRIBUTED