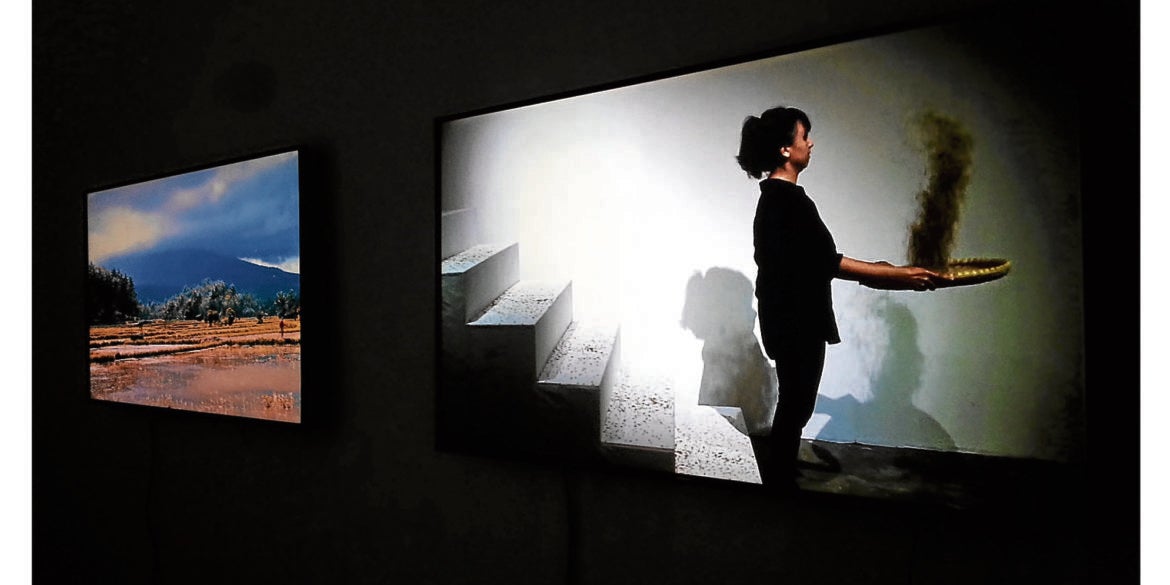 A screengrab from the video work “Tropical Loop”; that is the artist in the frame.

From installations to comic strips: artist Lyra Garcellano provokes us to think about how much—literally and figuratively—art is worth

Art, as a form of communication, aims to make one feel, think or do. Lyra Garcellano wants you to think.

The intent is clear in her installations (“Dear Artist, How much are you worth?”; “Southeast Asian Artist: To Be or Not To Be”) and many paintings juxtaposed with actual text. “I rely on the written word as my springboard; those who pseudo-psychologize me say it’s because I have parents who write. Who knows?”

Her art provokes thinking about identity, memory and history, almost straightaway from the titles: “Double Consciousness” (2014), “Twofold” (2015), “Gordian Knot” (2017), “Tropical Loop” (2018) and “Guests” (the recently concluded show at Finale Art File). There is no single look across Garcellano’s oeuvre, only constant themes.

At the core is a questioning of the art economy. In a 2019 essay titled “Prestige Machines and Performance Anxieties in the Age of the Economy of Recognition” (which appears in Issue 19 of the online contemporary art journal Ctrl+ P), Garcellano talks about the power relations in art: “To be visible in the ‘scene’ signals the prospects of harnessing more ‘power.’ To be constantly ‘seen’ or acknowledged by the ‘right people’ at the opportune time has become the stimulus to [collect and] maintain the steady stream of art currencies needed to run the proverbial marathon.”

And when the artist gets tired of running, she writes comics.

“Comics are another way to talk about what I want to talk about: the pressures and problems in the meaning-making of art. My comics are tiny monologues. They’ve been in publications like Perro Berde (the Spanish Embassy magazine), and as a zine that was included in the Palestine Biennial in 2018. This current series is unlike my previous comics ‘Atomo & Weboy,’ which was circulated broadly because that one was part of this daily in what seems like a lifetime ago.”

The comic strip now is called “Miki Blue,” after the noodles and Garcellano’s love for the color. “My strips are on social media platforms (@mikibluetoons on Instagram) but I smile as I answer this because most are on my accounts which have private settings. I like analog living, such that I prefer to only putter around the digital world in a very contained way.”

There’s a strip of the artist hearing from the “online art world genie,” asking her to choose what she’d like to be (Biennale superstar? Art Fair hotshot?). She takes so long, though, that the offer expires and the genie says: “Go to your corner and wallow in your unfulfilled potential.” This is snarky, esoteric humor, but that’s what Garcellano finds fun. “Interestingly, readers say that the strip allows them to recall their own parallel experiences in the art world. And for those not in the field, to be intrigued enough to want to know more about it.”

When she finished her Masters in Art Studies (Art Theory and Criticism) at the University of the Philippines Diliman in 2019, Garcellano used her own comic strips to present issues in her research study. “It was about mapping the prevailing art currencies within an exhibition economy and how a practitioner navigates or negotiates these gatekeeping mechanisms. My premise is that our lives since birth are dependent on what kind of access we have in terms of sources or resources; our productivity (and rewards for such productivity) is influenced by the extent of our privilege and the reach of our entry passes. It never is always about meritocracy.

“And yeah, I talk about these heavies in my comics because they’re really funnier that way… I take it as a compliment when art practitioners-slash-professors use my comics to jump-start a discussion of art concerns in their classes.”

“How much are you worth?” echoes beyond the art world: The question of valuation rings out everywhere inequalities exist, and is amplified in these pandemic times. But as the playwright Anton Chekhov claimed, the role of the artist is to ask questions, not answer them. “I presented the problem which everyone experiences in other fields. There is no formulaic answer,” Garcellano says. “To know the root problem is hard enough; to think stuff can be solved instantly is also farcical.”

These systems are, as her show was titled, a Gordian knot—an impossible tangle where pulling on either end only tightens it further. Garcellano shows us the huge tangles we all live in, and invites us to think. The laughs from the comics are a reward for those who do. —CONTRIBUTED