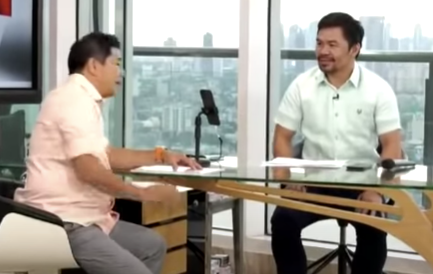 Sen. Manny Pacquiao reminisced and talked about how his life was back then when he was younger, and still wasn’t the boxing champ and politician that he is today.

Pacquiao recalled his difficult past in the recent episode of Willie Revillame’s GMA Network show, “Wowowin,” as seen on the program’s YouTube channel on Feb. 12.

(The truth is, we came from having absolutely nothing. We didn’t have our own home. I’ve experienced sleeping on the pavement of the street. [See] those who sleep on sidewalks with just cartons on their back? I’ve experienced that.)

Food was also scarce, and to survive, Pacquiao and his family just drank water. So he decided that he wants to help his family and he became the breadwinner.

When asked how he got into boxing, the People’s Champ said he was driven to it by the prize money.

(I didn’t know anything about boxing, it just so happened that there was a boxing event in Gen. Santos. I participated because I learned about the prize. The prize then was just P50 for each fight.)

He also talked about a part of his life which involved a younger sibling.

(Can you imagine, my brother Cong. Ruel, he was just little then, just a kid. He can’t understand if you tell him, if you explain to him that we don’t have food. He would cry out of hunger because it was already 1:30 p.m., [and there’s] no breakfast, no lunch.)

He recalled that his mom told them to just drink water but Pacquiao thought of getting food for his brother. He went to a nearby bakery to beg for some expired bread, to remove the stale parts and heat what remains, which he would feed to his brother.

Pacquiao as a politician is known for his highly conservative stand on certain issues mainly due to his Christian background, for which he has been criticized. His life has been dramatized in a film (“Pacquiao: The Movie”) starring Jericho Rosales, released in 2006. JB

Ice Seguerra remembers late father, the influence behind his love for singing