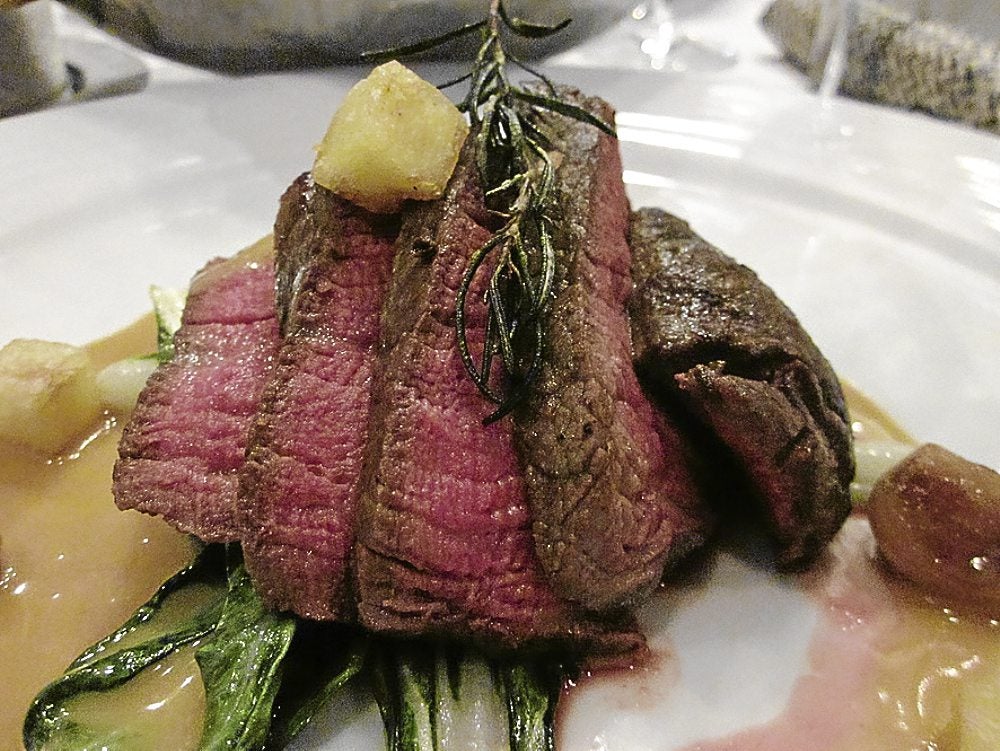 Fillet of beef with candied garlic and soy butter sauce

As the new executive chef of Hotel InterContinental Manila, Scottish-born Alisdair Bletcher is dreaming up innovative plans for the hotel’s food outlets. No stranger to the Philippines, Bletcher spent part of his childhood in the late ’60s in Manila, when he remembers eating turon at home and churros at Dulcinea.

After studying overseas, he returned to the Philippines in the late ’90s to work as executive chef in the old Hyatt,  reacquainting himself with Filipino cuisine.

It’s no wonder then that part of his plan for Café Jeepney is to serve more authentic Filipino dishes.

“Everybody thinks Filipino food is just tapa and adobo,” he says. He intends to correct this misimpression by putting more Filipino classics in Café Jeepney’s menu. Far from Westernizing them, however, he plans to stick to the traditional way of cooking, while using only the best ingredients.

Still, he’s not beyond combining Eastern and Western flavors. At Prince Albert Rotisserie, the tuna carpaccio we had for lunch had tints of wasabi and crème fraîche made with pickled ginger. Wisps of spring onions in a tempura batter added crunch and contrast.

Similarly, the fillet of tenderloin beef was layered on pechay leaves and a stream of sauce that combined the Oriental flavor of soy sauce with the richness of butter. The dessert was also East meets West:  crème brûlée with a topping of sweet ripe mangoes and banana spring rolls (in other words, turon) enriched with vanilla sauce.

Those dishes are now part of the set menus for lunch at Prince Albert. With three cycles and four choices for appetizers, main courses and desserts, the set menus, says Bletcher, are ideal for diners who want a quick but delicious lunch.

For its loyal clientele, the restaurant will  retain the a la carte dishes it has become known for, such as the Caesar salad prepared tableside and the roast prime rib of beef.

Here’s chef Alisdair Bletcher’s recipe for the fillet of beef. Because it has various components (the candied garlic, the soy butter sauce and sidings of potatoes and pechay), its preparation can be tedious. It took me about an hour to cook it, and that doesn’t include the time needed to marinate the beef.

Still, the result is well worth the effort. The piquancy of the sauce, the sweetness of the garlic, the crispness of the potatoes and the wholesomeness of the pechay leaves add up to a rich complexity of flavors and textures, making this a dish that’s truly scrumptious.

For the candied garlic:

For the soy butter sauce:

Combine garlic and olive oil and pour over the beef. Cover and let rest a few hours in the refrigerator.

Combine garlic cloves and olive oil in a shallow pan and cook over low heat until garlic cloves become golden brown, turning the cloves often so they don’t burn. Turn off the heat and pour oil into a bowl (reserve oil for use in another recipe). Retain garlic cloves in the same pan and pour in the extra virgin olive oil. Cook garlic gently on low heat until tender but still holding their shape, around 15-20 minutes. Remove garlic from pan and set aside. (Keep the resulting olive oil for use in other recipes—to cook with or for making salad dressings.)

Combine soy sauce, red wine vinegar, sherry vinegar and garlic in a saucepan and heat over low heat just until it begins to simmer. Gradually whisk in butter and cook until liquid is light brown. Add the chopped parsley. Taste a bit of the sauce and, if needed, season to taste with salt and pepper. Set aside.

Cut each pechay leaf in half. Season with salt and pepper. Heat oil and stir-fry leaves in hot oil quickly, just until they start to wilt. Remove pechay leaves from the pan with a slotted spoon (drain it well of the oil). Set aside.

Heat a griller or grill pan to medium heat. Remove the beef from the marinade and season with salt and pepper. Cook to the desired doneness (rare, medium rare or medium well).  Let rest a few minutes before slicing.