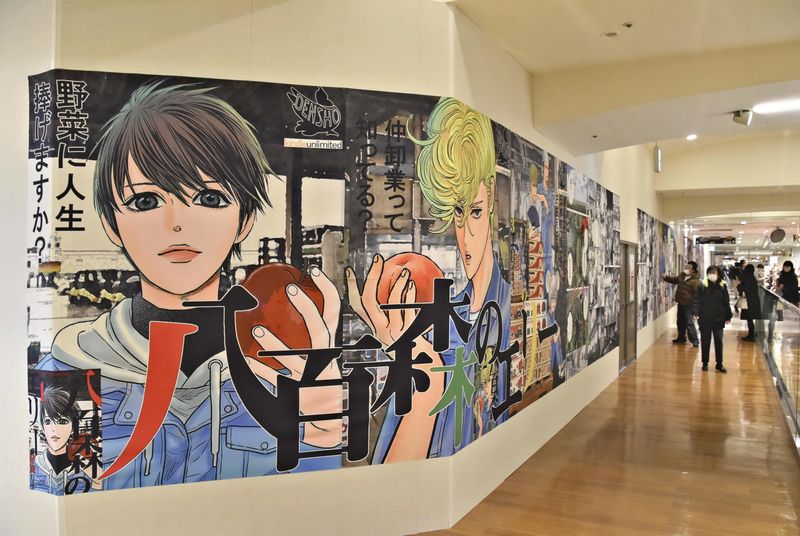 Manga by artists from Tochigi Prefecture are displayed at the Utsunomiya Paseo shopping building in Utsunomiya on Saturday. The Yomiuri Shimbun

Manga stories unfold as people walk by in Japan station

UTSUNOMIYA — An exhibition of manga by artists connected with Japan’s Tochigi Prefecture stretches for about 80 meters along the walls inside the Utsunomiya Paseo shopping building at the west exit of JR Utsunomiya Station.

The exhibition started on Feb. 15 and is part of the 30th anniversary of the building. A total of sixteen works are being shown — comprising creations by three manga artists from the prefecture and illustrations by students of the Bunsei University of Art in Utsunomiya. The works are displayed on temporary walls surrounding renovation work on the second floor.

The three manga artists’ work is set up so that passers-by can read the stories as they walk along. They include “Yaomori no Elie” (Elie of Yaomori) by Lina Kojika from Utsunomiya, which depicts wholesalers working at the central wholesale market in the city, and “marronni yell,” a manga about the prefecture’s local pop idols, by Sayaka Itsuki from Nikko in the prefecture.

“I hope this exhibition will give people an opportunity to get to know works by manga artists with Tochigi connections,” said Tomohiko Iguchi, 32, of the shopping building.

The exhibition will run through March 20.