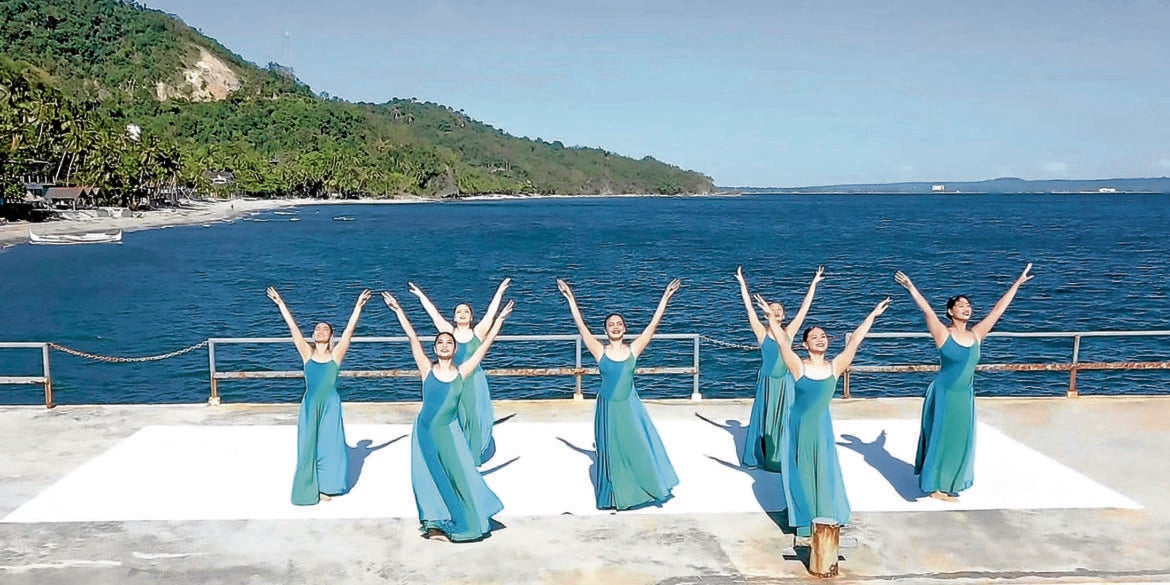 The dance sector has been most productive in these unusual times, performing Filipino ethnic and Western dances in open spaces, and shown online

Just before the world came to a halt due to the pandemic, Shirley Halili-Cruz gathered 10,000 dancers to perform “Unity Dance” in a bid for the Guinness World Record’s Largest Dance Contingent category.

The choreography reflected her vision as chair of the National Commission for Culture and the Arts-National Committee on Dance (NCCA-NCD) to embrace and promote dance groups from various regions and their diverse styles.

The participants studied a video of her choreography, set to the pop song “Sayaw (Dance)” performed by Davaoeña Maan Chua.

“Unity Dance” was to be performed before Guinness World Records officials in April last year in an open field in Pototan, Iloilo, but the global lockdown upended the judges’ travel plans.

Unwilling to waste all the effort poured into the project thus far, the NCCA-NCD produced a video version of the performance, with a legion of dancers—hundreds at a time—swaying arms, clapping hands, pivoting and shuffling in school corridors and in front of campuses. While those schoolyard shots and Cruz’s cameos in different regions were done before the pandemic, the completed “Unity Dance” video is interspersed with postquarantine footage of small student groups allowed by their local government units to participate. Physical distancing and other health protocols were followed.

She has not given up on the prospect of Philippine dancers landing in Guinness World Records, Cruz says. “But the officials have to be physically present to make a head count of the contingent, so we shall wait until the situation improves and restrictions ease up.”

In truth, not even a pandemic can pull this dance proponent away from her signature large-scale projects. The biggest NCCA-NCD undertaking so far during the quarantine is “Dance Xchange on Air,” a series of virtual concerts featuring groups nationwide.

From the comforts of their homes, via the Dance Xchange Facebook page or its YouTube channel, viewers may be transported to any number of locations: a forest in Pampanga to witness Mabalacat National High School boys reveling in the thrill of an Aeta hunting dance; a riverside in Negros where members of Busilak Dance Theater Company perform while carrying bunches of bananas in “Handuraw,” a festival favorite; a gravel-laden garden with couples from Binhilan Performing Arts Guild wearing barong and traje de mestiza executing the stately “Alcamfor” from Leyte; the beaches of Laiya, Batangas, with girls in blue gowns from Halili-Cruz School of Ballet twirling on the dock; or a transport terminal with South Avenue dancers grooving to hip-hop.

For the first season of “Dance Xchange on Air” (Oct. 24, 2020, to Feb. 1), the NCCA-NCD produced 27 shows, plus an international edition that reached 32 countries. It involved 262 groups and schools, and has been viewed by over 1.72 million as of this writing.

“We are proud that many of our videos are making waves in social media,” says Cruz. One such video is of Ligliwa Dance Group from Pangasinan, whose members, clad in simple T-shirts and baggy shorts, perform an intense contemporary piece in an open basketball court. The video has recorded half a million views.

Much earlier, in 2009, Cruz initiated the Philippine International Dance Xchange Festival, which consisted of special events participated in by enthusiasts from here and abroad.

The first festival was held in Dumaguete City, Negros Oriental, and has since been hosted by different provinces in order to make the event accessible to a wider audience. An average of 30 groups joined, half of them from Europe, Africa and elsewhere across Asia. Workshops were likewise organized for its generated audience of 25,000.

The festival ran for a decade until pandemic restrictions drove the festival to migrate online as “Dance Xchange on Air.” The concept was still to showcase Filipino ethnic and folk dances as well as Western ballet, contemporary, lyrical and hip-hop—performed in open spaces.

“This is our contribution to the dynamism in the dance community and our way of sustaining creativity,” says Cruz. “The atmosphere has generally become more collaborative and dance creations have become more meaningful and attuned to current realities. The dance sector has been restless, as have all the other arts, and eager to move forward.”

To be signed up, each group submitted a four-minute video of high-definition broadcast quality. Since the concerts were to be shown via Facebook and YouTube, the dance music had to be royalty- and copyright issue-free.

Postproduction process was tedious, to say the least. Cruz previewed all the videos and sent feedback to the groups. “I really meant to include everyone regardless of expertise levels, experience and artistic standards,” she says. “I believe in giving opportunities to as many as possible. So, one huge challenge was how to help groups whose dance videos did not meet our standards. Some had to make 10 revisions. In that sense, it became a mentoring session, too. We requested choreographers to fix some parts of the dances, or we asked the groups to improve video quality. Everyone was very cooperative.”

Each episode runs for over an hour and features 13 to 15 groups with Issa Litton, clad in Twinkle Ferraren’s Filipiniana tops, as host. The series has been cross-posted in other Facebook pages for wider reach.

Arts month and beyond

Commemorating the Arts Month of February, “Dance Xchange on Air” featured “The “International Conference/Webinar on Dance Research,” hosted by the NCCA Dance Division from Feb. 16 to 19. It consisted of 20 researches on global issues, best practices and postpandemic progress.

The division held “A Virtual Exhibit of Dance Costumes,” with historical and cultural annotations on Feb. 25.

“Buyogan Festival Dance Tribute to the Frontliners” is set in Buyogan Stage fronting the Leyte Gulf. She cites the tale of Spaniards landing in Leyte and asking the natives what the place was called. Thinking that the foreigners were asking about a swarm of bees, the locals replied, “Ah, buyog.”

Considering this prodigious output, Cruz is not bragging when she says that the dance sector has been the most dynamic and most productive in the arts community in these unusual times. She adds, “These programs also serve as a breeding ground for upcoming groups, especially those from other regions.”

Producing the virtual series is not without challenges. She notes fluctuating internet connections, audiences’ short attention spans, online coordination and logistics. On a personal level, she says, her drastically diminished mobility following a massive stroke in 2014 after an active life as a dancer and teacher has been quite the test, but one that she has in fact triumphed over.

In her own words, “I cannot walk unassisted. I cannot write with my right hand but I have learned to work with my left. And precisely because I am wheelchair-bound, I am compelled to be more imaginative and more innovative.”