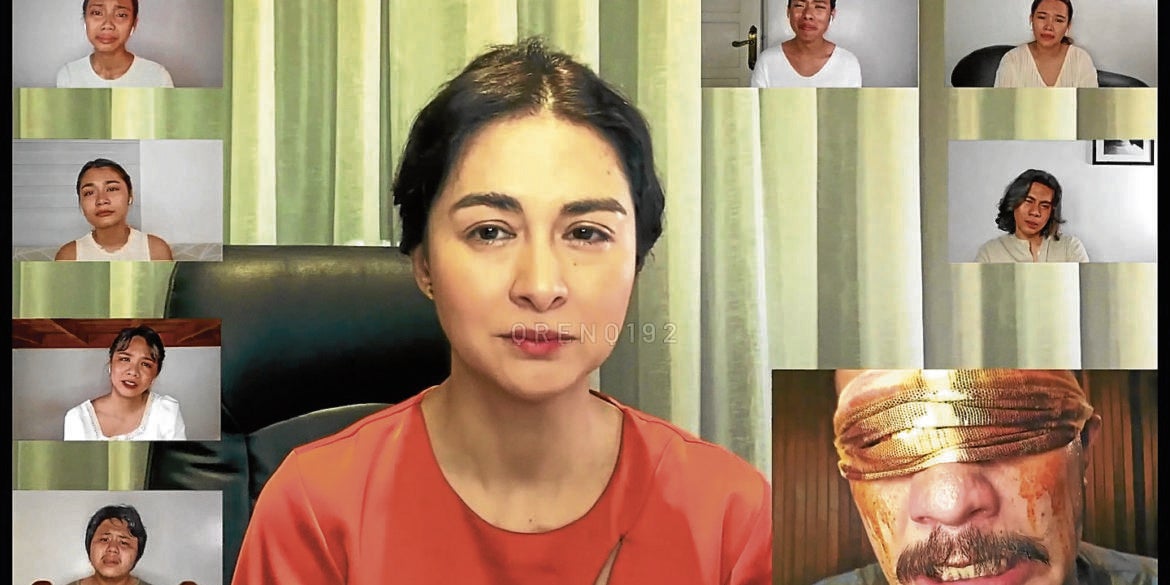 In an interview last month, actor-director Ron Capinding laid out the existential crisis that has gripped the theater industry for the past year: Either go virtual—“online and recorded”—or perish. With his new adaptation of Sophocles’ “Oedipus Rex” under Tanghalang Ateneo, Capinding more than averts this metaphorical death; he breathes fiery, forceful life into a strange, hybrid art form.

Sophocles’ tragedy is now “Password: Oedipus Rex,” styled “password: 03d1pu5_R3x” like a boomer reading challenge, and staged as a series of Zoom conferences unfolding in a digital, modern Philippines. What a ticket affords the viewer is an edited recording—a practical decision, given the erratic nature of internet connection in the country.

This “Oedipus,” however, is clear from the outset that it is foremost a creature of the stage. It embraces its theatrical roots, wasting no effort to adopt a more filmic realism and hide its desire to be mounted on an actual, physical platform. The performers act in the heightened vocabulary of stage performance, spouting the classical language of Rolando Tinio’s Filipino translation with no hint of trying to make themselves “small,” as is the norm in cinema. The result approximates the exhilarating experience of a front-row seat.Retains the basics

Capinding’s adaptation, which he also directs, retains the basics of the Greek classic. By now there is essentially no spoiling the story. The beginning sees Oedipus as ruler of his land, husband to Jocasta, and hungry for answers to his predecessor’s murder. By the end, he would discover that his predecessor was his father, whom he had unwittingly slain, and that his wife is his own mother.

It’s a tale as morbid as it is delirious. By twisting it just enough, tinkering with narrative bits and pieces, Capinding has made an adaptation that perfectly fits the Philippines we now know. He and his cast commit entirely to the transposition—and therefore make it wholly believable, even as seers turn up and ancient gods are invoked.

Oedipus is now president, hot-headed goon and self-confessed murderer, whose erratic behavior throughout the play is the very definition of small-dick energy. He hears what he wants to hear and does what he wants to do. In an ingenious piece of casting, his second in command, Kreon, is now a woman—whom he vilifies throughout the course of the story and blames for his predecessor’s murder. Around him—this play’s point of view—are adorers who will blindly support him to his very end. After the story has wrapped up, and Oedipus’ rule has ended, you suspect they might call for his reinstatement as ruler, even his eventual burial as a hero.

The Zoom format makes the play even more disorienting. Parts of it unfold as media interviews, some as press briefings, complete with introductions from a sort of press secretary. In these briefings, Oedipus rambles like a mad man, hurling accusations and curses left and right. You wonder at some point if he might start talking about drugs.

It’s not a perfect format, however. In one scene, for example, Oedipus screams at a seer who has appeared alongside him in a media interview: “Lumayas ka sa paningin ko!” Then the scene continues; nobody has left. Are we to believe that this impetuous Oedipus wouldn’t have just tossed his device to the floor and stormed off?

Another weakness of the Zoom format: You actually feel the script’s verbosity. Anyone who spent the past year working from home would be familiar with Zoom fatigue.

In an actual theater, we’d take in not just the performer delivering a monologue, but everyone and everything else around this performer. The Zoom play, on the other hand, almost demands that you glue your eyes to the screen, hyperfocused only on that one face speaking at length within that one box—and in this specific case, made no easier by the challenging baroque Filipino of Tinio’s script.

But somehow you don’t mind these weaknesses, which sound like nitpicking in the bigger scheme of things. Capinding and his creative team have more than surmounted the challenge of applying their skills for the theater to this so-called virtual stage. “Password: Oedipus Rex” not only sustains your attention; it grabs you by the neck, and pulls you into its world—which you willingly enter.

How can you not, with Yan Yuzon’s Oedipus at the helm? Yuzon is a hurricane in the role, as mesmerizing as he is frightening. Even his vilest words mean something, that you understand how he could amass such a following. Opposite him, as Jocasta, Miren Alvarez-Fabregas is the epitome of regal calm. Their scenes together, particularly the revelatory Act 1 ender, make you long for the day when we can finally return to the theaters—and hopefully watch these two titanic actors revisit these roles.

Speaking of performance, how is film and TV star Marian Rivera-Dantes—easily the main draw of the production—as Kreon? There’s a palpable reverence for the material that Dantes somehow doesn’t completely lose, which can make her come across as tonally insipid at times and sets her apart from the other performers who attack their roles with unrestrained playfulness. Nonetheless, it’s a capable performance that makes you hungry to see what Dantes would be like on the physical stage.

The original play carries in that scene heavy sadness—it’s Oedipus himself, after all, who begs Kreon to have him exiled. Watching it now, however, in this specific point in contemporary Philippine history, with our specific set of leaders, this scene rings quite differently: In the current scheme of things, it’s a vision of a kinder future. —CONTRIBUTED