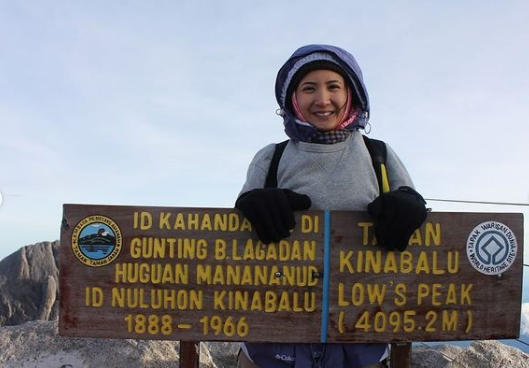 Actress Rica Peralejo has been reminiscing on some of the things she has achieved in life as she turned 40 today.

For her, it’s ok if she wouldn’t be remembered by her grandchildren for her work as an actress, as per her Instagram post yesterday, March 6, where she also showed a series of photos of her trips to various mountains.

“Well, I think it’s okay that they know I was an artista and that I made online content later on. But honestly, even if those are never mentioned it is okay for as long as they know that their Lola climbed many many mountains,” she said. “In this carousel alone I have Mt.Bulusan, Pulag, Mayon, Maculot, Pico de Loro, Pinatubo, Ugo, Kinabalu.”

Peralejo takes pride in being a mountaineer, adding that “these are pictures of myself I like very much, more than those I take in studios with all the works.”

“You may want to know why and the reason is simple. So many of the things I have achieved and done when I was younger really did not express who I really am nor the person I wanted to be. I guess that is what comes of a life that runs on duty but no calling,” she explained.

Peralejo learned what she really “wanted and valued” as she grew older and “[gained] the confidence to say no to other people’s dreams and started pursuing” her own.

More than being an actress who has her own impressive filmography, Peralejo said she wants her future grandchildren to remember her as “a mountain girl” because “those peak pursuits were all mine,” noting that “not even my husband was a driving force for me to do it.”

“It took me four decades to know and be settled with who I am,” she said. “So if you feel a little lost today, let me encourage you that it is never too late to find out who and Whose you really are.” JB

Rica Peralejo weighs in on stint as sexy star: ‘I did some really horrifying, not-so-proud-of things on screen’