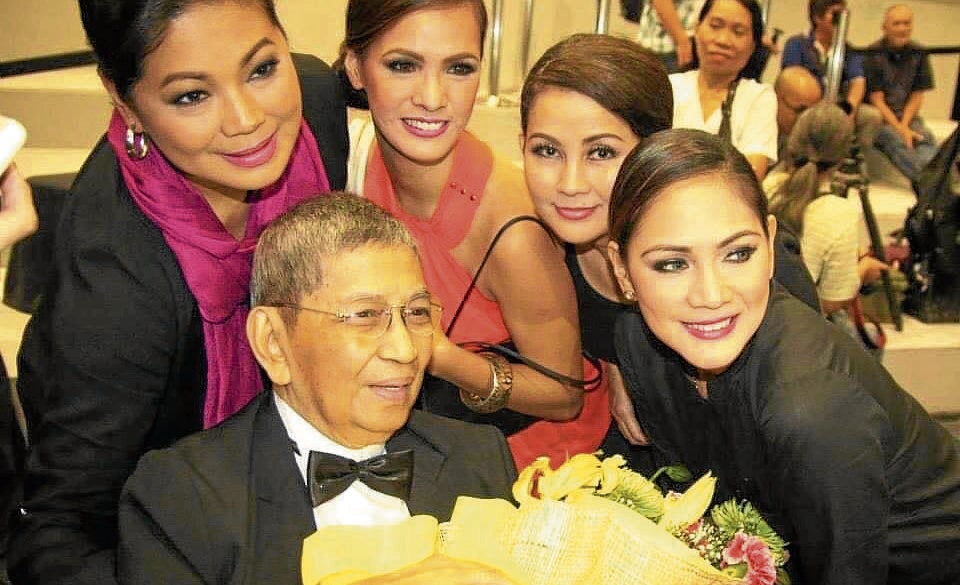 Models and muses relive moments with kind and fatherly ‘dean of Philippine fashion,’ who died March 6 at 88

Esteemed designer Ben Farrales, who gained a reputation for his deft use of Mindanao fabrics that he fashioned into evening gowns, died on March 6. He was 88. His grandniece announced her uncle’s passing on social media.

“Mang Ben to his protégées, associates, designers and models, as well as to his fellow devotees of the Sto. Nino and costalwarts in the world of arts and culture… was a compassionate and generous man,” Leanna Farrales-Carmona wrote.

“His volunteer work especially for the Philippine Red Cross as well as victims of calamities proved he looked beyond his personal glory in his practice in the practice of his talent and profession.”

Farrales and Mindanao fashion are so closely entwined because he grew up in his sister’s house in Cotabato where he recalled seeing women proudly wearing their malong and other traditional clothing. The images were seared in his consciousness and served as a wellspring of inspiration when he decided to put up his own shop in Mabini in the 1950s.

He became known as the “dean of Philippine fashion,” but for the models and the people he worked with throughout his decadeslong career he would always be Mang Ben—strict, punctual and formal but also kind and fatherly once you got to know him.

“I learned promptness from Mang Ben and I guess it’s safe to say that I learned it the hard way,” recalled veteran model Gem Padilla-Thomas.

“I was a newbie and I made the mistake of being late to my very first fashion show. Because of my tardiness on that first job, Mang Ben got me banned from doing shows for months. I was so scared of him that whenever he was around, my stomach would churn. But our relationship improved over time,” Thomas said.

“We were neighbors in Makati, we lived on the same street. The most intimate conversations I had with him were during the times he would hitch a ride home with me. We would talk about boys or the latest fashion chismis. And even years after, when I would do my run training around the village and I’d see him outside his house, I was comfortable enough to yell his name and say ‘Hi, Mang Ben!’ Old habits are hard to break, I suppose. So, each time I run past his street, I will probably still look up, prepared to yell hello.”

Her model friend and contemporary Patty Betita also had a rough start with Farrales who organized and oversaw Moda Maynila, the weekly series of luncheon shows held at Manila Hotel.

“This was my first show and I was so excited at the time. Another model, Mellany Carlos, and I kept peeping through the curtains because we wanted to check if our boyfriends were already in the audience,” Betita told Lifestyle. Little did they know that Farrales, who was seated at the back of the room, could see them peeping out from behind the curtains, their hair rollers still on.

“He went backstage and berated all of us. He demanded to know who it was he spotted walking around on stage instead of getting ready for the show. If no one came forth to admit it, he said that everyone would be punished.”

Betita and Carlos raised their hands and Farrales shouted at Betita, telling her she was banned from joining any of the shows. Mang Ben made good on his threat, but his heart softened months later after Betita greeted him on his birthday via an emissary.

“He invited me to a Christmas party at his house that year and I remember he even gave me a gift at the end of the night, a bathrobe,” she said.

Betita eventually became one of his regular models, and would close his show decked out in bridal finery.

Pillar of the industry

“It was always an honor walking for Mang Ben. The younger generation of models might not be familiar with the dean of Philippine fashion but he was one of the pillars of the industry,” Benipayo said.

“I met Mang Ben in May of 1986, during the annual Flores de Mayo at the Manila Hotel. I wore a white short dress with chiffon train by Danny dela Cuesta, which other designers said was inappropriate. Before the announcement of winners, Mang Ben approached me, introduced himself, and told me I would have a title. I became the first ever La Flor de Manila.

“He was instrumental in my being able to do the Manila Hotel luncheon shows, which ran from the ’80s to the early ’90s. He also designed the national costume I wore for the Miss World competition in 1992.”

As Farrales grew older, he struggled with names, but Benipayo was one of those he still remembered.

“Mang Ben always believed in me and allowed me to explore my capacities as a model. He was very kind to me, funny at times, at the same time very professional in his ways. I am very blessed to have known him,” she said.

Publicist Gwen Jacinto used to work in the PR office at Manila Hotel during the height of Moda Maynila and remembers how Farrales was very organized and followed a strict schedule.

“He was down-to-earth, soft-spoken and had genuine concern. He was a visionary and celebrated the best of Filipino beauty, artistry and culture in his work. He also supported many charities and gave honor to the Sto. Niño,” Jacinto said.

“There’s so much to say about Mang Ben but it’s really his kindness that cannot be left unsaid.”

Whenever she would see him in other events years after she had left the hotel, he would always leave what he was doing to approach her and say hello, ask how she was doing.

“One memorable moment was when I visited him in his shop to see how he was doing, and in our conversation he said, ‘Akala ko hindi ka na maabot, dear. But for you to remember an old man like me on a random day speaks much of your character. Hindi ka nagbabago, hija.’”