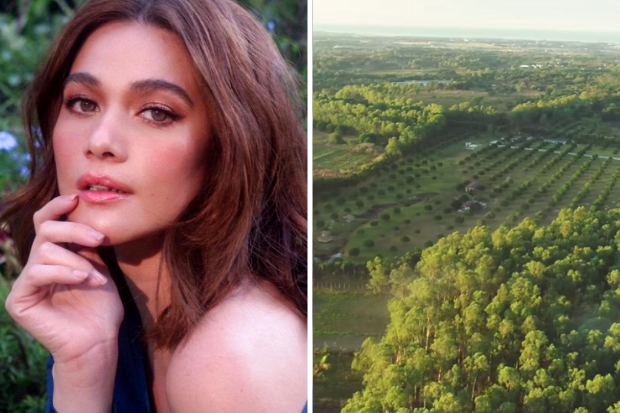 Bea Alonzo gives tour of her organic farm in Zambales

Bea Alonzo recently gave a tour of her sprawling 16-hectare farm, which boasts mahogany trees and a scenic mountain view.

The actress gave her fans a glimpse of her Beati Firma farm in her latest YouTube vlog which premiered last Saturday, March 13.

She said that they acquired it in 2011 and that there was nothing planted save for a single tree. The actress discovered the place through veteran actress Isabel Rivas.

“At first, back then I was very young,” she recalled. “Naisip ko, kaya na ba naming mag-farm? Is it worth it or matutukan ba namin?”

(I thought, can we farm? Is it worth it or can we stay focused on it?)

Their hard work over the years has paid off.

“We are so glad that we bought this piece of land. It is so beautiful,” she said, noting that she was helped by friends like a retired American soldier who helped them fence the perimeter of her farm.

Part of her farm is filled with nearly 5,000 mahogany trees. They are 8 years old now.

“They’re actually good investments because in the future bibilhin siya ng furniture designers (furniture designers will buy them) for a very, very good price. Aesthetically, ang ganda niyang tingnan (they are beautiful to look at),” she said.

Alonzo credits her mom for making the farm a sight to behold.

(It’s cute because it was like she was doing Farmville. The distance of the trees were perfectly placed.)

Her mom also put up signs to their houses — one of them is House of Basha, in reference to her character in “One More Chance.” Alonzo surmised that the sign is meant for the guest house.

She takes pride that her farm is all-natural and “earth-friendly.”

“I’m very proud to say that we have an organic farm. We don’t do feeds. We don’t do antibiotics. We also don’t do sprays or insecticides. We don’t use them for our farm,” she said.

Other features of the farm include a cattle pen where cows graze freely, mango trees and solar-powered light posts. NVG

Bea Alonzo on why John Lloyd Cruz is ‘hot’: ‘I’m attracted to him intellectually’