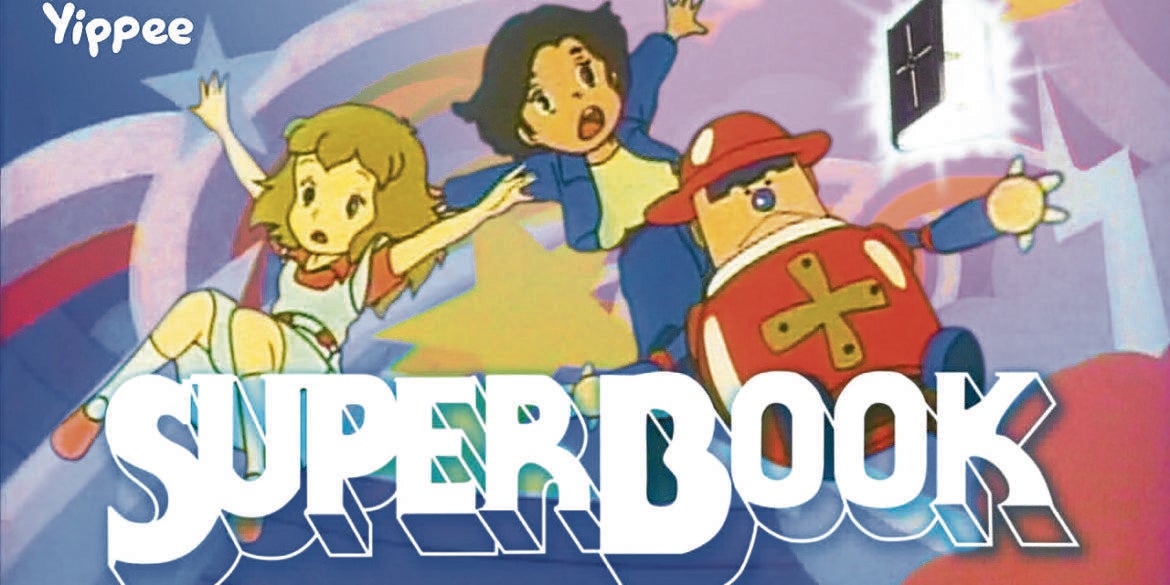 ‘The classic episodes of ‘Superbook’ didn’t age well. For instance, the story on Samson had scantily clad Delilah doing a dance with men catcalling’

As consistently as possible, I try to read one Filipino book and one Bible story to my 5-year-old Juno and 10-year-old Jack before bed.

I also let them watch a short video from the Filipino Fairytales channel on YouTube to boost exposure to the language and get them used to a variety of situations and contexts. We just take care to select stories for below 13 years old as the very deep library includes content for older kids, too.

While we can grow our collection of Filipino stories physically and virtually, the Bible is pretty much it. Having read and reread three different children’s Bibles generously given by friends through the years, it was time to refresh our approach.

I remember watching “Superbook” and “Flying House” as a child and was happy to see it was on YouTube.

For non-Gen-Xers, “Superbook” is an ’80s Japanese cartoon series about a boy named Chris, his neighbor Joy and their toy robot Gizmo. They travel back in time via a magical Bible and learn lessons from the biblical time they are sent to, that parallel whatever tween troubles they are experiencing in the present.

“Flying House” is a spin-off from “Superbook” about a boy named Justin, his friend Angie and her brother Corky who are playing in the woods when it rains. They seek shelter in a house owned by a professor with his robot S.I.R. The house turns out to be a time machine that sends them back to various Biblical times with every attempt of the professor to bring them back home.

Both aired on local TV channels GMA-7 and ABS-CBN.

“Superbook” was redone in 2011, swapping the beloved cartoon’s classic anime style for slick CGI and futuristic storylines to appeal to a new generation. The reboot has been translated into many languages, including Filipino.

The Batang Superbook channel on YouTube has released 13 episodes in Filipino. The “Superbook” reboot in English has 26 episodes (Seasons 1 and 2) on YouTube, of the 66 total from five seasons so far that have aired on the Christian Broadcasting Network in the US. The sixth season will be aired this year.

The target audience for “Superbook” is 6-11 years old. My kids first saw the reboot in Filipino and took to it right away. The show’s theme song “The Salvation Poem” is catchy, both in English and in Filipino, and my daughter loves to sing it.

In the reboot, Chris and Joy are 12-year-olds who experience typical preteen problems such as fitting in, cheating and peer pressure in situations more relatable to today’s kids.

I thought my kids would be bored watching classic anime-style cartoons and scenarios, especially after having seen the CGI version first, but they adapted and learned to appreciate both the humor and the dark themes.

I’ve had to adapt, too. In reading stories to them, I get to make my own commentary as we go, to explain the polygamy and son-sacrificing. In passively imbibing a cartoon, I still had to do a similar debriefing.

Rewatching the classic episodes as a parent, I realized how they didn’t age well. For instance, the story on Samson had scantily clad Delilah doing a dance with men catcalling, “Yeah, Delilah, that’s delicious!” among other questionable scenarios. Understandably, this episode didn’t get a modern-day take.

The parents and adults classic Chris and Joy encounter are also more dismissive, authoritarian and even violent in their treatment of children. These, my kids noticed. “Chris’ dad is mean!” they’d say, though back in the day, this probably just went over our heads.

In Abraham and Isaac’s story, classic Chris and Joy actively attempt to stop Abraham, who roughly pushes them away. In the reboot, they get lost and end up as hapless observers.

Also, in the CGI version, the parents of the leads are paragons of positive parenting; they are calm and never yell (ha!). Even the adults they encounter in their time travel seem to always know the right thing to say and treat them well.

Gen X parents raising Catholic/Christian families would appreciate watching the reboot and sharing this blast from their past with their children, especially during this Lenten season. —CONTRIBUTED