The A to Z of fan fiction | Lifestyle.INQ ❮ ❯ 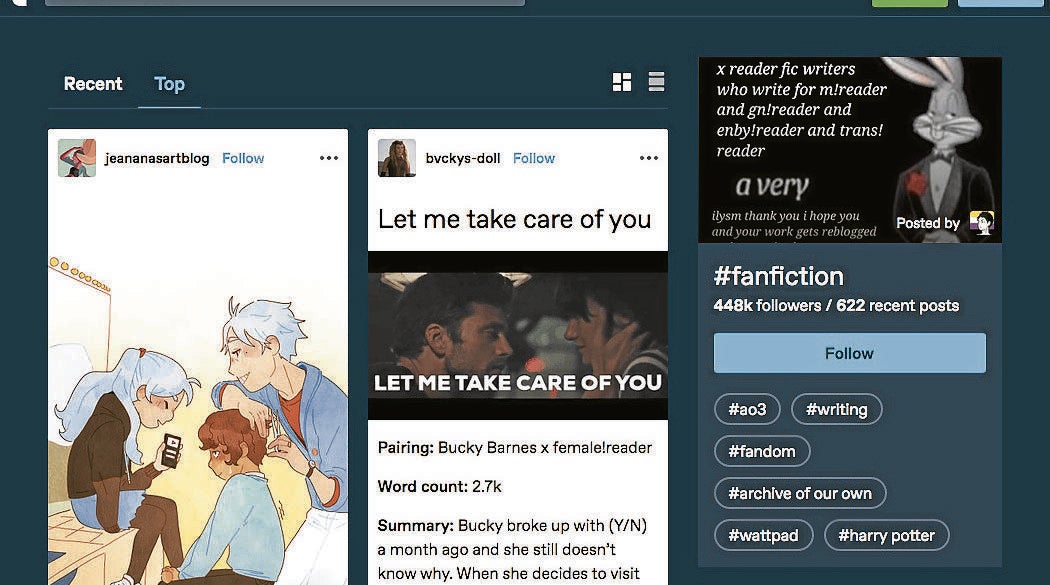 There’s a lot of fan fiction on Tumblr.

The A to Z of fan fiction

Whatever generation you belong to, you’ve read, heard of or encountered fanfic. Here’s a guide to that world

Whether you’re a millennial, a cusper, a Gen Z-er or someone from other generations, I’m sure you’ve encountered, heard of or read fan fiction—or fanfic for short—somewhere, somehow. Fanfic are stories written by fans of any show, band, book, musical, etc., for themselves and for other fans. They can come in many forms. Here’s an A to Z guide to the world of fan fiction.

These are stories that take place out of the canon timeline or universe where the original story happens. For instance, you could write anime fic inspired by “Haikyuu!!” but set it in a fantasy world where fairies and magic exist.

A very sad type of fanfic with no happy ending. It often deals with sensitive and triggering topics. If you want to cry, read angst.

A very popular site for hosting fanfic and holds many good pieces from all kinds of fandoms. It is known for lengthy chaptered fics and is somewhat the holy grail of fanfics and fanfic writers.

When a fic has this tag, it means that it is a beta-ed fic—that means that there have been revisions in the fic.

The real timeline and setting of a story. If a fanfic follows the canon timeline, it means that it is following the real events that take place in the original story or show by the original author.

A short story that’s usually less than a thousand (or even five hundred) words. These are usually written by authors with a prompt—a short line, a word, a theme or such—in mind.

One of the most common tropes in fic writing. In these stories, characters begin as rivals or enemies before becoming friends and falling in love with each other.

The opposite of Canon, meaning this story won’t exactly follow the same storyline as the original but will usually be within the realm of the original universe.

Stories in the fic universe that are so sweet they’ll make your teeth rot. They will make your heart pound and have you feeling giddy.

Another popular trope where the characters get hurt but the story will ends on a lighter note.

A way of supporting or giving likes on a story on the platform Ao3. These can be given by both Ao3 account holders and nonaccount holders.

A reader who always reads an author’s work but does not leave any likes or comments on the author’s page or account.

A common type of AU in the fic scene, these are usually patterned after Greek mythology stories like Persephone and Hades or Orpheus and Eurydice.

No beta we die like (*insert fandom joke here*)

A very famous Ao3 tag that has many variations on the site based on different fandoms. For instance, a “Genshin Impact” fanfic can have a tag like “No beta we die like Rex Lapis.”

A fic that is only one post long. It can range from short ones at a thousand words to one-shots with 10,000 words each. Prompts

Lines, themes and just about anything that can be used to inspire a writer. Others often use prompts to send in requests for authors to write about specific characters.

A site where most of the older fics are posted although some newer ones also get posted here. It is a known site among writers but not as used as Ao3 or Tumblr nowadays.

One of the most loved tropes for its many variations like the red string of fate and first word tattoos. Personally, this is one of my favorites.

A modern AU that imagines characters using social media. It is more of a visual fic than a lengthy written one. It is one of the more popular forms of fics or AUs right now.

Ship (from the word “relationship”) are two characters that fans want to see in a romantic relationship. Ship fic is fic that focuses on canon or fanon ships from shows or books. An example would be Ron and Hermione or Ginny and Harry from the Harry Potter series.

A blogging site many use for posting fics and creating bonds with fellow writers. Tumblr is one of my favorite sites to read fics because of how many cool writers I can see on the site and the good and consistent stories that are on it.

The most famous type of fanfic where a reader can put themselves in a character’s place and read the fic as if they were the one in the story. Most readers like these types of fics because it makes you feel like you’re there, just for a moment.

Meaning your/name. In an X-Reader insert, Y/N is placed so readers can imagine their own names in the stories. Other place holders include f/c (favorite/color) or b/f/n (best/friend’s/name).

I hope you enjoyed some of the common terms you would encounter in fanfics! Fanfics bring each author’s imagination to life and it can help them make others smile and feel different emotions. Fanfics are a colorful but also dark part of our Gen Z/millennial culture and we wouldn’t have it any other way. —CONTRIBUTED