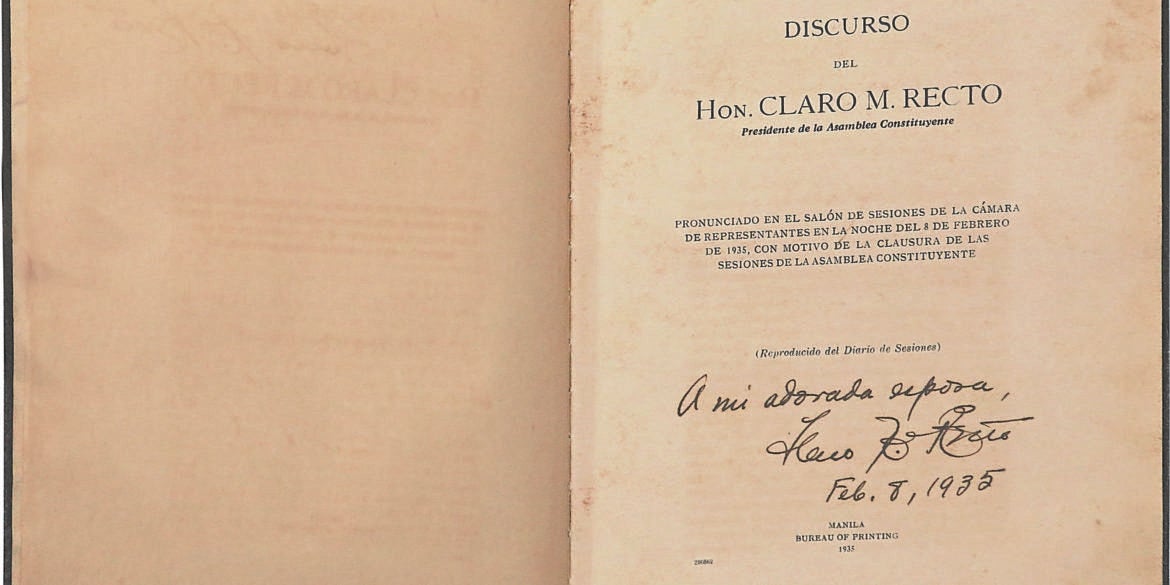 An original copy of the 1935 Constitution dedicated to Claro M. Recto’s wife, Aurora

Claro M. Recto’s personal copies of 1935 Constitution up for bids

On July 30, 1934, 200 men met in the Legislative Building to write one of the most important documents in Philippine history, the 1935 Constitution. The delegates of the 1934 Constitutional Convention were elected by the people to frame the fundamental law that created the commonwealth government and began the nation’s road to independence from American rule.

But this task was not without its controversies and conflicts. It began with what convention president Claro M. Recto said were “seeming antipathies, partisan jealousies and clashes of minds,” and ended with “the triumph over the passion of the moment.”

The writing of a constitution was decreed by the Tydings-McDuffie law as a step toward Philippine independence. The law was passed by the US Congress and accepted by the Philippine Legislature on May 1, 1934.Elections for the convention delegates were held on July 10, 1934. Women were not allowed to vote or run to be a member of the convention.

Some of the debates ended up in heated arguments. The most controversial and probably the longest was the issue of women’s suffrage.

Debating and amending the draft Constitution ended on Jan. 31, 1935. On Feb. 8, 1935, the adoption of the Constitution was put to a formal vote.

Recto announced the final tally: 184 ayes and 1 nay. Nevertheless, the Constitution was approved.

Before the convention closed, a final resolution was passed scheduling the signing ceremony for Feb. 19, 1935, but allowing delegates to sign copies beginning Feb. 9, 1935. There were copies in two languages: English and Spanish. Aside from the official ones, 200 copies were signed for personal libraries and government institutions.

The signing ceremony was a momentous event, with radio broadcast nationwide. Each delegate was called before a table where the copies of the Constitution were laid out. A dramatic moment came when delegate Gregorio Perfecto signed the document with his own blood.

The 1935 Constitution was approved and signed by US President Franklin Roosevelt on March 25, 1935, before American and Filipino officials headed by Manuel L. Quezon. It was ratified by the Filipino people in a plebiscite on May 14, 1935. The Constitution was launched on the same day the commonwealth government was established on Nov. 15, 1935. On Feb. 7, 1936, Commonwealth President Quezon signed Proclamation No. 36, declaring Feb. 8 Constitution Day.

The 1934 Constitutional Convention was a political triumph for the Filipinos. It was a unique and historical moment that opened a new chapter in the story of the nation.

On April 10 and 11, Leon Gallery (leonexchange.com) will place on the auction block four valuable documents of this historic occasion.

Formerly from the estate of Sen. Claro M. Recto through former Batangas Vice Gov. Ricardo Recto, the documents are three original copies of the 1935 Constitution (both English and Spanish versions).

One is the copy for Recto as convention president complete with all the signatures of the delegates; another is a signed copy that he gave to his wife, Aurora; and last is a copy heavily annotated by Recto in his own handwriting of his opinions on the different constitutional provisions.

The last item is Recto’s personal copy of his own valedictory delivered at the convention’s closing. It was in this speech delivered in Spanish that he extolled the work done on the new Constitution, and the work of his fellow delegates who, as he pointed out, overcame their passions and prejudices to give “way to the unanimous desire to render the greatest service to the country.” —CONTRIBUTED