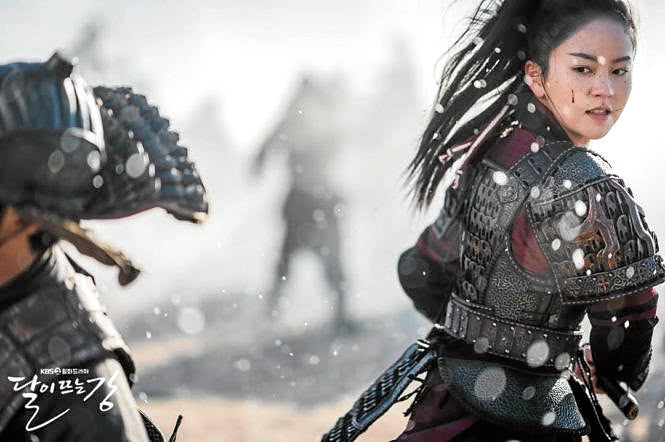 Kim So-hyun in “River Where the Moon Rises”

Recent and ongoing Korean series have female characters worthy of admiration. They are unafraid to make tough decisions; they are go-getters and ball-breakers. Here are a few of them.

In “Vincenzo,” Hong Cha-young will do anything to win legal battles and she usually employs tactics uniquely hers. Her father calls her tenacious, and she said that was exactly what she needed to be to win cases against big corporations who abuse the people under them.

In an interview, actress Jeon Yeo-bin told the Philippine press that her character Cha-young has a lot of qualities that will make people crush on her. After a few episodes, we now know what she meant.

Cha-young’s the only person who can order Vincenzo Cassano (Song Joong-ki) around. She is very witty and adjusts to any situation quickly.

What we love most about her is the way she never loses her composure, not even when she is thrown in jail.

This young badass royal deserves her own Disney flick, but the VIU original series “River Where the Moon Rises” is not too shabby, either.

The interpretation of this popular Korean folktale has the princess wielding knives and other weapons. She is an accomplished warrior who can bring grown men to their knees.

Princess Pyeong-gang (Kim So-hyun) is a natural community planner. She comes up with suggestions on how the people living in the Ghost Village can lead better lives.

Girl from the future

Seo-hae travels to the present to save her future. She is the only one who can change the past in “Sisyphus: the Myth.” Think “Terminator.” Only Park Shin-hye, who plays Seo-hae, is the Terminator, while genius CEO Han Tae-sul (Cho Seung-woo) is Sarah Connor.

Seo-hae has a no-nonsense attitude. Her fashion sense is quirky but even that reflects her dark past. Her childhood was interrupted by a devastating war, therefore she never outgrew her girlish styles. She decorates her guns with pink glittery stickers and red LEGO blocks.

What we love about Seo-hae is that she knows what’s important in life. She throws bundles of money into the trashcan like worthless paper, but she’d give up her life to save her loved ones.

Love her decision or not, Kim Jo-jo (Kim So-hyun) has made her choice.

In a world where everyone is dependent on the “Love Alarm” for truth, Jo-jo installs a Shield that will protect her feelings from getting revealed. She defies the algorithm when she uses a Spear on a person to ring his Love Alarm.

When she is given the ultimate gift of choice, she makes it using both her head and her heart. In the world she lives in, technology and feelings are deeply intertwined. People have become lazy in expressing their thoughts and rely on an app to do it for them. But Jo-jo goes against the norm of her world.

Her experience makes her unique because it makes her look into herself deeper. When she finally makes a decision, she knows it’s the right one. Introspection is a scary thing because you discover things about yourself that you do not like. But Jo-jo faces all her weaknesses and fears head on.