Estrel’s turns 75: ‘She was teaching, preparing us for the future’ | Inquirer Lifestyle ❮ ❯ 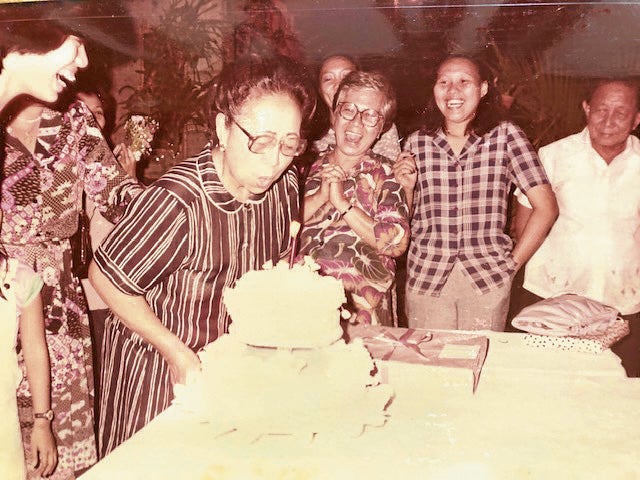 Estrella N. Ylagan celebrating her birthday in the early ’80s

Estrel’s turns 75: ‘She was teaching, preparing us for the future’

For three quarters of a century, Estrel’s has been synonymous with caramel cakes. The luscious confections from the Quezon City-based bakeshop have occupied pride of place on hundreds of dining tables and helped mark countless milestones in the lives of Filipino families.

The business started 75 years ago by Estrella N. Ylagan steadily grew from a small kitchen in the 1950s to a much larger, more streamlined one a few years ago on Scout Tobias, Quezon City.

Her nieces, Joy and Gina Navarro, took over after Ylagan passed away, but the look and taste of a caramel cake from Estrel’s has remained essentially the same. Whether topped with the pastel rosebuds or the tiny sampaguita blooms made of buttercream, the cake is always fluffy, creamy and buttery but never too sweet.

Ylagan was a formidable woman who knew what she wanted and had a singular vision when it came to aspiring for it. You can see it in the perfectly spaced flowers, the deliberate icing squiggles on the sides of the cakes, and the elegant icing script.

“She was strict and a perfectionist in the kitchen,” her niece Joy Navarro recalled in an interview with Lifestyle. “Her booming voice when someone made a mistake was enough for anyone to remember not to commit the same one.”

Outside the kitchen, however, Tita Estrel loved to entertain family and friends.

“Birthdays and death anniversaries were marked with anything from simple to elaborate lunches or dinners, always prepared in her kitchen. We learned table service and setting from her, too. She wasn’t much of a businesswoman. Her mantra was ‘not to do anything in commercial quantity lest it affect the quality.’”

Navarro said that when she and her sister were younger, they didn’t think they would be directly involved in the business. As grade schoolers in the ’50s, they had other things to contend with. On weekends, however, Ylagan would make them bind sugar flowers and ribbons into small bouquets for wedding cakes.

“These sugar flowers were piped on threaded wires and were not easy to twist with our tiny fingers. We started learning to pipe out simple strokes with icing sugar. She was teaching without us realizing that she was preparing us for the future,” Navarro said.

“It was a time when children really just obeyed their elders without question. She would always say that one should always be productive, never idle. She was attentive to details that others probably took for granted. Unknowingly, perhaps, she left us the values of hard work and a drive to accomplish something,” she added.

They may have not been appreciated at the time but these early lessons from Tita Estrel would later serve the Navarro sisters in good stead. That they’re marking 75 years during a pandemic is, indeed, cause for a celebration.

Like many businesses, however, they had to shut down when lockdowns due to COVID-19 were announced in March last year. They only reopened in early May hoping to attract those wanting to order a cake for Mother’s Day, traditionally celebrated on the second Sunday of May.

Craving a sense of normalcy

“The lockdown definitely took its toll on so many of us. Celebrations were thus even more essential in 2020. People had to find ways—no matter how simple—to have a certain sense of normalcy,” Navarro said.

The Navarro sisters were up to the task, because they knew how something as simple as a delicious and mindfully decorated cake could help lift flagging spirits.

“It’s an understatement to say that Estrel’s has been sustained by generations of clientele who grew up with the caramel cake. In a sense, perhaps Estrel’s has become part of that ‘normal.’ Christmas last year really impressed that on us even more, pandemic notwithstanding.

“We still gush whenever clients say how Christmas is never complete without the caramel cake. And it thrills us no end imagining how many noche buena feasts had our caramel cake. There’s something about being a fixture in family celebrations. We’re nothing but grateful, really,” Navarro said.

“Tita Estrel really set the standard high for us with her caramel cake. Coming up with something that can even come close is a dream, definitely. For now, we believe that improving how we do things is the more immediate goal.”