Vin Abrenica is used to changing a baby's diapers, and here's why | Inquirer Lifestyle ❮ ❯ 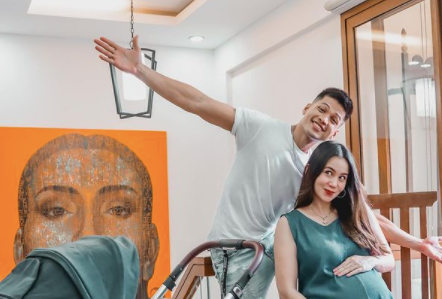 Vin Abrenica is used to changing a baby’s diapers, and here’s why

Actor Vin Abrenica did not really have to make major lifestyle adjustments now that he is a father. For one, changing diapers is something he used to do in the past.

(Actually, I am quite used to it, because I have younger siblings whose diapers I used to be the one to change.)

Abrenica said the bigger problem was how to get sleep when his daughter was born, but after a few days, he got used to the lack of sleep. His girlfriend, actress Sophie Albert, just recently gave birth to their bundle of joy.

(About the lack of sleep, it’s been five days of no sleep, but the first two days, I really could not take it. I already get cross-eyed, but now, I can already handle it. My feeling is although it can be really tiring, it’s the most rewarding thing now.)

As the pandemic still rages on, Abrenica acknowledges that so many changes, and big ones, happened in his life. His baby takes much of his time these days, which he is happy about

“I have all the time in the world,” he said. “Nakapag-alaga ako ng buntis. Ngayon, nag-aalaga kami ng bata.” (I was able to take care of a pregnant woman, now we are taking care of a baby.)

Meanwhile, now that there is a vaccine for COVID-19, Abrenica admits being apprehensive about it. He expressed that he will only have his child vaccinated once it is clear that the vaccines are safe and would not cause harm.

Amid the pandemic, Abrenica also tried his hand at cooking, although he failed.

“Hindi ko kinaya. Hindi ako marunong,” the actor said. (I could not do it. I don’t know how.)

“I tried doing the buffalo wings and I failed. It turned out sobrang alat at may dugo (too salty and had blood),” he recalled.

Abrenica will be playing the role of a nurse in “Nelia.” The film is directed by Lester Dimaranan with a screenplay written by Atty. Melanie Honey Quiño, from A and Q Productions Film, Inc. It also stars Winwyn Marquez, Ali Forbes, Dexter Doria, Lloyd Samartino, Mon Confiado, Shido Roxas and Raymond Bagatsing. JB

WATCH: Vin Abrenica admits he once got jealous of Derek Ramsay