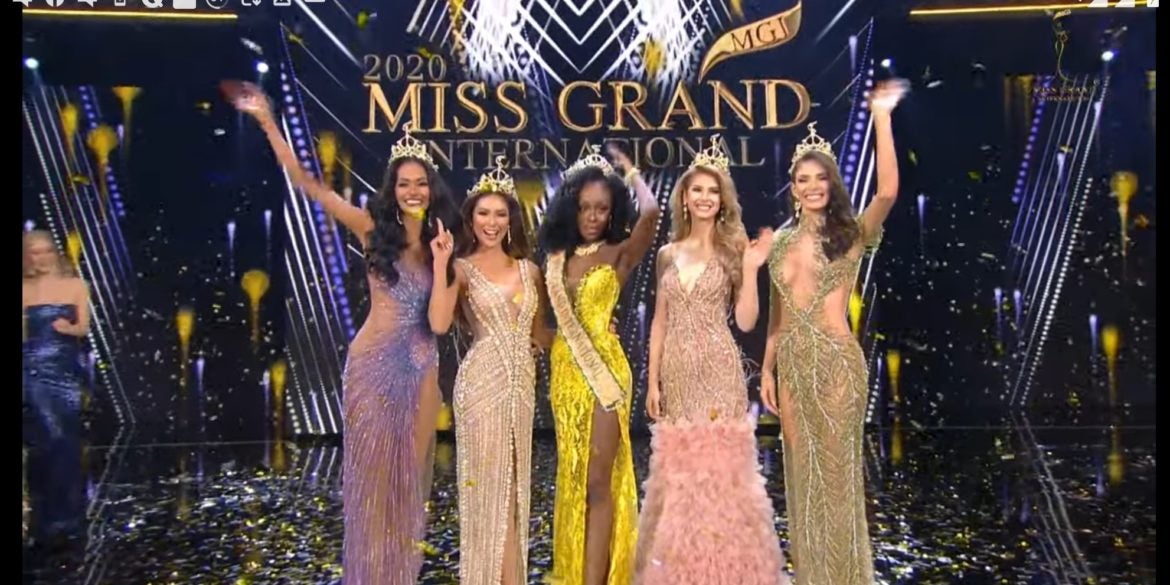 Miss Grand International Abena Appiah of the United States (center) poses with her runners-up (from left) Aurra Kharishma of Indonesia, Samantha Bernardo of the Philippines, Ivana Batchelor of Guatemala, and Lala Guedes of Brazil./SCREENSHOT

From just a competition showcasing the beauty of contestants, today’s pageant competitions have evolved into platforms for them to bring attention to their causes or advocacy.

This year’s Miss Grand International pageant held at the Show DC Hall in Bangkok, Thailand, on March 27 proved to be no exception as Miss Myanmar Han Lay appealed for help for her country. Daily protests have broken out against the military, which staged a coup last month and ousted newly elected leaders, including Nobel laureate Aung San Suu Kyi.

The pageant was staged on the bloodiest day of the protests so far as military forces opened fire on crowds, killing at least 90 people, including children.

“I deeply feel sorry for all the people who have lost their lives. Please help Myanmar. We need your urgent international help right now. Let’s create a better world. May the world be at peace with Myanmar,” a teary-eyed Han said.

Even the pageant’s winner, Abena Appiah of the United States, made a political statement by wearing a dress inspired by the “Black Lives Matter” movement for the national costume competition.

The 27-year-old antibullying advocate was the global pageant’s first black winner. The contest has been dominated by Latin beauties, with six winners coming from South America and the Caribbean.

Appiah bested 62 other delegates to inherit the “golden crown” from Venezuela’s Valentina Figuera, who won in 2019.

Binibining Pilipinas Samantha Bernardo settled for the first runner-up spot in what may be considered the swan song for the 28-year-old pageant veteran.

During the final round of questioning, the Top 5 contestants were asked whether they would choose to close their country and risk economic collapse during the COVID-19 pandemic, or leave it open but vulnerable to health risks.

Appiah said she would “shut down the country, because I believe that people come first,” adding that this would allow enough time “to analyze what is going on and provide for my people.”

As for Bernardo, she said she “will always choose the people, because without its people, the country will never be a country.” INQ