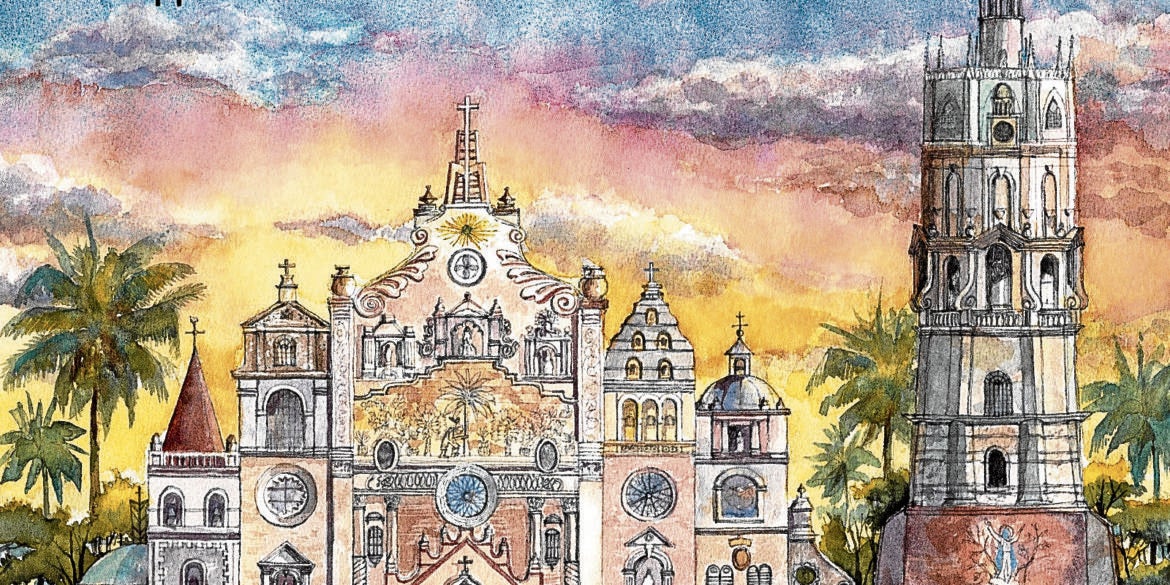 Gorgeous book is a ‘Visita Iglesia’ of heritage churches

‘While temples and stupas may be the architectural icons of much of Asia, the church is arguably the Philippines’ most distinctive building’

Very timely and entertaining reading for both Lent and the quincentennial this year is “Simbahán: An Illustrated Guide to 50 of the Philippines’ Must-Visit Catholic Churches” by church historian Regalado Trota Jose and with illustrations by architect-artist Allan Jay Quesada.

Published by RPD Publications and available at Solidaridad Book Shop (tel. 82541068), “Simbahán” is a virtual Visita Iglesia of the country’s most historically and culturally significant Catholic churches across 10 regions, from Northeastern Luzon down to the Visayas and Mindanao—from St. Charles Borromeo church on Mahatao, Batan Island in Batanes, to St. Peter Alcantara church in Pakil, Laguna, and the Minor Basilica of St. Michael the Archangel in Tayabas, Quezon, then farther down to Immaculate Concepcion church in Guiuan in Eastern Samar and John the Baptist Church in Jimenez, Misamis Occidental.

The ignorant but arrogant who attack commemorations of the quincentennial because Christianity allegedly brought with it colonialism and vice-versa, should read the book. Christianity and European colonization were the key formative forces in the rise of the Philippine nation. Jose writes that Filipinos have been able to indigenize the Spanish (and Greek-Latin) iglesia/ecclesia into “Simbahán,” and that churches best set apart the Philippines in Asia:

“While temples and stupas may be the architectural icons of much of Asia, the church is arguably the Philippines’ most distinctive building. Through three hundred and fifty years of Spanish rule, the indigenous names for places of worship were retained, instead of the Spanish iglesia. The word for ‘church’ in much of central and southern Philippines, simbahán—accented on the final syllable—was chosen for the book’s title, a conscious move away from the Manila way of naming things (which accents simbahán on the middle syllable). The word itself developed from samba, to worship.”

Against baseless charges that the missionaries and colonialists brought with them nothing but backwardness and obscurantism, Jose shows that the churches are in fact engineering and creative marvels. Professional architects only arrived in the 19th century, so “(t)he designs for the churches and their decorations were drawn up not only by the priests and their assistants, but by military engineers, and Chinese and local maestros de obra (foremen).”

Missionaries and colonialists took into account local conditions and materials. “Local climatic and geologic conditions tempered the height, width and silhouette of constructions,” Jose writes. “A popular material was adobe, cut from volcanic tuff quarries, and quite distinct from its Latin American namesake of blocks formed from dried mud and straw. Layers of lime plaster or palitada protected walls from weathering. Palitada was also applied over tabique pampango, thin upper walls made of interwoven bamboo slats or split mangrove wood.”

In the case of the famous Tumauini church in Isabela, built in the mid-1700s by the Dominican friar Fr. Domingo Forte, “son of a Catalan engineer,” kilns were set up to bake bricks. Jose notes: “Brick walls of the churches built by the Dominicans throughout Cagayan, even without plaster protection, are more durable than those in Ilocos… The resulting complex at Tumaini represents the height of brick artistry in the Philippines.”

When San Agustin church in Manila and three other Augustinian churches were inscribed in the Unesco World Heritage List in 1993, Unesco invariably defined their architectural style as “fortress baroque” and “earthquake baroque,” which should show that Philippine churches have a style and makeup uniquely their own. The baroque element carries as well in the churches’ ornamentation, which, Unesco said, is “brimming with cultural motifs from the western world along with traditional elements.”

Each chapter opens with a map of the region that shows the location of each heritage church. Every entry identifies the church not by its popular name but by its patronal dedication; included as well are its location and feast day.

The Bacolor church of Pampanga, famous for being the church of the town that became the temporary capital of the Philippines during the British invasion in the 18th century, and further made famous by the Pinatubo eruption of 1991 that almost buried it, is identified as the “Parish Church of St. William of Aquitaine (San Guillermo de Aquitania).” (Why was the church named after an 8th-century French duke? One logical guess is that he had fought the Saracens, so the Spanish missionaries, fresh from the Reconquista, might have wanted a martial saint who could inspire Filipinos in warding off Moro raiders and slave traders.)

In each entry, design aspects of the façade and interiors are pointed out. The Unesco-inscribed Paoay, Ilocos Norte, church (“Parish Church of St. Augustine”) is described in poetic terms: “The best time to appreciate the façade is about an hour before sunset. It turns golden! The details come into relief: the languorous coiled fern left of the entrance, the sun and moon flanking the image of San Agustin and above it the Spanish coat of arms, with remains of Chinese lions poised on either side.”

Here is the description of the interiors of the famous Betis church of Pampanga (“Parish Church of St. James the Apostle”): “The central retablo is a landmark in the art history of the country. It is joyously baroque with its gesticulating saints, twisted columns intertwined with garlands, angels playing instruments and rarely seen estipites (inverted obelisks).”

The Daraga church in Albay dedicated to Nuestra Señora de la Porteria and built by the Franciscans in the mid-1700s was made of andesitic-basalt rocks spewed by Mayon volcano. Its façade and the lower part of its tower are full of florid carvings. Inside is pure baroque splendor. “There is no other ensemble like Daraga in Bicol,” Jose writes. “The artists had a free hand interpreting the motifs, in light relief or simple incisions. The baroque columns recall twisted pastries. Flanges with volutes flank openings but also surmount others.”

All of these fine details are rendered beautifully by Quesada in his resplendent watercolor illustrations. Over all, “Simbahán” is a gorgeous visual feast and a fond celebration of heritage and faith. —CONTRIBUTED INQ