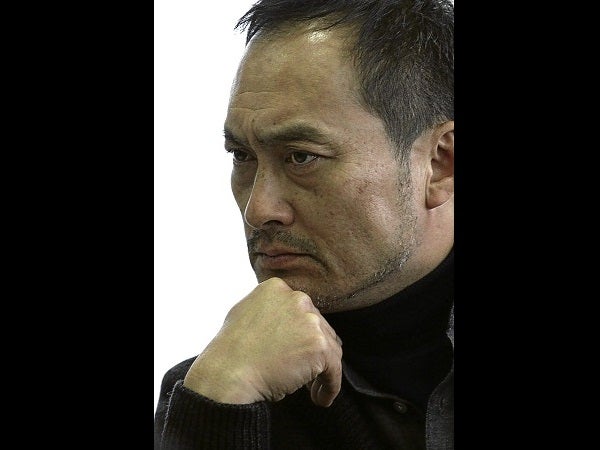 “We are not trying to restore the original situation before the devastation, but rather we [are trying] to look forward to the future,” said actor Japanese Ken Watanabe.

The 6-foot actor has been visiting Japan’s Tohoku region, the area affected most by magnitude 9 earthquake that shook Japan on March 11 last year.The 2011 Tohoku Earthquake triggered a 10-meter (32-feet) tsunami that swallowed cities, killed thousands, and left tons upon tons of debris.

Today, almost a year after the disaster Japan is determined to move forward. But it’s one, slow journey moving forward for this country. After the debris has been cleared, the cities still lie crumbled but the resilient spirit of the Japanese people is not.

Watanabe remembers meeting an 80-year-old fisherman from Miyako who survived the tsunami, a man that moved him to tears. Just before the actor left the city, the fisherman called out to him. He told Watanabe he should come visit him again after 10 years, when his newfound dreams would have become a reality. The man is 80 yet he still knows how to dream, and he is dreaming big.

“Last April I visited 22 evacuation camps (with 3,000 victims). Rather than just observing, I wanted to see the people myself. [I was] shaking hands with them, talking to them, giving them a pat on the back, crying with them. I know how they are struggling. I know the kind of life they are living,” Watanabe said in Japanese to a select group of international journalists in Kesennuma, Miyagi, Japan.

When he realized he needed a bigger audience to get his message of hope and support across, he decided to film a documentary. That’s when Discovery Channel Japan came into the picture.

The Hollywood actor, who looked dapper in dark gray coat and tailored pants, is often at a loss for English words and chooses to speak in Japanese instead. He said his near-brush with death more than 20 years ago, when he was diagnosed with acute myeloid leukemia, made him understand better what the survivors are going through.

“I could not completely understand the experience of the people affected by tsunami, but I could sit beside them and talk to them. I listened to the people, the subject matter we talked about were very deep. [In the future] this experience will be meaning and instrumental in my life,” he said.

He is so determined to help the survivors that he just flew in from Hollywood, he said, to inform his agent he needs to be present in Japan this year.

The Miyagi region, that cradles the cities of Sendai and Fukushima, is especially close to the actor’s heart. It is here, he said, that he started out as an actor and landed his first big role in a TV series.

“Miyagi is my second home. So many people here have helped me. I should do something. We make friends and connect to people. Like son taking care of his father we give support. By doing so my burden would not be so much,” he said.

The people from the northeast, he said, are gentle and strong. He has no doubts they will rebuild their lives, and their cities, in time.

“The people’s personal reason varies from one family to the other on what kind of life they want to live [post-tsunami]. Some people living here are already retired. People are getting older. That’s the dilemma on how to [rebuild]. Financial investments [could speed up recovery here]. I’d like to be a bridge between subsidy and the people,” Watanabe said.

Discovery Channel is now telecasting the six-part series “Rebuilding Japan.” From tradition to technology, the series is a message of hope and courage, of the human spirit rising above a tragedy that shocked the world.

Catch “Brewing Hope,” a story about an internationally reputable sake brand’s recovery from tsunami, premiering tonight at 9 p.m. with replay tomorrow at 2 p.m. On Sunday, March 11, 9 p.m., is the premiere of “The Seaweed Makers,” a story about Japan’s seaweed-growing communities’ determination to go on with their livelihood despite the odds (replay on March 12, 2 p.m.).

Other replays to catch are “Dreaming of Utopia,” “Photos from the Sea,” “Super Trains,” “Return of the K-Cars,” and “Beyond the Tsunami with Ken Watanabe.”