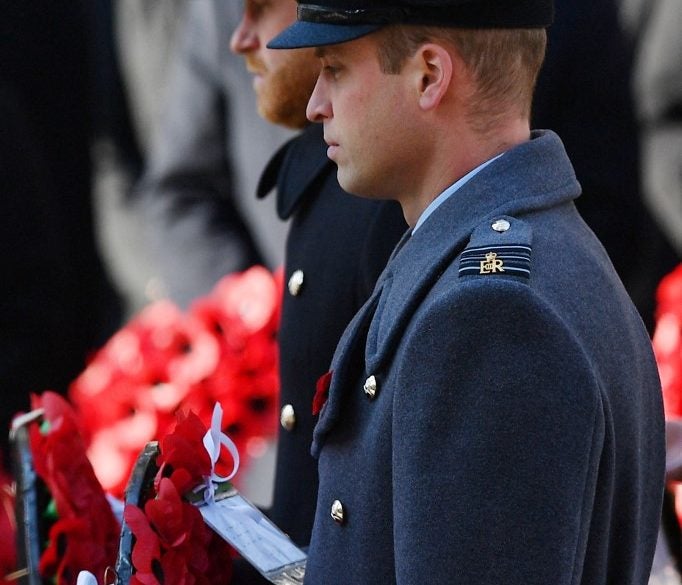 Britain's Prince Harry, Duke of Sussex, (L) and Britain's Prince William, Duke of Cambridge, (R) lay a wreath at the Cenotaph during the Remembrance Sunday ceremony at the Cenotaph on Whitehall in central London, on November 10, 2019. - Remembrance Sunday is an annual commemoration held on the closest Sunday to Armistice Day, November 11, the anniversary of the end of the First World War and services across Commonwealth countries remember servicemen and women who have fallen in the line of duty since WWI. (Photo by Daniel LEAL-OLIVAS / AFP)

LONDON — Princes William and Harry on Monday issued emotional tributes to their grandfather Prince Philip, whose death aged 99 has thrown the younger men together for the first time since an explosive row engulfed the family.

Harry, back in Britain for the first time since he and his wife Meghan quit royal duties and moved to North America, called Philip a “man of service, honor and great humor”.

“Grandpa, thank you for your service, your dedication to Granny, and for always being yourself,” the Duke of Sussex said, also calling his often outspoken grandfather a “master of the barbecue, legend of banter, and cheeky right ’til the end”.

Harry’s elder brother William, who stands next in line to Queen Elizabeth II’s throne after their father Prince Charles, said Philip’s life was “defined by service –- to his country and Commonwealth, to his wife and queen, and to our family”.

“I will miss my Grandpa, but I know he would want us to get on with the job,” he added.

The UK parliament in London returned a day early from its Easter break to pay respects to Philip, who spent 73 years at the side of Britain’s longest-reigning monarch, and started with a minute’s silence.

The devolved legislatures of Scotland, Wales and Northern Ireland also held special sessions, but political campaigning for UK-wide local elections next month was resuming after a pause to mark Philip’s passing.

Prime Minister Boris Johnson — no stranger to gaffes himself — repeated some of the famously abrasive Philip’s best-known faux pas, but insisted the late Duke of Edinburgh was simply trying to “break the ice” in otherwise stilted encounters.

Johnson said Philip had offered “unstinting support” for the queen, “touched the lives of millions” of youngsters through the Duke of Edinburgh Award scheme, and was a pioneering supporter of environmental causes.

Philip himself would have had little patience for all the eulogies, Johnson said, but “he made this country a better place, and for that he will be remembered with gratitude and fondness for generations to come”.

Prince Andrew said Sunday his 94-year-old mother was “incredibly stoic” but had been hit hard by the death of her husband, whom he described as “the grandfather of the nation”.

“She described it as having left a huge void in her life,” the couple’s second son said after a church service at Windsor Castle, west of London, where Philip died on Friday.

Andrew has been rarely seen in public since stepping back from royal duties in 2019 over his friendship with convicted sex offender Jeffrey Epstein.

Prince Charles on Saturday paid his own heartfelt tribute to his “dear Papa”, saying he and the royal family missed him “enormously”.

Philip’s death has been marked across the 54-nation Commonwealth, and nowhere more emotionally than the Pacific country of Vanuatu.

For decades, inhabitants of two villages in the hinterland of the lush volcanic island of Tanna have venerated Philip as a deity.

Yakel village chief Albi said it was unclear whether the religious movement would now turn to worshipping Charles, William or Harry.

“The spirit of Prince Philip has left his body, but it lives on — it is too soon to say where it will reside,” he told AFP.

Harry hurried back to the UK at the weekend and was undergoing coronavirus quarantine ahead of Saturday’s funeral.

Meghan is heavily pregnant with their second child and has remained in California, where the couple now reside after quitting royal duties and speaking out about their life in the family during an incendiary interview last month to US talk show host Oprah Winfrey.

Prince Philip’s death triggered eight days of official mourning, which ends the day after his funeral at St George’s Chapel in Windsor Castle.

Public elements of the ceremony have been eliminated to avoid crowds gathering during the coronavirus pandemic, while the congregation at the chapel is limited to just 30.

The prime minister opted against attending, to free up a place for a member of family.

The funeral service will be televised, and will be keenly watched for signs of strain — or reconciliation — between Harry, 36, and William, 38.

The Sun on Sunday newspaper said the pair would walk behind their grandfather’s coffin in a funeral procession in the castle grounds, as they did as young boys at their mother Diana’s funeral in 1997.