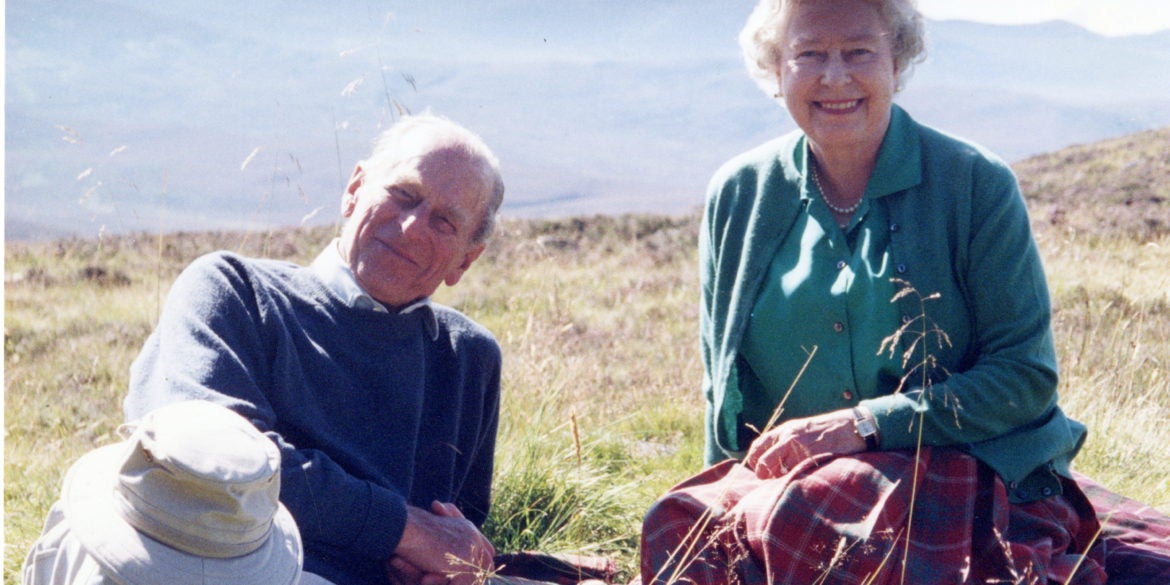 Handout image released by Buckingham Palace of a personal photograph of the Britain's Queen Elizabeth II and Prince Philip, the Duke of Edinburgh at the top of the Coyles of Muick, taken by The Countess of Wessex in 2003, obtained by Reuters on April 16, 2021. The Countess of Wessex via PA Wire/Handout via REUTERS

Queen Elizabeth and Britain to bid farewell to Prince Philip

WINDSOR, England — Queen Elizabeth will bid a final farewell to Prince Philip, her husband of more than seven decades, at a ceremonial funeral on Saturday, with the nation set to fall silent to mark the passing of a pivotal figure in the British monarchy.

While the ceremony will include some of the traditional grandeur of a significant royal event, there will be just 30 mourners inside St George’s Chapel at Windsor Castle for the funeral service because of COVID-19 restrictions.

There will be no public procession, all the congregation will wear masks, and the queen, who says the death has left a “huge void”, will sit alone.

“She’s the queen, she will behave with the extraordinary dignity and extraordinary courage that she always does. And at the same time, she is saying farewell to someone to who she was married for 73 years,” said Justin Welby, the Archbishop of Canterbury, who will help officiate at the service.

He said he expected the funeral to resonate with the millions of people around the world who have lost loved ones during the pandemic.

“I think there will be tears in many homes because other names will be on their minds, faces they’ve lost that they don’t see again, funerals they couldn’t go to as many haven’t been able to go to this one because it is limited to 30 in the congregation,” he said. “That will break many a heart.”

He called on the British public to pray for the monarch.

Philip, the Duke of Edinburgh, who had been by his wife’s side throughout her record-breaking 69-year reign, died peacefully at the age of 99 last week at the castle where the royal couple had been staying during a recent lockdown.

A decorated Royal Navy veteran of World War Two, his funeral, much of which was planned in meticulous detail by the prince himself, has a strong military feel, with personnel from across the armed forces playing prominent roles.

Army bands, Navy pipers and Royal Marine buglers will take part, while his coffin will be conveyed from its resting place inside the castle to the chapel on the back of a specially-converted Land Rover that he helped design himself.

At 1400 GMT, before the service starts, there will be a minute’s silence.

The congregation will be limited to members of the royal family and Philip’s family, with no place for political figures such as Prime Minister Boris Johnson, who will watch the event on television where it will be broadcast live.

The entire event will be held within the walls of Windsor Castle and the public have been asked not to congregate outside or at any other royal residences to show their respects.

With a reputation for a tough, no-nonsense attitude and a propensity for occasional gaffes, Philip was credited with helping his wife, who he married in 1947, modernise the monarchy in the changing post-war period, and to deal with the many crises that befell the institution.

Last month, the royals faced their greatest such tumult in decades when Prince Harry, grandson of Elizabeth and Philip, gave an explosive interview to Oprah Winfrey with his wife Meghan, who is not attending the funeral as she is heavily pregnant and was advised not to travel.

The couple, who moved to Los Angeles and quit royal duties last year, accused one unnamed royal of making a racist comment, and said Meghan’s pleas for help when she felt suicidal were ignored.

Much media attention will focus on the royals’ behaviour towards Harry, as it will be his first public appearance with his family since that interview.

He will walk apart from his brother Prince William in the procession behind Philip’s coffin, separated by their cousin Peter Phillips.

Mourners will eschew the tradition of wearing military uniforms, with newspapers saying that was to prevent embarrassment to Harry.

Despite serving two tours in Afghanistan during his army career, he would not be entitled to wear a uniform having been stripped of his honorary military titles.

“We’re not going to be drawn into those perceptions of drama, or anything like that,” a Buckingham Palace spokesman said. “This is a funeral. The arrangements have been agreed, and they represent her majesty’s wishes.”

The couple’s second son Prince Andrew has said his mother was being stoical in the face of a loss that she had described as “having left a huge void in her life”.

“It’s a great loss,” he said. “I think the way I would put it is, we’ve lost almost the grandfather of the nation.”