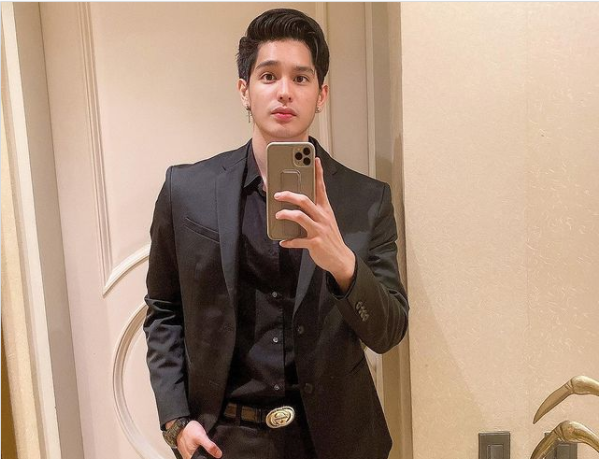 Gab Lagman is glad over the lock-in tapings for “Init Sa Magdamag” where he plays the love interest of Alexa Ilacad.

“Para sa akin mas madali ‘yung lock-in taping kasi nandoon ka for two to three weeks and just thinking about your character and how he is. And then pag-uwi pagpag and pagbalik ganoon uli,” Lagman said during the online conference for the series, April 15.

(For me, the lock-in taping is easier because you’re there for two to three weeks, and just thinking about your character and how he is. And then, when you get home, you unload, and when you return, it is the same again.)

Lagman credited his directors Ian Lorendos and Raymond Ocampo for being helpful all throughout the tapings. He enjoyed the family-like atmosphere which allowed him to focus more on his character.

He plays Kiko del Mundo, the guy who engages in a love-hate relationship with Hannah Salcedo, the character of Alexa Ilacad. This is his second teleserye and in his previous project, he was partnered with Jane de Leon.

“This one, it’s a little bit different because Alexa Ilacad had been in the industry for a long time and sobrang galing niyang umarte (she’s a very good actress). For being new in the industry, she always helps me and teaches me in our scenes,” he said.

He had a good first impression of Ilacad who approached him first while they were in a van. Being shy to approach strangers, he was relieved that Ilacad made the first move. He is also immensely appreciative of Ilacad’s kindness.

“If you could just see how she helped me and how she is in the set,” he said.

It cannot be helped to ask, therefore, what other traits he likes about Ilacad. Or what does he find sexy about her? But he really just looks at her as a kind person.

“How she is so sweet and genuine to anyone,” he said. “Even mga animals and cats ipaghahanda pa niya ng pagkain, ‘yung mga tira sa dinner namin.” (She even prepares food for animals, like cats, [she gives them] the leftovers from our dinner.)

“Init Sa Magdamag” had its pilot episode on April 17 on the iWantTFC app and website, and on WeTV iflix. It first aired on free TV yesterday, April 19, via TV5 and A2Z channels, and via digital TV box ABS-CBN TVplus. Digital TV box users can scan and look for A2Z channel in Metro Manila and in some parts of Cavite, Laguna, Quezon, Rizal, Bataan, Batangas, Bulacan and Pampanga. JB