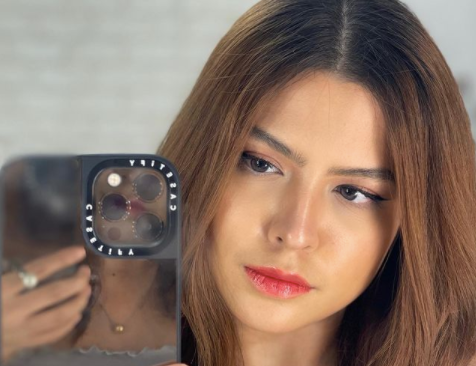 Alexa Ilacad is paired for the first time with Gab Lagman in the teleserye “Init Sa Magdamag,” and she finds their pairing “very K-drama-ish.”

Ilacad plays Hannah Salcedo, an independent, young woman and sister of Tupe (Gerald Anderson), while Lagman is Kiko del Mundo, a loving son to his father.

(Personally, that’s my take on it. They have a beautiful story because they were able to express their love. If you watch it, as you watch it, [you will see that it is a] very unconditional love.)

She explained that their part of the story is the “second layer,” showing the lighter and giddy side of romance, thus providing contrast to the main love story involving the leads Anderson, Yam Concepcion and JM de Guzman. She also compared this lightness to that of the Korean series “It’s Okay Not To Be Okay.”

Meanwhile, Ilacad sees Lagman as a guy willing to learn the ropes of acting.

“I really, really appreciate his willingness to learn, his openness to learn. It made things a lot easier. Working with Gab, it’s a fun experience. He’s very open,” she noted. “Tinatanggap niya ‘yung criticisms na binibigay sa kanya. (He accepts criticisms given to him.)

When asked what she finds sexy in Lagman, Ilacad said it is something between his ears.

“Para sa akin (for me) what makes Gab sexy is his mind. He’s a gentleman. Of course, obviously, he’s sexy. I like the way his mind works,” she said.

“Ang ganda niyang kakuwentuhan kasi (He is good to talk to because) he is very open, he’s attentive, he listens and may sense kausap (he has sense). You see that he cares when he speaks and when he listens,” she explained.

“Init Sa Magdamag” had its pilot episode on April 17 on the iWantTFC app and website, and on WeTV iflix. It debuted on free TV on April 19, via TV5 and A2Z channels, and via digital TV box ABS-CBN TVplus. Digital TV box users can scan and look for A2Z channel in Metro Manila and in some parts of Cavite, Laguna, Quezon, Rizal, Bataan, Batangas, Bulacan and Pampanga. JB