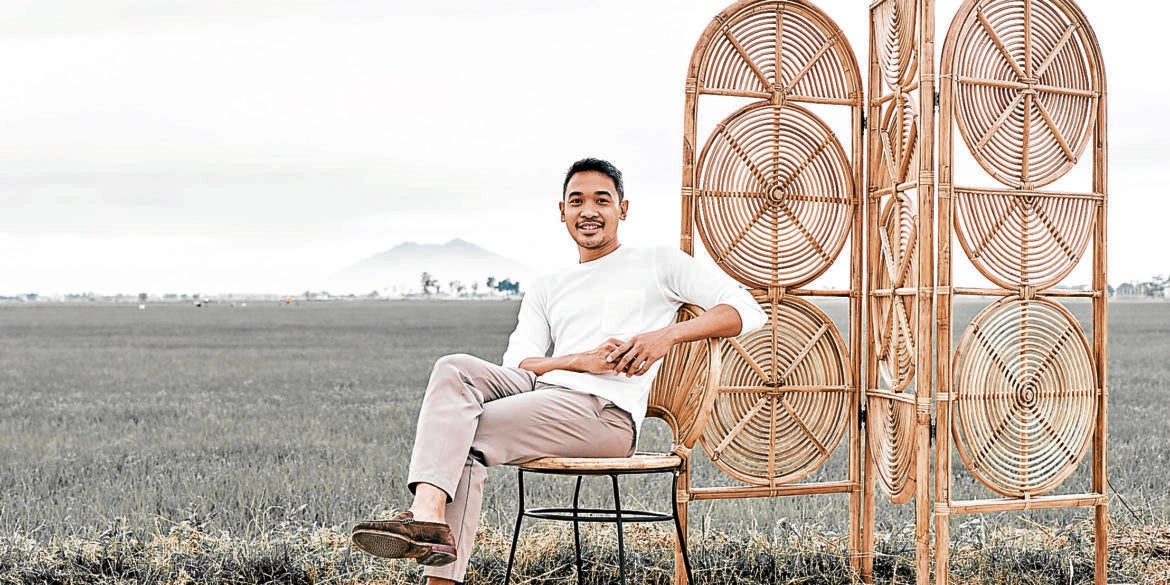 Jed Yabut and his Buwan divider

Missing out on a dream job in SG because of the pandemic, industrial designer Jed Yabut comes home to start his furniture line

The pieces from Jed Yabut’s line of furniture range from the structured, like his open bookcase and side tables, to the fluid, like his organic-looking pendant lamps and nest-inspired standing lamps. Made of rattan in all its textured glory backed by a combination of wood and metal, the pieces look familiar and yet can be styled in a contemporary way.

The industrial designer put up his own furniture line at the height of the pandemic last year. It wasn’t originally part of his plan to return to the Philippines as he was about to “snatch” a new job in Singapore before everything went up in smoke.

“It was a dream job I had always wanted but when countries started to close their borders, including Singapore, I was left with no other choice but to go back to Manila,” Yabut told Lifestyle in an email interview.

With no job and no rosy prospects as the country went into lockdown along with the rest of the globe, he considered that maybe it was the best time to start his own business venture.

“I had been wanting to do this for a long time now, which is also the reason I took up my MBA degree. I chose furniture because I thought it was easy to start it solo. I simply had to design and then look for artisans to help me build it all up.”

During two weeks of self-isolation in the province, he sketched and created 3D models. Things came together as he envisioned them even as he admitted that he had been away from the country for too long and that his network was limited to his former classmates in University of the Philippines Architecture.

“I searched within and outside Metro Manila for suppliers during the height of the pandemic. Looking back, I am thankful that I have remained healthy despite the nonstop search for suppliers and collaborators,” Yabut said.

Even with restrictions brought about by the pandemic, he was able to come up with a 22-piece collection whose primary material is rattan that he says in an Instagram post is “light, strong, flexible and durable.”

“Once damaged, it’s easily repaired. But what ultimately drew me to rattan furniture is its distinct tropical and rustic charm. I reimagined modern Filipino rattan furniture, bringing something new and provocative to local and international markets.”

The results are indeed fresh and charming. Chairs have seat backs that call to mind hand fans (Abaniko), palm fronds (Anahaw) or the flow of a waterfall (Talon) while several no-nonsense tabletops get a fresh update with legs that reimagine the festive arches of the Maytime Santacruzan (Arko), a traditional dance (Tinikling) and even the lowly coconut husk used to scrub wood floors (Bunot).

Yabut’s decision to work mainly with rattan was one consciously made.

“Choosing rattan as my primary material also helps keep local economies afloat,” he said in an Instagram post. “Because rattan grows abundantly in tropical forests, it has contributed to employment and income generation of Filipinos living near the forests, and of craftsmen, dedicating their lives to honing their skills in sculpting rattan furniture.”

Working with these craftsmen from Bicol and Panay, however, has not always been smooth sailing. Yabut has had to deal with complaints that his designs are difficult to execute.

“I have worked with contractors, suppliers and site workers in my almost decade of experience abroad, and have had my fair share of complaints as the architect or the designer.” He said one needs to be patient and to try and understand where they are coming from.

“I have to make them feel that I am not there to undermine their talent and skill but to collaborate with them to bring out the best of the project,” he said.

Of his initial collection, his three favorite pieces are the Kagubatan etagere/bookshelf that takes three people working on it simultaneously to complete it; the Buwan divider with stylized phases of the moon that underwent the most number of design revisions; and the Bunot pair of side tables, which he describes as “probably the most charming and cutest” in the collection.

“When kamagong is used as the tabletop material, it becomes an artwork,” he said.

Yabut’s collection can be viewed by anyone online (bit.ly/jedcatalog) but he is not too worried that others might try to copy his designs.

“The danger of copying is always present but I take that as part of the adventure. I try to make my pieces memorable and remarkable enough so that when people see them, they know that it is a Jed Yabut design. If someone copies, then that’s fine. At least people would recognize it as my design—well, at least I hope.”

Yabut is in it for the long haul. If the current situation improves, he will still stay put and in fact, is preparing to open a showroom in Poblacion, Makati, by May.

“I will stay in the country. What is important at this point is domestic brand recognition, and a steady scaling up,” he said. INQ

Project Rebound is an advocacy campaign that seeks to help Filipinos overcome the crisis through relevant and timely information they can use to make informed decisions. It is supported by Medicard Philippines, Metro Pacific Tollways Corp. and Pilipinas Shell Petroleum Corp.