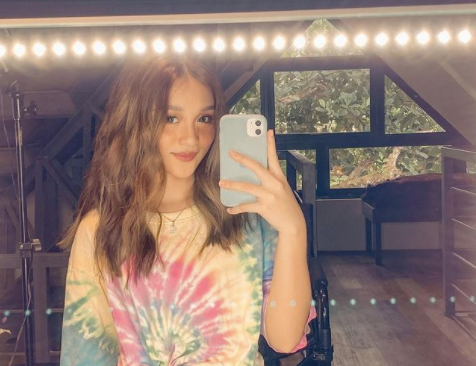 Angela Ken did not foresee that her song, “Ako Naman Muna,” which she recorded on Tiktok, will be her passport to a showbiz career. Because of it, the young singer has been offered to join the group Squad Plus along with KD Estrada, Sam Cruz and Anji Salvacion. Of course, Ken accepted.

“Ako Naman Muna” has gone viral on TikTok with over 1.3 million likes as of writing.

(It was sort of unexpected. It warms my heart that they trusted me and gave me this opportunity to show my talent, my true personality before a lot of people.)

(Maybe, what I would remember the most is, when “Ako Na Lang Muna” was just in scratch, a lot of people were saying, “This girl will go far.”)

That boosted Ken’s confidence and her self-trust, especially as the song has been inspiring OFWs. The song speaks of their pain while working abroad. For Ken, the song recognizes the many sacrifices of OFWs and hopes to give them comfort.

(Yes, you’re tired but you’re not alone. I see that a lot of OFWs miss their families in the Philippines. They’re sad because they feel that they are alone there. Let’s admit that physically, they’re alone there, but right in the heart of every Filipino is family.)

Ken also wrote the song to help spread hope amid the already-troubled times due to the pandemic.

(Why should I add to the problems of the world when I can instead find a way to give hope to people?) JB

Anji Salvacion credits her Squad Plus break to timing and prayers