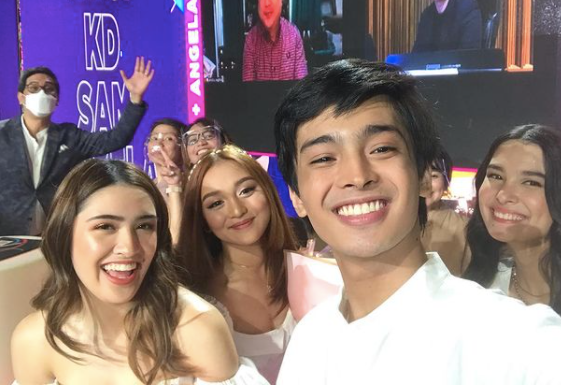 KD Estrada (3rd from L) with his Squad Plus mates Sam, Angela and Anji. Image: Instagram/@kdestrada_

KD Estrada wants to pattern his career after James Reid’s

Young singer KD Estrada idolizes James Reid so much that he wants to pursue a similar career in music like him. He particularly admires Reid’s creative freedom.

“He does RnB, stuff I [really] like. So, I really like to pursue that,” Estrada said during an online press conference on April 19 which launched Squad Plus, composed of Estrada, Anji Salvacion, Angela Ken and Sam Cruz.

Being a newbie in the business, Estrada is both “happy and nervous.”

“That’s the main thing. I felt nervous because I was gonna be with artists that I only see on television or mall shows. And now I will be with them, like regularly. It pushes me to [really] improve myself,” he explained.

During the online press conference, reporters noticed that he had some guitars behind him, and he indulged them by talking a bit more about his guitar-playing.

As a hobby, Estrada plays guitar. In his background during the online conference were some guitars.

“I guess judging by the background, ito talaga ang (this is really my) hobby ko, eh, just playing instruments. This is what I really love to do. It won’t feel like a chore because if you really like to do it, it will just feel fun. But besides that, I love mobile games,” he said.

Estrada meanwhile knows that the business entails “hard work and discipline,” so he knows the importance of good habits such as being on time and professional. He also plans to work and attend school at the same time, which he said makes him “plan ahead of time and schedule [his] work.”

Estrada’s dream performance is a solo number in “ASAP Natin ‘To” but he feels that it would not come any time soon, saying, “I still have to work on my voice a bit.”

As a budding actor, Estrada wishes to have more acting projects, just as he cherishes his stint in the miniseries “Unloving U.”

“I really enjoyed it. I learned so much in such a few days,” he said.

As a Star Music artist, he has released self-written songs such as “Sa Puso Mo,” “One of Many” and “Saves It” which is also featured in “Unloving U.” While waiting for the opportunity to record a full-length album, Estrada connects with his fans through his YouTube channel and Tiktok account, where he uploads covers of his favorite songs. JB

Despite breakup, 4th anniversary of ‘JaDine in Love’ concert celebrated by fans