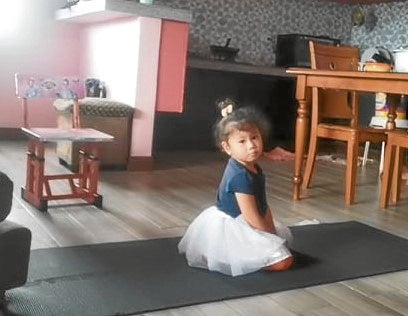 A ‘Sesame Street’ or ‘Batibot’ for dance

Two ballet classes on the same day sounds over the top, but that’s what my child had during the weekend.

The first one was her regular class, while the other was the Baby Ballet Open House of Lisa Macuja School of Ballet. The only reason my 4-year-old agreed to the second lesson was the promise that her younger cousin would be joining the class, too. The trial class allowed participants 3-7 years old.

Ballet Manila’s principal dancer Abigail Oliveiro taught the class with the assistance of her “Swan Lake” partner Mark Sumaylo. It was a full hour of lessons on movements through storytelling.

To do the cobra pose, for example, students were told that they were going to go to Egypt. They had to ride a plane so they had to extend their arms and feet while an adult held both their hands to sway them from left to right, thereby stretching and strengthening the lower back.

When they landed, they were told that they were going to see the Great Pyramid. Thus, they were asked to fold their knees and extend their spine and neck so that their toes reach their heads.

Oliveiro is an animated teacher. Her facial expressions and the tone of her voice make the session fun and exciting for children. She demonstrates some of the moves, but the demos are mostly done by Sumaylo. Their chemistry in dancing translates to teaching, in the way he moves to show reaction to her stories. It’s a very engaging session for both the children and the adults who observe them.

The open house touched on multiple movements to give a preview of what to expect from a full lesson. Oliveiro said that the group will be separated into two regular classes according to their age group. They have a maximum of 20 students per class or the allowable gallery view for Zoom to allow them to see the students at all times.

One of the common misconceptions parents have is that their child will do lots of twirls in the classes. They won’t do much of that in the beginning.

I discovered that ballet is very big on building foundations. Thus, the kids will be taught how to stretch and strengthen their bodies first. These lessons serve as basic movements for the dance that they might do later on.

Ballet at home requires a small space to move around and clean mats to do floor exercises on. Barre is sometimes used but it can be easily substituted with chairs.

For beginners, there is a level of readiness required on the child’s part. The child has to be able to follow instructions. It can be boring and challenging for younger dancers. If they’re not ready, don’t enroll them, or else you’ll just be paying to watch your kid throw tantrums.

Just wait it out for a few months before trying again. In the meantime, make your child watch ballet shows and dance movies to motivate them.

My child has been dancing ballet for two years. She started when she was 2 and she is at level three at Dance Factory PH in Cavite. I will not pull her out of her regular classes. Besides, my child has said multiple times that she loves her teachers and lessons in her current school.

But there is a big chance that I might enroll her in Macuja’s school because it’s a good supplement for her current level. Storytelling as a teaching method is something that will help her remember the basics.

The prima ballerina is a factor for enrolling, too. To be taught by Macuja or her students is something that I believe my child will benefit from.

What could probably turn me off is the number of students. Having 20 students in an online class sounds a lot. But Oliveiro and Sumaylo made sure to call all the students’ names during class. They also had assistant teachers who were not on the microphone but observed the students as well.

But the class is truly enjoyable and entertaining. It made me think of “Sesame Street” and “Batibot” for dance.

Another advantage of enrolling in a class over learning from YouTube is that a class follows a curriculum. Also, the fact that someone observes your child and can give feedback on what he/she does wrong will improve his or her technique and lessen the possibility of injuries.

But if you’re still hesitating, wait for announcements for another open house. You can gauge the interest and readiness of your child with a trial session. INQ