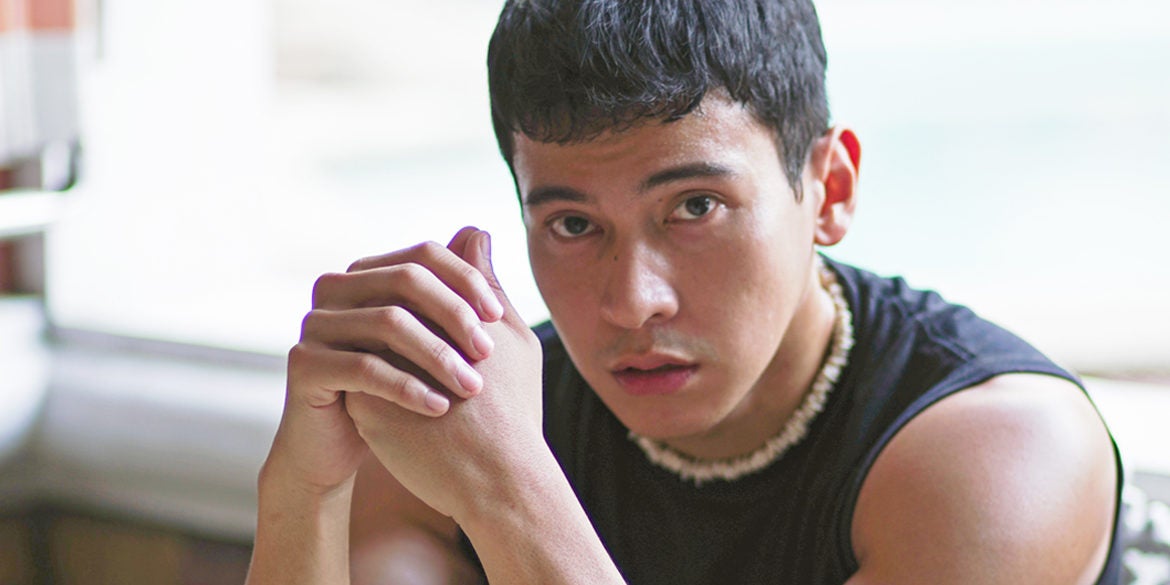 EXCLUSIVE: Fifteen years after his showbiz debut, Enchong Dee is still swimming along

This is a plot to a movie. The nerdy, awkward freshman gets to talk to the swim team hero. In 2009, Enchong Dee was the campus crush we would sneak a look at when in the halls of De La Salle University. We shared clips of his role as the archer in the UAAP opening ceremonies, and we retweeted furiously when he’d bring home another award.

Many things haven’t changed since then, including the excitement I felt the day before the Zoom call with Enchong. The years also haven’t touched Enchong that much. Somehow, he’s always managed to capture the novelty of the time. He’s pulled off award-winning performances. He surprises us every season with a new project, and that’s not even the best trick of them all. Enchong eludes what many artists succumb to: being a relic of their trend.

Instead, Enchong goes with the flow. He’s where the waves will take him, always keeping his head above water.

You know what’s crazy? This year marks almost 15 years since you started in showbiz.
Yes, I’m very thankful. It’s been 15 years, and I still wouldn’t believe it because I think that I’m starting and there are so many things to do. I’m very grateful that maybe one way or another, I did something pretty good to be able to stay here for that long.

What have you learned in 15 years, from star athlete to entertainment star?
I think every year my learnings change. This year, my greatest learning is that if I mind my own business, I will focus and attend to what I need to finish.

On being a vlogger

What is the goal now as an actor? You mentioned in one of your vlogs; you wanted to be a performer.
I’m looking forward to more international exposure. I think there is stuff lined up, but as much as possible, I don’t want to be that person that expects so much from plans. I’m excited when it’s actually there.

I’m just happy to share the conversations I have with my friends in terms of content creation. I rarely call it an interview. It’s usually more of a conversation, and what else can we share with the public in terms of finance, handling uncertainties, especially at this very moment.

You started vlogging a year ago. It’s evolved since.
I think there’s something in me that says I don’t want to stay at home and not gain something from all these experiences. The hardest part for me was how I could separate being a celebrity and vlogging because that’s a totally different discipline.

I researched and studied and looked over what passions I have. Financial literacy is something that I’m very open, pleased to share with people. Especially now, with the unemployment rate and the uncertainties that we’re facing, let’s teach people how they can earn extra from doing something they love. I’m happy that I was able to find that kind of branding.

Fitness, and then some

What was your favorite meal in college? Do you remember?
The one from the same building where you buy the school merchandise. There’s a canteen there that serves you rice, breaded pork, and gravy, all for just 50 pesos.

You were already a budgetarian way back then, I see.
I think it’s more of the influence of my teammates. I really became close to them. I ate where they did and always hung out with them.

Being part of the swimming team is why you’re also a fitness star. Tell us about your workout philosophy.
I realized that adaptability is something that we should really improve because I hated doing home workouts before the pandemic. You get lazy because everything is here at home. But you know what, last year, I told myself: I will not allow 24 hours to go by without even sweating it out for just an hour. Kasi ‘di ba, mahiya ka naman sa Diyos, binigyan ka ng 24 hours, igalaw mo naman ‘yong katawan mo! (It’s embarrassing, God gave you 24 hours and all, so you should move your body!)

What’s your diet like? What’s your advice for people struggling with their diet?
I rarely call it a diet. But for me, my motto with fitness is really moving more than what I eat. It’s as simple as that. I think the problem with a lot of people, they’re focused on aesthetics.

It’s always for the ‘gram.
For me, it’s never about that. It’s really more on my health. It’s really your mindset.

What are your favorite cheat meals?
I have my seasons. Right now, my brother is into ice cream, so we’re buying ice cream. But I would have my salty junk food season, and then during December, I allow myself to have a cheat month. It’s the last two weeks of December and the first two weeks of January. That’s my vacation season. I don’t work out; I allow myself to eat whatever I want to eat, as much as I want. And then I go back to my regular programming afterward.

If people look at Enchong as a fitspiration, who does Enchong look up to as a fitspiration?
I think Michael Phelps would still be that person. He never let go of being that swimming icon that we all look up to. Even when he has a family and now is retired, he maintained the branding of Michael Phelps, which is good, and the discipline he learned from swimming, I don’t think he will ever let go of it.

What do you say to people who believe celebrities shouldn’t express their opinions on social issues?
It would be very, very comfortable if we stay in our area of expertise. But do we allow it to go on in our lives simply because we’re comfortable with our situation? There’s a part of me that can’t stay quiet when I see injustice around me.

We all love saying, “Let’s just help each other out,” but it’s not as simple as that. We can see and feel all the injustice around us. When the people we expect to work on that injustice are not doing their job, who do we depend on afterward? We depend on the people who have enough influence, power, and connections.

Every day, I would pray for our situation to be better, for our country to be better. The Filipino people deserve it. We are hardworking and smart. We are a creative nation, and we go over and beyond our duties and responsibilities.

I wish that we have enough opportunities for all the Filipino people. That’s all I want.

What’s one hidden talent you have yet to reveal to the world?
I think it’s not something that’s yet to be revealed, but I’m a very good conversationalist. It’s something I’m very passionate about. Now I’m exploring, learning, and studying public speaking.

I look up people who are so good at public speaking. How I wish I can be a motivational speaker in the future. In La Salle, I remember attending a motivational talk by Francis Kong. And I love it so much! It made a huge impact on my life until now.

What has been your best project so far?
That’s so hard! I’ll choose Elise. Simply because I wasn’t expecting that movie to turn out that way. All of a sudden, we are getting rave reviews from that film.

Who’s the first person you call or text when you wake up?
I wish I did call or text, but I’m more of a social media person. I’m guilty I’m that type of person, that the moment I wake up, I check on Instagram.

Actor you admire in the industry?
This one changes also, but right now, I’m in the phase of Jericho Rosales. I look up to him.

One thing that keeps you sane in this whole situation?
Work, definitely.

One thing you would save in your house in the event of a fire?
My phone!

Where will you be 10 years from now?
I’ll be, most likely, in Europe, by the beach, and just checking out social media while sipping on my cold brew. [Laughs]

If you could live in one music video, what would that be?
Definitely “Chinito” by Yeng Constantino. I’m grateful for it. I think it opened a lot of opportunities for me.

As of writing, Enchong is now on a taping lockdown for Huwag Kang Mangamba. Catch it on The Kapamilya Channel. Follow Enchong on YouTube and Instagram.