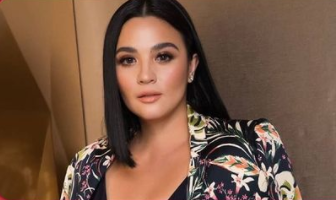 After already accomplishing two lock-in tapings, actress Sunshine Dizon has come to realize that she enjoys the new experience of a lock-in set up more, because it allows her to concentrate.

(To be honest, I enjoy it more and I like it more, the idea of a bubble. Everything is already there, you don’t have to think of anything else, because the project, that is the only thing you will think of, and you will also get to already finish it.)

She does know that she may sound weird to some for preferring the lock-in set-up, but the way she sees it, it allows her to just focus on her character fully, then be over and done with it and no longer be confused, after the tapings wrap up.

For her maiden project, Dizon will work with Paulo Avelino, Janine Gutierrez and Jake Ejercito in the light family drama “Marry Me, Marry You.”

As the newly-launched Kapamilya star, Dizon stated that she’s happy to be given the opportunity to work with her idol director Dwein Ruedas Baltazar, whose work on “Excess Baggage” starring Angelica Panganiban and Carlo Aquino she adores. She shared that she was really excited upon learning from her manager that Baltazar will be her director.

Apart from that, working in a new environment with her fellow Kapamilya actors also excite her.

(Maybe, as to my career, it’s like coming full circle for me to finally experience working with actors I only used to watch, and now I will finally be with them.)

Among those that Dizon looks forward to working with is Piolo Pascual. She also spoke about other Kapamilya stars she admires.

(During the time when John Lloyd Cruz was still active, I wanted to do scenes with him because his eyes are very good. I also enjoy Angelica Panganiban and Ketchup Eusebio. I got to know them through our organization, AKTOR.)

Dizon was a Kapuso actress for 25 years until her transfer to the Kapamilya network last April 30. She has appeared in “Encantadia,” “Ika-6 na Utos,” “Anna Karenina,” “Bakekang,” “Ikaw Lang Ang Mamahalin” and “Kung Mawawala Ka.” JB

Sunshine Dizon on transferring to ABS-CBN: ‘New season in my life, career’

Sunshine Dizon officially transfers to ABS-CBN, to star in ‘Marry Me, Marry You’