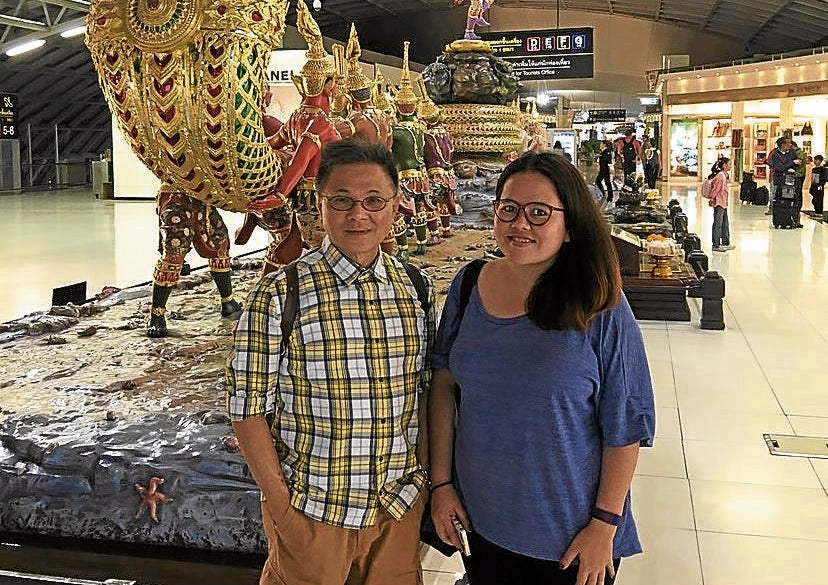 The author with Ricky Lo at the Bangkok airport in 2016

Remembering Ricky Lo, my only ‘tito’ in journalism

When I think of him, I don’t think of show biz or Hollywood. I think of his kindness and how lucky I was for the gift of knowing him

On my first trip to London, the first person who texted me after the plane landed was Ricky Lo. “Where are you? Are you here already?” he asked. He had traveled on an earlier flight.

I kept him posted as I took the tube from Heathrow and as I navigated the streets while dragging my suitcase. “Ingat ka,” he messaged.

When he found out I was already at the hotel, he texted again, asking for my room number. Within minutes, he was at my door. “I brought you bread,” he said. “Baka gutom ka.”

Here was this veteran journalist—no, a legend—standing in front of me with a bag of bread because he was worried I might be hungry. Then he handed me a Hop-On Hop-Off bus ticket so I could see the sights.

But that was Tito Ricky. He was thoughtful, generous, kind.

Years before that, in Tokyo, our first trip together, we had different schedules. We were both going to the press con in the afternoon, but he was going to the movie screening in the morning while I would be covering the red carpet event at night.

While he was at the screening, I was in my hotel room writing, thinking I still had three hours before the press con. Then he texted, “Where are you? On our way to the press con.”

I called him, confused and panicked by the change in the schedule. He assured me that I had time—they were still on their way back from the screening and the press con was just next door to the hotel. I showered quickly and was scrambling to get ready when I received another text message from him. “Where are you? Press con about to start.”

I made it, thanks to him. I work for Inquirer and he for The Philippine Star, where he had been entertainment editor since 1986. I was technically his competition. He didn’t have to check on me. It certainly wasn’t his job to make sure I didn’t miss an important event, but that’s the kind of person he was.

It was on these work trips—a number of which had only two of us traveling from the Philippines—that we bonded and that he became Tito Ricky to me. I’m not the kind of person who just starts calling people tito or tita unless they were related to me—in fact, I think he’s my only tito in the world of journalism. Everyone else is “sir.” But with him, it just felt natural. Maybe because he makes people feel like they’re family.

We would eat together, sometimes wrestling with menus with no English translation, and he would insist on footing the bill. I would try to fight him for it—I’m usually good at the bill battle—but it’s so hard to win against him.

In a city I can’t remember, he made me go with him to a convenience store so he could buy me snacks. But I didn’t want anything, I told him. He insisted, saying I might get hungry in my room later on. “Sige na, pili ka lang,” he said, telling me that we wouldn’t leave the store unless I chose something.

Another time, when we landed in Manila and he found out I was taking a taxi from the airport, he insisted on taking me home. He was so good at taking care of people. He was also fiercely protective of his staff, contributors and even fellow journalists, and that was lovely to see.

He may have made a career out of interviewing stars, but Tito Ricky had plenty of fans himself. Filipinos would often stop us in foreign cities, wanting to say hi to him or have a photo taken with him while gleefully telling him that they watch him on TV or they read his column. He was always nice to them. He was always nice to everyone.

Tito Ricky had a certain charm that made him unforgettable, even to Hollywood stars who come face to face with countless journalists from all over the world. I’ll always remember that moment in a hotel when Dwayne Johnson greeted him like an old friend. “Hey, Ricky,” said The Rock, flashing his insanely white smile.

When I was diagnosed with clinical depression, Tito Ricky reached out, punctuating his message with a lot of emojis: clapping hands, bouquets of flowers, glasses of wine and thumbs-up signs. “Cheer up, my dear. There’s more to life than Big D!!!”

I was with him on my first work trip after my diagnosis. It felt like I was still finding my footing again, but having him there was a comfort. One night, we took a walk at the floating market in Amphawa in Thailand. We stopped to buy postcards, sat down to write on them and mailed them on the spot.

On our last trip together to Los Angeles, in 2019, I was chided by the strict timer guy for asking another question after he gave me the signal to wrap up my interview. He wagged his finger and told me, “Don’t end up on my naughty list.” Then he pointed to Tito Ricky. “He’s already on it.” And Tito Ricky laughed and laughed.

I remember laughing so much with Tito Ricky—in hotel rooms, restaurants, buses and planes.

I always lit up whenever I found out I’d be traveling with him or whenever I’d see him at local events. It was always a good time when he was around. He wasn’t just kind; he was funny and he always had the best stories (and he’d tell them with that signature twinkle in his eye).

He lived such a full life—and not just because he’s interviewed the world’s biggest stars. He has clearly touched so many lives and he is loved by so many. The outpouring of grief after the news about his death spread is proof of that. The world lost a truly great man on May 4.

Over the past days, I’ve read so many stories and posts about Tito Ricky, and it struck me just how consistently kind he was to so many people. That’s who he’ll always be to me. When I think of him, I don’t think of Pinoy show biz or Hollywood even though he conquered both those worlds. I think of his kindness and how lucky I was for the gift of knowing him.

I hate that he has left us so soon, and my heart is more than a little broken.

Thank you, Tito Ricky. You were wonderful. And I still feel your warmth.