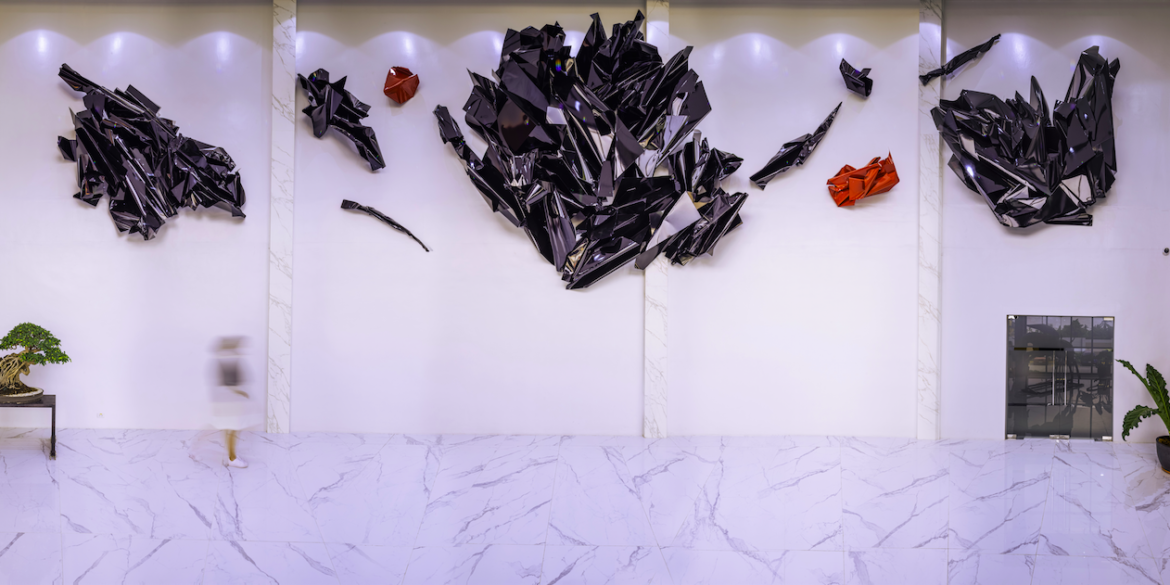 Visual artist Jinggoy Buensuceso has delivered yet another stunning and colossal masterpiece. Titled Okurimono or The Gift in Japanese, this multi-piece sculpture is the most massive origami art that Jinggoy has ever crafted, comprised of crumpled aluminum sheets in either glossy black or red attached overhead on a spotless white wall. Take a closer look and you’ll see not only the artist’s genius techniques but also his mastery over the chosen medium, carefully guiding each jagged line and curve to a certain angle, a certain shape.

The result is nothing less than what we expect from a Jinggoy piece—dramatic, thought-provoking and always with a greater story to tell.

Installed at one of BEVI Group’s manufacturing plants in Alaminos, Laguna, Okurimono is a commissioned artwork in celebration of the 15th anniversary of Kojie.san. Conceptualized, developed, and completed all within a pandemic year, Okurimono is Jinggoy’s poignant interpretation of the beauty brand’s beginnings from offering a single soap and its 15-year journey of turning that bright orange bar into a part of Filipinos’ daily skincare routine and growing that small business into an icon and a key player in the beauty industry.

Kojie.san started in 2006 as a pioneer of a soap with kojic acid, which is commonly prescribed by dermatologists for its efficacy in treating skin pigmentation, sun damage, scars, and age spots and evening out the complexion. First discovered in Japan in 1907, kojic acid blocks the formation of tyrosine, an amino acid needed in producing melanin that’s responsible for skin pigmentation.

The brand was formed at a time when the market was already saturated with over 40 lightening brands vying to be the best in the category. But Kojie.san was undaunted, challenging the norms then and faced the competition head on.

Through the dedication of its founder and CEO Jazz Burila and Kojie.san’s instant connection with the consumers rooted in the soap’s highly effective formulation, the brand survived and thrived—eventually reaching 15 years of growth and success. 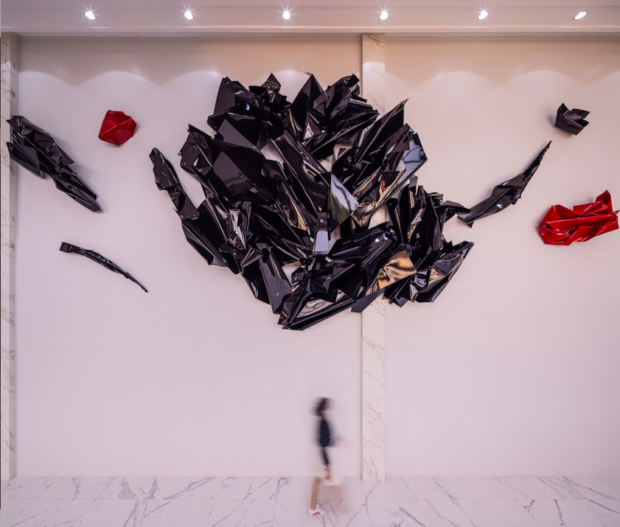 This is the very story that prompted Jinggoy to create Okurimono, the crumpled aluminum sheets depicting creased origami papers—a bit rough and unexpected yet still so captivating. Through this work, the artist eloquently captured Kojie.san’s boldness and tenacity in carving a path of its own, to define its value and create its destiny. No matter how others see it, Kojie.san is not letting anyone else decide its fate.

In many ways, Okurimono is not only a reflection of Kojie.san’s journey to success, but also the brand’s ethos, its philosophy on beauty and what it stands for. As a key player in the beauty industry, Kojie.san understands its influence on its loyal league of followers.

That’s why it made it a point to proudly wear the brand spirit on its sleeve. In 2019, Kojie.san officially launched Command Beauty in a bid to encourage women to create their own definition of beauty instead of letting society set the standards for them.

“Art speaks to your inner self, you define it based on your own understanding, inhibitions and experiences. There’s no single way of appreciating an art piece, in the same way that Kojie.san believes that there is no single way to be beautiful. In fact, you should create your own definition,” says Jazz. “This is why I feel Jinggoy’s work is the best representation of Kojie.san.”

For many years, women have been told what it means to be beautiful. And if we follow the standards set by society, beautiful would only pertain to a certain group or look. But those days are over. Today, beauty means many things. Beauty means diversity. From a rigid and exclusive concept defined by a few, beauty has become malleable and democratic. It can mean what you want it to mean. You can define it based on your own understanding, inhibitions and experiences—just like art. 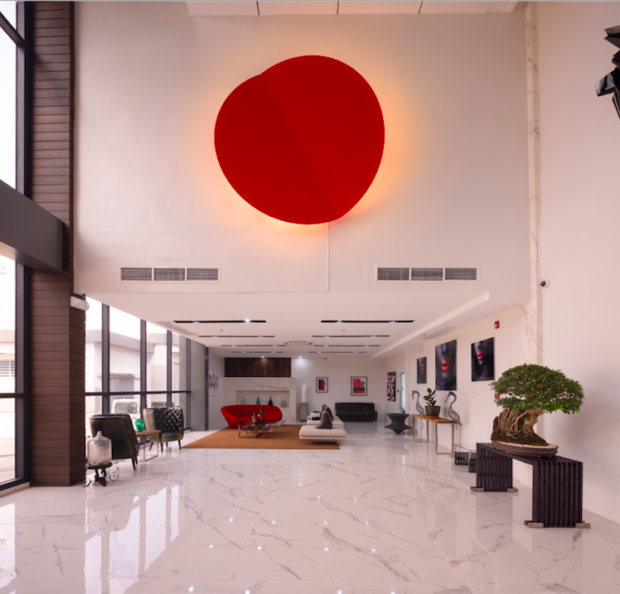 As part of the larger work, Okurimono is joined by Red Moon, which hangs adjacent to it, as if they are in conversation with each other. Unlike the angular black and red pieces of the former, Red Moon is basically a smooth red circle that’s subtly folded in the middle at a particular angle. The artist says this piece represents the power of a woman.

Juxtaposed with Okurimono and what it stands for, we can say the Red Moon sculpture represents the Kojie.san woman, a woman who has taken the reins and defined her own worth. The same way Kojie.san, the brand, did 15 years ago. It’s the same philosophy that will guide the brand as it continues to challenge the norms, democratize the meaning of beauty, and provide consumers with new tools that’ll help them present themselves to world in the way they want to.

Reimagine, redesign and rediscover your kitchen Sub-Zero and Wolf introduce one of a kind, 360° virtual showroom