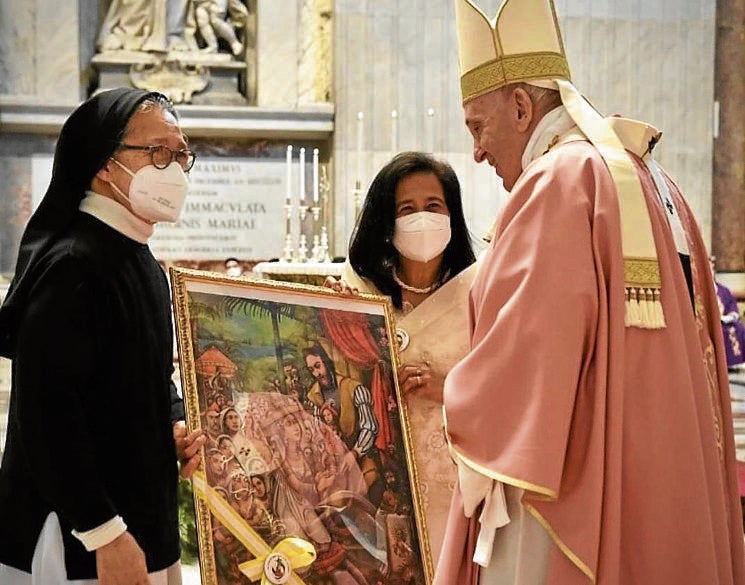 Symbolic copy given to Pope Francis in March —@FRANCISCUS’ TWITTER

On March 14, Pope Francis presided over a Mass at the Vatican for the quincentennial of the introduction of Christianity in the Philippines, where he hailed the Filipinos and prodded what he describes as the “smugglers of faith” to continue evangelizing the world.

“On this very important anniversary for God’s holy people in the Philippines, I also want to urge you to persevere in the work of evangelization not proselytism, which is something else,” said the Pope in his homily.

“The Christian proclamation that you have received needs constantly to be brought to others as the Church is called not to judge but to welcome, not to make demands but to sow seeds, not to condemn but to bring Christ who is our salvation.”

At the same historic event, a gift from the Filipinos was given to the pontiff, a painting titled “The Seed of the Filipino Gift of Faith and Mission” by Ryan Carreon.

The completed work, depicting the baptism of Cebu’s Queen Juana together with hundreds of natives on April 14, 1521, was sent to the Vatican.

“The Seed” did not win the competition but caught the eye of San Agustin Museum director Fr. Ricky Villar, who contacted Carreon and helped facilitate its purchase with the intention of giving it to the pontiff on behalf of the Filipino people.

Villar said what attracted his attention is that, despite losing the competition, Carreon’s work is the best researched and has the correct elements among the entries.

“Despite of the difficulties in life and no matter what the situation is, gratitude is part of our culture as Filipinos,” Villar told Lifetsyle.

“The reason why we are giving this to Pope Francis is our gratitude to him, for he always includes us Filipinos in his prayers,” he added.

The painting, bought by art collector Raymond Naval from Carreon shows Ferdinand Magellan gifting a kneeling Queen Juana the iconic Sto. Niño in Flemish garb, one of three religious images featured, which also include the Ecce Hommo, and Madonna and the Child.

Carreon’s painting, based on Antonio Pigafeta’s account of the Magellan-Elcano expedition, depicts the queen “in all glittering array” complete with personal ornaments, such as garruda earrings, snail necklace and an armband, all made of gold.

A basin of rosewater musk is seen under the altar table. This was used by Magellan in the baptism of the queen and her people.

These include the pusô, or tamu (rice cooked in woven palm fronds), lagang (decorative object made out of nautilus shell), palaspas (palm fronds shaped into a cross) and the kris, a kind of sword.

“These folk elements are extant in precolonial Philippines and continue to be part of Cebuano heritage until today,” notes San Agustin Museum, where the official replica of the painting was donated by Naval and his family.

The museum further notes that “it was also through this event that the natives were given a tangible representation of the Lord through the beloved image of the Sto. Niño, which, for the last 500 years, has left an indelible mark that characterizes the lives, spirituality and religiosity of Catholic Filipinos.”

“In memory of the past and in celebration of the present, we, as a Catholic nation, are indeed gifted to give,” the museum likewise noted, adding the Filipino Catholics worldwide are “now the salt that gives flavor, color and joy to the faith that was once gifted to us.”

The painting, it said is an act of thanksgiving to God and as a gift of the Filipino people.

In a post on his social media account, Carreon explained that his work “aims to give fresh/new visual representations to key events in the Philippines on 1521 using narratives and recent findings by modern scholars/historians.”

Historian Rolando Borrinaga meanwhile told Lifestyle that “the gifting of the Sto. Niño image by Magellan to the baptized Ranee Juana of Cebu, as depicted in the painting, is perhaps the most symbolic testament and evidence of the introduction and acceptance of Christianity in the Philippines 500 years ago.” —CONTRIBUTED INQ