Mobility is key for this photojournalist | Inquirer Lifestyle ❮ ❯ 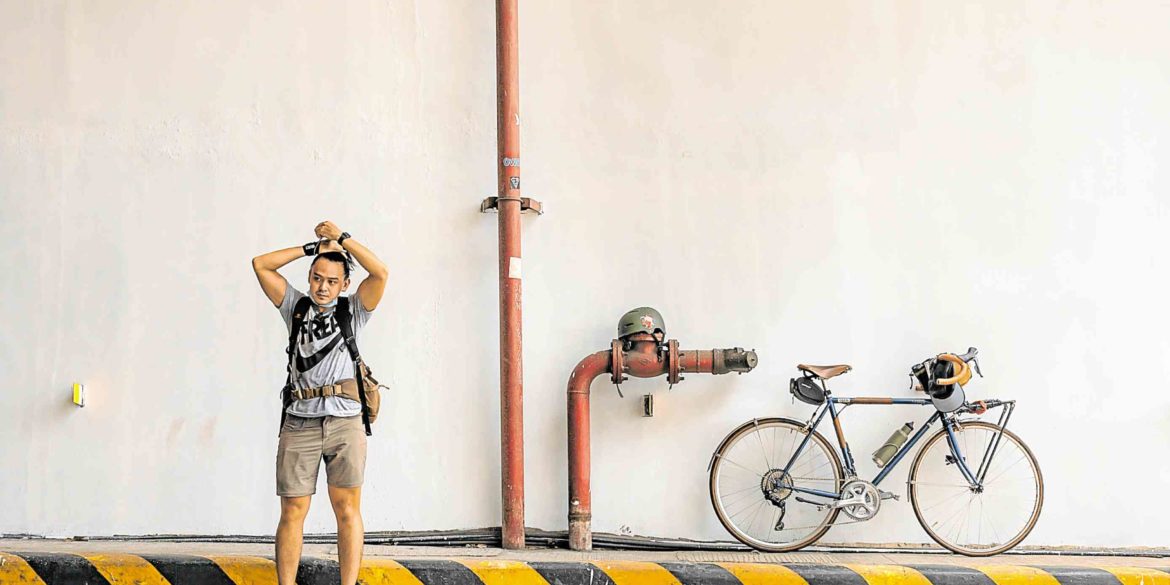 Jilson Tiu and his commuter bike

Mobility is key for this photojournalist

Jilson Tiu once had to walk from Binondo to Cubao during enhanced community quarantine; with his commuter bike, not anymore

Even before he struck out on his own, photojournalist Jilson Tiu had already honed his eye for spotting and capturing images with the slightest click of his finger. The University of Santo Tomas graduate was part of his school’s photography club and, at 19, he joined the Philippine Daily Inquirer as one of its youngest correspondents.

Always flexible, Tiu ended up covering everything from fashion events and socials to the nitty-gritty aspects of city life.

He built up a following on social media (42,600 followers on his Instagram @jilson.tiu) for his striking images that highlight regular Filipinos eking out a living.

Through his lenses, viewers see people biking in the rain, waiting for a ride or simply walking, often oblivious to the photographer who has lain in wait, determined to capture that one perfect moment.

By now, Tiu has been approached numerous times by camera brands that have asked him to take some of their new units out for a spin and share his feedback.

When we asked him what his favorite thing is, we expected him to single out a particular lens or camera, maybe some obscure brand only professional photographers like himself would recognize.

Instead, he surprised us with his pragmatism. Tiu’s favorite thing is his bike.

“It’s a commuter bike. It’s a ‘do-it-all’ bike; it’s not for mountain biking or trails but it can do almost everything else. I equipped it with a lot of better stuff, including a leather saddle and other leather accents.”

This is not his first bike, and it might not be his last.

During the initial lockdowns due to COVID-19 last year, Tiu had a hard time getting around and taking photos because few public utility vehicles continued to ply their routes. He once had to walk from Binondo in Manila to Cubao because there was no other choice.

He purchased a folding bike, followed by a “bambike” (bamboo bike). Both turned out to be too heavy and quite unwieldy. The bambike is clad in lightweight bamboo but its other component is heavy, high-tensile steel. Since Tiu was not allowed to take either bike on the elevator in his building, he had to carry them up and down the stairs to and from his sixth floor unit.

Freedom to move around

“I gave the folding bike to my girlfriend because she also likes to bike, but I traded in the bambike for the one I have now. My new bike has a chromoly frame that’s much lighter than high-tensile steel. Before the upgrades, it only weighed 10.9 kilograms versus around 18 kg for the bambike or the folding bike. With the new saddle and other features, it weighs 12.5 kg—still lighter than the first two bikes.”

Having a bike has freed Tiu from having to depend on erratic public transport and has allowed him to travel to places he would never have been able to go in the first place.

“Nowadays, cameras are very ‘disposable.’ Sometimes, the photos I take using my phone are better than ones taken with an actual camera. Of course, cameras have certain features not found in phones but you can do almost everything with your phone.”

With his eye for detail and composition, and a bike to take him around the city, there’s nothing to stop Tiu from building his already impressive portfolio.

“Now, I can bring myself to three to five different cities a day. I don’t have to worry about parking, plus biking is also a good form of exercise. It’s my cardio,” he said.