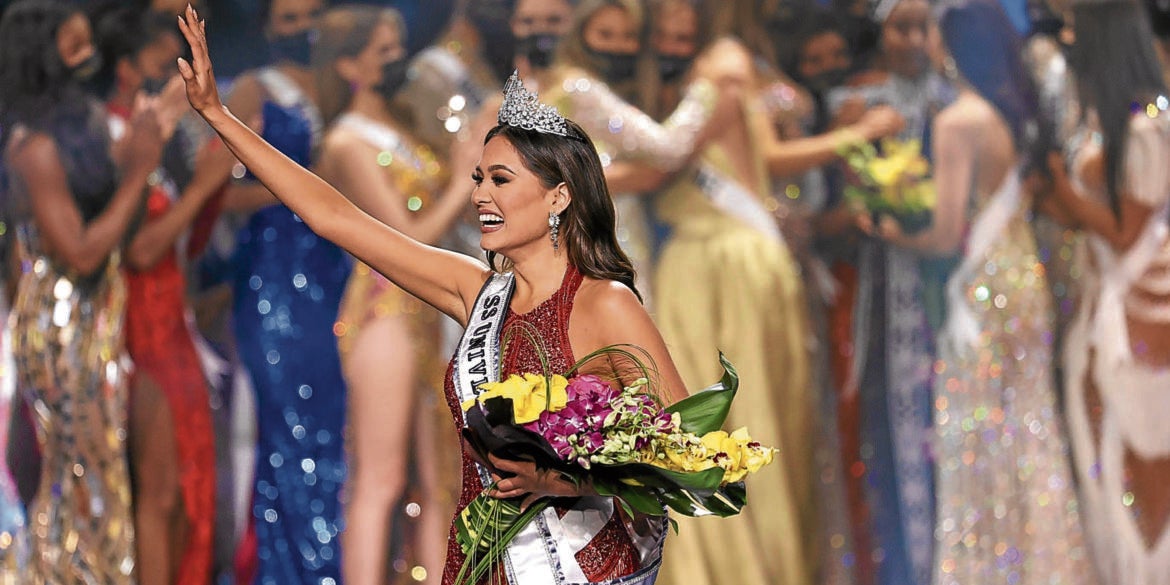 MANILA, Philippines — After being canceled last year due to the COVID-19 pandemic, the Miss Universe pageant made a comeback and crowned its third winner from Mexico, 26-year-old Andrea Meza, in a three-hour spectacle beamed around the world from Hollywood, Florida, in the United States on Sunday (Monday morning in Manila).

During the pageant’s round of questioning, Meza was asked how she would have handled the pandemic in her country.

“What I would have done is to create a lockdown even before everything was that big, because we lost so many lives and we cannot afford that. We have to take care of our people,” she said with the help of an interpreter.

For the final statement segment, Meza talked about “changing beauty standards,” emphasizing that “beauty is not only the way we look. For me, beauty radiates not only in our spirits, but in our hearts and the way we conduct ourselves. Never permit someone to tell you that you are not valuable.”

The winner from Mexico’s Chihuahua City edged out Brazil’s Julia Gama for the crown. Peru’s Janick Maceta was proclaimed second runner-up, India’s Adline Castelino placed third, while the Dominican Republic’s Kimberly Jimenez rounded out the Top 5. There were a total of 73 delegates this year.

Myanmar’s Thuzar Wint Lwin won the best in national costume award for wearing an outfit beaded with traditional Burmese patterns while holding a placard that said, “Pray for Myanmar.”

By landing in the Top 21, she was able to share with a global audience her people’s struggles in protesting against the military junta that ousted the government of Aung San Suu Kyi in February.

“Our people are dying and being shot by the military every day,” she said during her biographical video, which showed pictures of her taking part in the protests. “Therefore I would like to urge everyone to speak out about Myanmar.”

The pageant also handed out its first “Social Impact Award” which came with a $10,000 prize to Bolivia’s Lenka Nemer, “for the leadership and education you have shown to improve the lives of other people in your country.”

The Philippines, meanwhile, sustained its streak in the semifinals with Rabiya Mateo’s Top 21 finish. Since 2010, the country’s candidates have consecutively hurdled the first cut of the competition.

Despite Mateo’s early exit, top Ilonggo officials expressed their support for their “kasimanwa” or townmate on social media.

“Congratulations, Rabiya! You represented our country well and we are proud of you. You have been a symbol of hope and unity for your kasimanwas. This is the beginning of your dream in making education accessible to all. The province of Iloilo is behind you,” Iloilo Gov. Arthur Defensor Jr. said in a statement.

Balasan Mayor Manuel Ganzon said the town was “still proud of Rabiya” while Iloilo City Mayor Jerry Treñas lauded her for her advocacy on educating children.

Many Ilonggos kept tabs on the pageant in their offices or homes with radio stations reporting the event live. Employees of the provincial hall followed the pageant through a television in the lobby.

This year’s pageant was technically its 2020 edition. The last one was held in December 2019, with the crown going to South Africa’s Zozibini Tunzi, the longest-reigning Miss Universe titleholder in its 69-year history.

All delegates this year underwent COVID-19 testing before they were allowed to proceed to the competition in Florida, while a negative test result was required for those who watched the ceremonies live at the Seminole Hard Rock Hotel & Casino.

Meza earned the nod of an all-woman panel of eight jurors, including TV host Keltie Knight, and former Miss Universe titleholders Brook Lee from the United States, and Zuleyka Rivera from Puerto Rico.

But Meza is not new to global pageants, having joined the Miss World pageant in 2017 where she finished second to India’s Manushi Chhillar.

—WITH REPORTS FROM NESTOR P. BURGOS JR. AND AFP