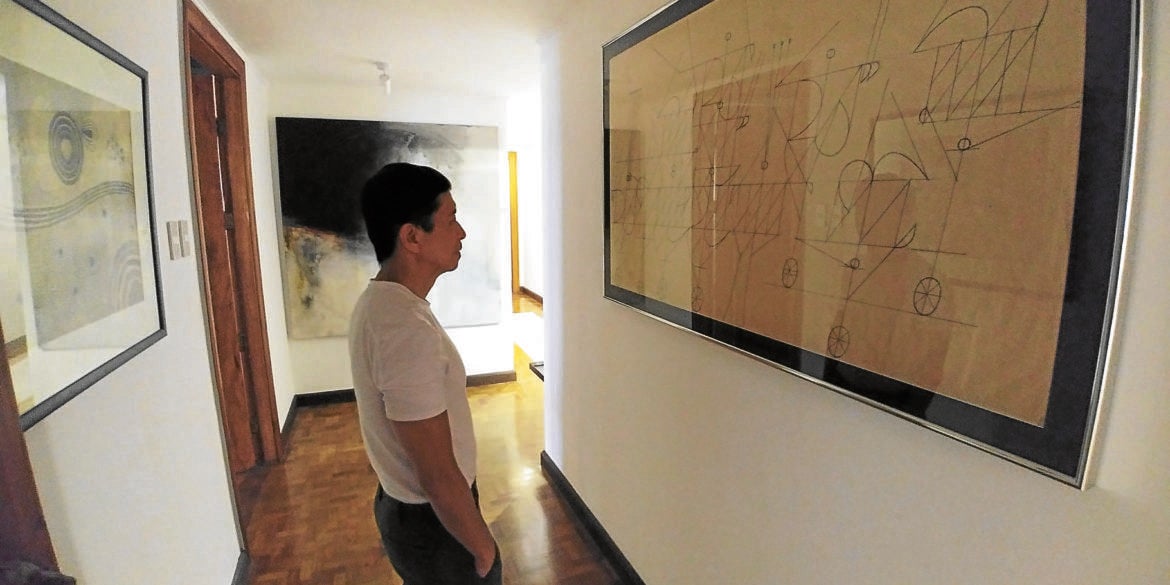 Tony Valdez surrounded by his collection

For this collector, the experience of art transcends mere appreciation

Inquirer Lifestyle is taking readers into the private collections of the country’s most accomplished art enthusiasts, beginning this week with marketing executive Tony Valdez

While preparing to come home from business meetings around Europe in 2007, marketing executive Tony Valdez called up his father, who was about to undergo cancer surgery. On the layover in Hong Kong during the trip, he received messages of condolences. His father had died.

Barely a week after his father’s demise, art cognoscenti Albert Avellana offered him a painting by Lao Lianben. At Avellana Art Gallery, Valdez was stopped in his tracks by Lao’s “Substance with Light.” At first sight, the painting showed not much more than the shadow of a man against a gray background, but the emotional connection was instantaneous.

“Abstracted human forms that allude to the transcendent make the experience of art more multidimensional than mere appreciation,” Valdez verbalizes an insight that could possibly link the two experiences. “The man [in the painting] was my father, a man of few words.”

Valdez admits to being drawn to the Filipino abstractionists. “Gus Albor, Lao Lianben, Arturo Luz, Florencio Concepcion, Romulo Olazo … and an exciting new crop led by Ronald Ventura—I’m not yet sure how to label his work.”

These favorites dominate his art collection, which is so diverse, the items are meticulously cataloged in an Excel file. The lot likewise includes a smattering of designer furniture and crystals from the owner’s numerous travels.

“I am especially attracted to paintings with religious messages, like crucifixions,” Valdez says. “I buy those that ‘speak’ to me.”

Lao is famous for the meditative quality of his works, achieved with layered textures, a restrained color palette, simple geometric forms and figures, and superimposed objects. Blacks, grays and whites, plus clean spaces around the main element, lend a soothing effect each time.

His “Substance” creates an almost palpable impact at the foyer of Valdez’s home. It is a large painting with stark elements: a golden ray given depth by a white highlight against a heavily textured black background.

“It is my favorite,” the collector admits. “I bought it when I was in a good place in every aspect of my life. The gold streak reminds me of an angel’s wing.”

“Writings on Water,” his very first Lao, is another large piece, a white canvas with drippings of black, symbolic of the subconscious.

Consistent with the monochromatic mood of his collection, Valdez just had to have Malang‘s “Crucifixion,” rendered in gouache (opaque watercolor) on paper. “Malang is known for his colors,” he says. “I picked out this [rare] one that is in black and white.”

Yet another precious find is a montage of Lao’s signature strokes. On the back of the canvas is a dedication to collector Cynthia Molino, who had earlier unloaded her artworks to an auction house.

The art collection started in 2003 with Valdez acquiring Albor’s “Continuum with a Disc,” which is displayed prominently in his hallway. Like most of the artist’s works, it is a musing on existence, expressed through spontaneous strokes and subtleties in texture and light.

Albor elevated a Betamax disc to a statement here, using it as a focal point. Valdez notes, “I like the contrast between the light and dark phases, punctuated by that disc in the middle of the canvas. It’s like [beholding] the circle of life.”

When Valdez is enamored with a piece, he goes to great lengths to acquire it.

He saw Gabby Barredo’s “Swimmer,” a floating figure made from bed springs, at Ayala Museum and then at Astra Gallery. Both times, he was told that it was not for sale.

Valdez sought out the sculptor in person and pleaded with him. One evening soon after, Barredo and a companion knocked on Valdez’s door and they prayed over the negotiation. “Swimmer” now hovers above the bar in the collector’s study.

Valdez is still intrigued by the late sculptor’s human profiles which, he feels, exemplify the psyche. For him, Barredo’s “Fetal Position,” a squatting figure made from wire mesh, alternately conveys alienation from, or reaction to, society.

He is proud to have acquired at the right time a series of five figure studies in black, white and gray on acrylic on paper by Ventura, dubbed “bad boy” of Philippine art. “I bought the series in a mall gallery,” Valdez recalls. “He was still up-and-coming, so each piece cost just P30,000.”

Ventura, currently a leading figure in Southeast Asian contemporary art, is known for melding realism with graffiti and animated characters, and for “desecrating” human figures.

“I read in the mall gallery notes that his technique is to render the human body in his own hyperrealist style while distorting it to depict angst or alienation,” Valdez says.

To achieve maximum attractiveness in displaying his collection, Valdez juxtaposes the pieces according to themes or textures.

He put together sculptor Reggie Yuson’s “Vertical Deconstruction,” a vertical steel bar with a cantilevered horizontal bar, in front of a gold-framed mirror superimposed with the word “LOVE” in reflective metal. “It looks as if the graphics (LOVE) are part of the mirror,” says Valdez.

More abstractions of faces and figures are clustered in another corner, this one featuring foreign artists.

Canadian Sylvain Tremblay’s “Regard Anonyme” is a coarsely sketched, elongated human form set in a landscape of colored planes, symbolizing the human plight in the urban setting. It is displayed with Swedish glass artist Bertil Vallien’s “Brains,” a series of colored skulls over a clear plinth and a group of figures with enlarged heads.

Antique and contemporary Greco-Roman busts that abound in flea markets in Saint-Ouen in Paris or Portobello in London share a space with home furnishing by progressive designers.

Inspired by web patterns of electricity pylons and models of bridges, a Tom Dixon “Pylon” chair is a latticework of steel rods. “Because it’s not comfortable, I had to put a cushion on the seat,” Valdez points out.

British-Iraqi architect Zaha Hadid’s “Moon System” is an angular crescent sofa made from a monobloc. Marcel Wanders’ dining table topped with marble is complemented by the same Dutch designer’s puffy “Monster” dining chairs. At the head of the table is a “Smoke Chair” by fellow Dutch Maarten Baas.

Valdez acquired quite a lot of crystals from numerous visits to France. He is fascinated by Baccarat’s modernity and geometric cuts that allow transparency, and by Lalique’s contrasts of clear and frosted glass rendered in Art Nouveau style. “I put LED candles inside the crystal vases,” he says. “They calm me at night.”

In 2018, Valdez made his latest purchase in Paris—a limited-edition, gold-painted glass vessel whose brand he refuses to divulge. It is exquisitely sculpted with dancing muses and flora.

His entire is collection is the result of a 25-year hunt. At the turn of the millennium, Valdez frequently flew to Europe for work. Across England, Italy, France and Greece, he visited museums which amply instructed him in the arts from ancient civilizations to modern times. Locally, he further cultivated his art education by attending exhibits, art fairs and auctions, and befriending gallery owners and artists.

He still attends auctions and exhibits but has not made a purchase for close to three years because, he says, art has become “ridiculously overpriced.”

Asked if he was eyeing any object at this point, just the same, Valdez replies, “None so far … but I tend to surprise myself.”