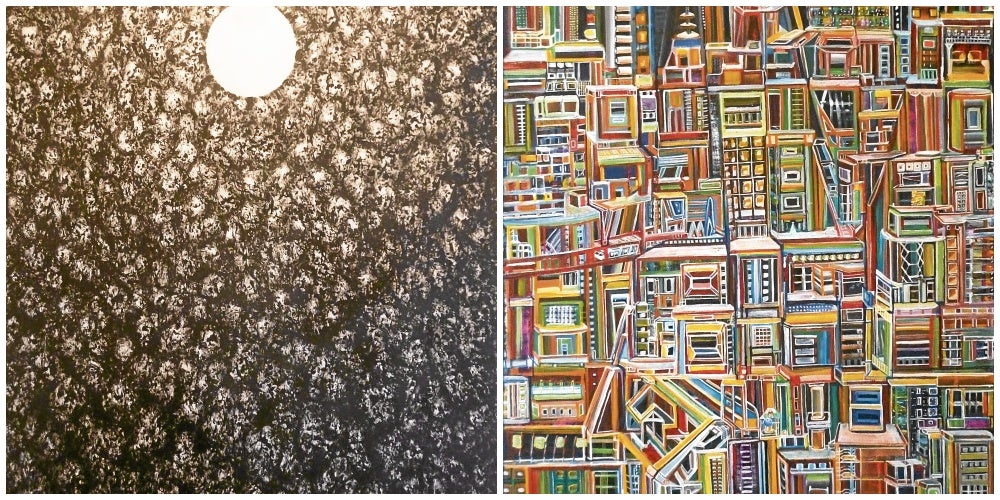 Something of a bombshell landed in the Dumaguete art scene at the tail end of April 2021: a group exhibition titled “Introspection” opened at Dakong Balay Gallery along Rizal Boulevard, and runs until May 22nd—and there is nothing else to feel about it except surprise, excitement and an unexpected stirring of affection by the scale and curatorial vision of the entire enterprise.

The exhibit is, in a word, “revolutionary”—which is a bold claim to make, but I am talking at least in the mold with which we have often entertained art exhibitions in culture-jaded Dumaguete. I did not expect to be moved.

But most of all, it feels “revolutionary” in the stylistic tightness weaving the collection, the likes of which I had not seen for quite so long, I actually have no recollection of a precursor.

“Introspection” gathers together 16 young and up-and-coming visual artists, and instead of the usual hodgepodge of works we’ve come to expect from most group exhibitions, they have come to an unexpected unity of style—abstraction—and presentation, down to the size and orientation of their canvasses—bold, big and embracing in their 5 ft by 4 ft glory.

In Sarah Jean Ruales’ “Isolation,” we feel the prolonged insulation of our quarantine in the blue blurriness of the work—for the mood and for the days melting into each other—with the one solid shape, a TV set, our constant companion in our isolated days.

In Mariana Varela’s “Nocturnal Panic,” a portrait of what feels like an insomniac woman is riddled with shards of color and shapes that induce the panic of its title. In Cil Flores’ “Emotional Transitions,” the psychological bearings we strive for are snaky and elusive. Moshi Dokyo’s “Amor Fati” encapsulates surrender—see the solid shapes in yellow and orange giving way to an explosion of devil-may-care green.

Our withering mental states are echoed in the wispiness of Gerabelle Rae’s “A Thousand Smokey Dreams,” the frailty of Rey Labarento’s exquisite “Kaleidoscope Journey” and the fragmentation of Rovan Caballes’ “Tranquil.”

I responded the most to three works of astonishing beauty. Totem Saa’s “Mental Construct” is a fauvist nightmare of a mindscape built to resemble a city—and its muscular and architectural horrors feel like a portrait of my own head. I felt seen.

Faye Mandi’s “when lines give you lemons” is a deceptively simple work composed of lines in a spectrum, its rainbow assemblage imposing a certain symmetry on the work without detracting from its basic force and vigor. It is the most optimistic of the bunch.

At the opposite end of this optimism is “LISO [The Dark Night of the Soul]” by Dyck Cediño—who exhibits under the name Deadlocks. His work is black-and-white starkness that feels like a narrative of lost souls enticed by a menacing moon of free-floating mystery, which feels like a corrective.

These paintings are maps to our psychological strivings in this long pandemic season. Mirrors such as these works help in the articulation of what we feel but cannot say. Abstraction is the perfect mirror. To quote Paul Klee: “The more horrible this world (as today, for instance), the more abstract our art, whereas a happy world brings forth an art of the here and now.”

This is not a happy world.