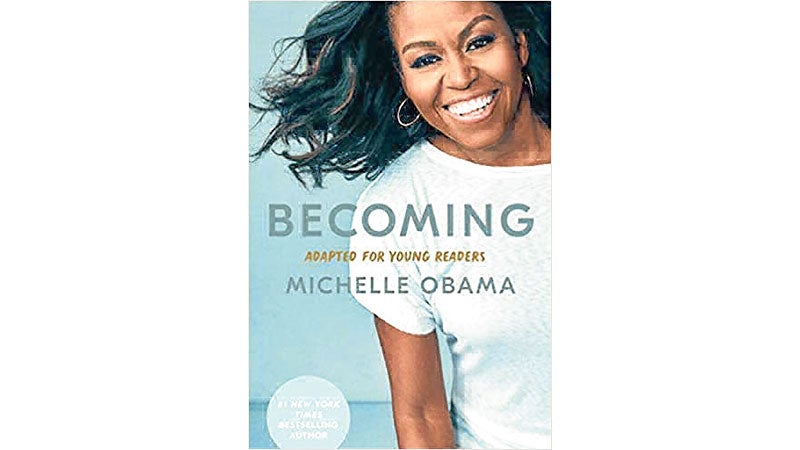 The former US first lady writes an entertaining, story-filled remembrance of her childhood and young adult years

Becoming: Adapted for Young Readers” (Delacorte Press, New York, 2021) is a new version of Michelle Obama’s bestselling memoir. Written for children age 10 to 13 (arguably the most crucial stage of “becoming”), it’s an entertaining, story-filled remembrance of life as a precocious child growing up in Chicago, all the way to being the first Black first lady of the United States.

“There is no memory too small. Every bit of our story has meaning.” With this premise, Michelle proceeds to narrate her life so far in three parts, like acts in a play. “Becoming Me” starts as an ode to her loving, self-sacrificing parents and ends with her falling in love with the thoughtful, hopeful Barack Obama. There are pictures illustrating the “white flight” from her Chicago neighborhood, and many anecdotes from her student days at “extremely white and very male” Princeton. She credits her ambition and drive to succeed to her growing up in this environment: “Am I good enough? “was a refrain that echoed throughout her life.

“Becoming Us” is both family and political drama—the best kind. Michelle spares no detail of her struggles as a young mother trying her best to continue her career. We sympathize when she surrenders ambition and privacy to to support a husband who rockets from senator of the state to the fulfilled hope of their race. We feel the rush and bustle of their presidential campaign; we share in their moment of triumph. This is as much about Barack as Michelle, and will convince young readers that there are few life choices as critical as your life partner.

“Becoming More” is a fascinating account of the White House years. This is where Michelle puts it all together. The first lady has no official job description; she took two years to thoughtfully craft hers. She decided on it the same way she and Barack decided on making a run for President. “We were continuing a conversation that we had been having for years: Who were we? What mattered to us? What could we do?” These questions, asked at different stages of becoming, are the refrain and most important takeaway from this memoir.

Even though it actually ends with Donald Trump’s ascendancy, “Becoming” is unquestionably about the triumph of hope and Barack and Michelle Obama’s embodiment of it. If the original book aimed to fan the embers of hope during Trump’s White House tenure, telling the story from Michelle’s viewpoint is a stroke of genius. It’s not just about one woman “finding her voice”—it’s a story of how a whole nation did so.

Michelle’s is a purpose-driven life, and she acknowledges many people—mostly women of color—who taught and helped her. It’s both a reminder to look out for people who help us become who we want to be, and an assurance that we will meet them when we need them. One does not become by oneself.

Black in a white person’s world

This adaptation that includes dozens of colored photos and references to Hamilton (the musical) was written to inspire middle-school children, particularly socioeconomically challenged ones. But to feel the power of Michelle’s memoir, the child must understand American culture and know what it means to be Black in a white person’s world. This woman answered the question, “Who am I?” during an important moment of American history: One needs to reflect on both to gain real insight. A typical Filipino fifth-grade student (I am mother to one) will not be able to do this just yet.

It’s readers in their late teens who would appreciate this book. Even adults can enjoy it without feeling alienated or compelled to read the original book, too. It’s a compelling story with a strong voice, which makes “Becoming” an effortless pleasure to read. That’s the real Michelle Obama you hear, telling you what she went through at your age, assuring you that struggles helped her “search more purposefully for who I wanted to be.” Ultimately, this book wants to empower the reader with a simple truth: Circumstances may shape us but not define us. Becoming is a choice we make.

Available from National Book Store, nationalbookstore.com, and on Shopee and Lazada.