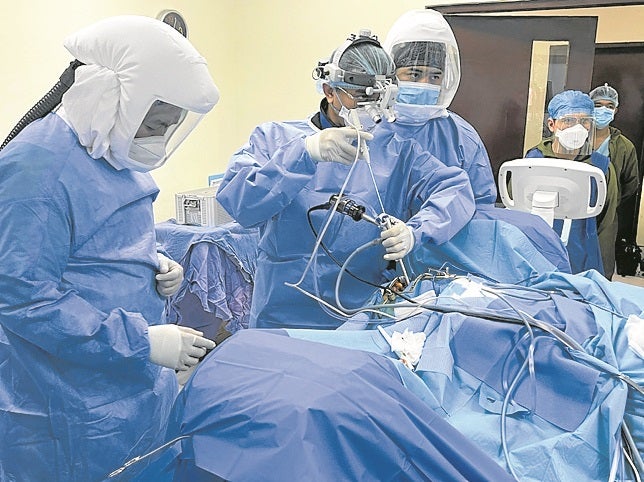 During the endoscopic spinal surgery at Bicol Medical Center

Partially paralyzed, Eden San Andres, a social worker, had been in a hospital in Naga, Camarines Sur, for more than two weeks last January. Her doctors sought help from neurosurgeon Elmer Jose Meceda, a Bicolano based in Manila.

They had never seen anything like it before. The patient’s magnetic resonance imaging (MRI) results showed a rare case of a slipped disc on the topmost part of the spine, close to the brain. Slipped discs normally occur on the middle or lower back.

A slipped disc is a painful condition that occurs when tissue between the bones in the spine pushes out and presses on nerves.

Since San Andres, 49, had been operated for thyroid cancer in 2016, Meceda could not perform open surgery on the neck. He recommended an endoscopic spine surgery (ESS), a less invasive procedure.

When the neurosurgeon visited San Andres in mid-January, she wept and asked if she was going to die. The patient had breathing difficulty every time she had to sit up in bed.

“Habang may buhay, may pag-asa (As long as there is life, there is hope),” he replied.

On Feb. 1 at the Bicol Medical Center, Meceda performed the delicate surgery. Four days later, San Andres was discharged and has since resumed her household chores and social work.

Meceda presented San Andres’ case in two conferences for neurosurgeons in Japan and Korea last March. Impressed, his colleagues declared that the Filipino doctor’s endoscopic approach through the mouth was a first in the world. The foreign doctors said it was a novel approach. If they encountered a similar case, that method would be an option.

ESS uses tiny incisions (less than a centimeter) and small tubes in tandem with an endoscope, the instrument that looks at the area where the surgery will be performed. This minimally invasive surgery greatly reduces cutting of tissues, blood loss and pain for the patient. Hence, the healing is faster.

“ESS is commonly used to decompress the spinal cord and nerve root,” says Meceda. It is likewise applied for bone spurs, back and leg pain, facet joint disease, and sciatica.

During the series of typhoons last November, San Andres was busy repacking relief goods that would be distributed to victims in evacuation centers. Every day until mid-December, the social worker carried heavy sacks despite her medical history of polio and a weak right arm.

One day, while standing up from the floor with a heavy pack, she suddenly felt a sharp pain followed by an electric shocklike effect throughout the whole body. She became numb and weak.

A few days later, she needed assistance whenever she walked. Although she continued her social work, she merely supervised the repacking of goods.By New Year, she became weaker. She needed help to get out of bed and to go to the toilet. The electric shock sensation throughout her body became more frequent and intense.

By January, she was hospitalized. The MRI results revealed she had a ruptured disc. This was borne out of a sudden movement which displaced the disc, the rubbery cushion between the vertebrae. It popped out and compressed the spinal cord, resulting in swelling, severe pain and, eventually, partial paralysis.

After his first meeting with San Andres, Meceda held a teleconference with his professors at Wooridul Spine Hospital and Good Doctor Teun Teun Hospital in Korea where he studied ESS. He told his mentors that he could not cut the skin and tissues on the neck to extract the disc. The patient’s previous thyroid cancer surgery left scar tissue. It was risky because the anatomy of the blood vessels and nerves were no longer normal.

Meceda points out that surgeries through the mouth are performed by dentists; ear, nose and throat surgeons; and neurosurgeons for skull-based procedures. “This was the first time that a spinal surgery to remove a slipped disc would be done through mouth,” he says.

During the procedure, he inserted an endoscope through the patient’s mouth, drilled a 5-millimeter hole on the topmost spinal vertebra, took out the slipped disc and freed up the spinal cord—all in a span of two hours.

After the operation, Meceda told San Andres it might take a week before she could masticate food. However, on the second day, the patient could sit up on her own, move her left arm, twitch her fingers on the right hand, chew and swallow her meals. Four days later, she stood up by herself and was discharged from the hospital.

Meceda says the advancement in medicine enables surgeons to do more complicated procedures with less muscle and tissue trauma and provide easier recovery for patients.

San Andres has been spreading the word about her surgery.

Says Meceda, “She wants to inspire people who have similar problems.” Her message: “If they are desperate, they should not lose hope. Pray and everything will fall into place.” —CONTRIBUTED INQ