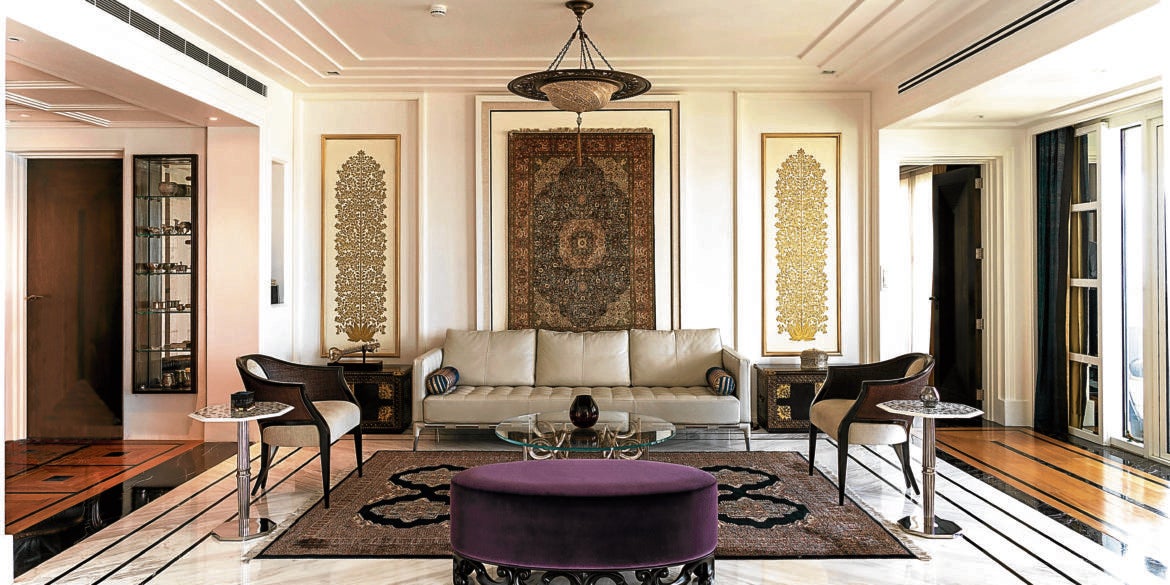 The splendor of India in contemporary design

Living in the Philippines for decades, an Indian couple had adopted the culture and place as theirs. When it came to decorating their condo in a Makati luxury development, they told interior designer Tina Periquet that they favored the Modern Asian style, just like their friends.

Periquet usually conducts a long conversation with prospective clients to understand their values, past and associations to establish a rapport. She believes that good communication is important for a successful project. The designer observed that the couple’s personalities imparted an air of formality and Old World elegance. Why not draw inspiration from the grandeur of their Indian culture?

After three years of transforming the original layout, correcting the flaws of the building, concealing aircon ducts and wiring in strategic places and working with Indian and local artisans, the final product was an up-to-date home with cultural references.

Periquet’s sophisticated blend of East and West, and attention to the minutest detail caught the attention of an international real estate awards program. The project merited the 2020-2021 Asia Pacific Property Award for Best Residential Design for Periquet and her firm Galicia-Periquet.

Completed before the pandemic, the 440-sq m condo was originally designed for entertaining. The public space comprises of a front sitting room, a formal living room and a lounge that opens to views of the city skyline. An adjacent dining room is furnished with two onyx and brass tables that glow underneath.

A wet bar graces the rotunda, the pivot point for other parts of the house. Since the clients are vegetarians, the main kitchen has separate appliances and utensils for plant-based foods. There are provisions for a non-vegetarian kitchen for guests and a service kitchen for the household staff.

The master suite has separate work spaces and wardrobe areas for the husband and the wife. Visiting relatives stay in the two guest rooms.

The design process began with her clients touring Periquet and her husband around Delhi, Agra, Gargaon and Rajasthan, where they immersed themselves in the splendor of the grand palaces and other cultural landmarks.

Periquet explains that the look of the residence adheres to the contemporary style. It emphasizes bold silhouettes and textures such as the curves of the European designer chairs and the richness of leather. Professional-grade LED lights create an unobtrusive lighting design. Indian elements are used judiciously to lend character.

“Too much ornateness (typical of traditional Indian design) is not easy to live with. The design has to fit the context of modern living,” says Periquet.

The architectural background is neutral to let the rich colors and patterns pop out. The black and white palette in the public spaces creates a bold but classic statement. Meanwhile, the family lounge is visually striking because of the contrast of polished and matte surfaces.

“The leather, steel and chrome furniture bring the look to this century. We’re not trying to recreate a maharajah’s palace,” says Periquet, adding that the mix of traditional and modern elements resulted in an eclectic look.

Book-matched marble The private elevator lobby was transformed into a formal foyer that set the tone for the resplendent design.

In Old World cultures such as India, white marble is a symbol of sophistication, purity and immortality. Thus, white Greek marble, bordered with patterns suggestive of Indian rugs, replaced the standard travertine flooring. The generic elevator portals were upgraded with black marble. The lobby wall is adorned with miniature paintings and crafts from India.

Periquet made the entrance grander by designing a pair of narra-stained doors with a serrated pattern of wood strips that produce a three-dimensional quality. Customized in India, decorative panels with hand-carved, silver-coated vine patterns and lighting sconces highlight the doorway.

She notes that one of the unique architectural features is the series of four, diverging book-matched slabs of white marble from Volakas, Greece. Each quadrant is bordered with black marble strips that hide the joints. This is rarely executed in the Philippines because of the high cost.

Book-matching is a labor-intensive technique of joining two mirror-image marble slabs, put side by side. The design dramatizes the flooring and emphasizes the formality of the public spaces, says Periquet.

The interiors masterfully weave traditional elements with the global outlook. Drapes made from Indian silk saris, a rug as artwork, a carved silver peacock feather on the sideboard, inlaid marble tables and a pair of gold dust paintings by a master artist blend with the Philippe Starck sofas and armchairs by British designer Christopher Guy, and Italian luxury brands Giorgetti and Fortuny pendant lights. A heavily-patterned Indian carpet contrasts the urbane vibe of the lounge, decked with Italian leather furniture.

The designer practiced restraint in incorporating Indian elements throughout the big spaces in keeping with the cosmopolitan style. On the other hand, the rotunda, the prayer room and powder room convey the florid Indian style.

The motifs of the rotunda, the heart of the condominium, are suggestive of majestic Indian architecture. The mandala, a sacred circular design symbolizing one’s spiritual journey, is laid out on the marble flooring and on the domed ceiling.

A dedicated prayer space with a carved dome ceiling and niches for the deities create positive energy in the home. Its marble flooring is accentuated by an agate inlay while the ceiling is embossed with mirrored patterns from India.

Jaali, the intricate stone carving from Rajasthan, dominates the powder room. Its focal point is a relief of a dancing girl whose image is doubled by mirrors.

The warm colors of India are subtly injected in the bedrooms. In the master suite, the Indian reference is a decorative latticed panel, inspired by an ancient symbol for the cycle of time.

However, the suite celebrates Filipino craftsmanship as it highlights furniture developed by Periquet with second-generation furniture maker Edwin Esguerra. Filipino workmanship is likewise prominent in another guest room where the designer worked with Designs Ligna to create a trundle bed, a vanity dresser and a table.

Asked if the condo represents Indian Modernism, Periquet explains, “We don’t label a look or intentionally follow a particular style. The aim was to evoke the atmosphere that reflected the clients’ heritage and merge it with the contemporary to arrive at something unique.”