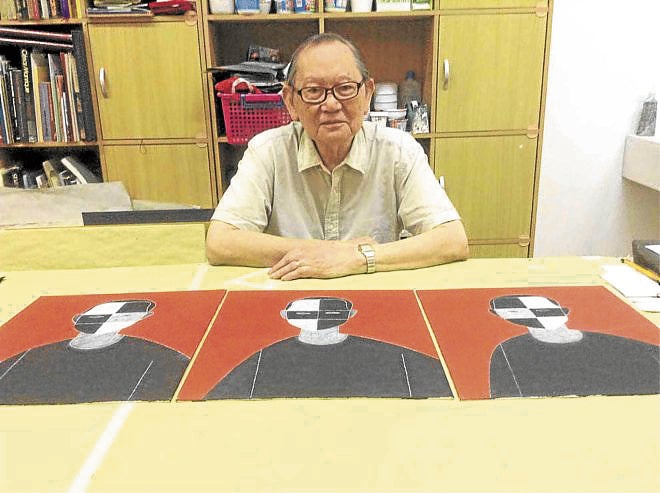 Luz with his works —INQUIRER ARCHIVE

Arturo Luz died on the night of the great lunar eclipse. I read somewhere that when the moon passes the Earth’s shadow and appears darkened, it impacts human sleep. I don’t know if this was why I didn’t fall asleep easily as I normally do, but I was awake after Impy Pilapil sent me a message that our friend, the National Artist for Visual Arts, was gone. He was 94.

I had been meaning to call on him but because of the pandemic, decided to wait till safer times. I now rued the missed opportunity and sat on my bed with recollections of a man who lived life with discipline, perception and an appreciation for substance and form.

When I first visited Arturo and Tessie Luz in their Urdaneta home decades ago, it struck me that none of his paintings were displayed on the wall. The interiors were austere. There was only a framed Fernando Zobel.

It was so much like the multiawarded man who was unencumbered by the honor and accolades reaped by his body of work. He took it in stride and kept the focus on what was consequential.

I was already an admirer of his art long before we became friends. Our relationship developed over a shared appreciation for good food. We both enjoyed fine flavors. His good friend Lor Calma called Arturo a gourmet. However, the man who would accept a spontaneous invitation to try a food find was unwilling to travel great lengths, defined as any place requiring half an hour’s distance from his residence.

Many years later, the Luz couple moved closer to my neighborhood, a few gated villages away. Pabling Calma built their house, designed by architect Ed Calma, his nephew. The exterior captured Arturo’s sensibilities. After ringing the doorbell, I had to stand back on the curbside to better appreciate the minimalist aesthetics.

Their new residence was furnished just as essentially as the previous one. Interiors were done in black and white. The only plant accents were giant ferns. Again, none of his canvases were up on the walls.

There were a few of his granddaughter Paulina Sotto Llanes’ works on the ground level. His paintings were on the second floor, leaning on the wall, one over the other. The studio where he worked, which later became his room after he became debilitated by a medical condition, was at one end.

We didn’t talk art when we were together. Ours was a food-centric friendship. However, there was this one painting he had just made which I insisted on buying. It was a linear figure of a woman with an ochre background. My emotional connection was instant.

Arturo firmly said it wasn’t for sale. He was keeping it for himself. His penchant for brevity of words left no room for discussion. Our short exchange ended with a declaration that I would tell people I was the model for that painting. I never did since there was no truth to that. I already owned a couple of his paintings in much larger scales and he had been very accommodating to let me have them on extended terms, but that woman in ochre had captured my heartbeat for life.

I never mentioned to him that I also felt a kinship because of his pencil signature. He signed his works with a pencil, my own preferred instrument of writing. It has, for me, an ethereal quality, an impermanence that does not discount the lines of meaning held.

Multiawarded architect and visual artist Carlo Calma shared with me that Arturo only signed in pencil after the work had been sold. “At the back of every painting, he had coded numbers for the price of a piece.”

Carlo recalled times when Arturo would talk about his sketches. “It was very entertaining to listen to him. He had a book where he wrote down notes so he would remember things pertinent to his sketches.”

He added, “He was so prolific and such a professional artist. He would paint from 9 a.m. to 5 p.m. like he was working in an office.”

Carlo shared a short film clip directed by Ricky Orellana that Arturo had made where he talked about his craft. His voice is heard as the camera pans around him seated on his chair, drinking from a mug, surrounded by everyday things.

He said, “You want to know how I compose my work or what principles guide me? I’ll tell you. Unity, simplicity and clarity. The work must show clarity of intention and clarity in execution. I look for relationships of space, color, line, form and tone. Of relationships between substance and form.

“When is a work complete? It is complete when I can no longer add nor remove anything, when everything has been reduced to the barest minimum and only the original impulse or idea remains.”

The night he died, I was preoccupied with trying to catch a glimpse of the lunar eclipse, but because of successive meetings in a location that wasn’t quite right, I was unable to. Was it an auguring of my unrealized intention to visit him?

Astrologers have held that such occurrences in the sky mark beginnings and, necessarily, endings of relationships and careers, routines and circumstances. There was nothing more to remove or add to his life and his works. The space he occupied had become a masterpiece. It was complete, and the supermoon was like a signature written in pencil, passing through but remaining in the universe as a bright light.

What a way to go, Arturo.