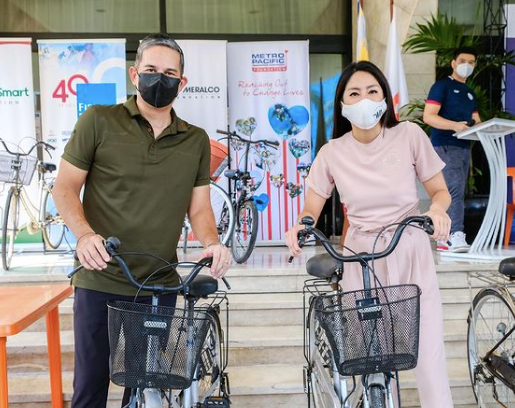 Gretchen Ho’s ‘Donate A Bike, Save A Job’ project receives 500 bikes for distribution

Just as beneficiaries thought she has already given away the last bicycle from her “Donate A Bike, Save A Job” project, TV host Gretchen Ho was pleasantly surprised to receive a generous donation from a businessman-philanthropist to replenish her bike supply for distribution.

Ho gave away some of the bikes, along with gadgets, to their first recipients, as per her Instagram post today, June 3.

“I was just finishing off donations from last year with my recent giveouts, but time and time again I am reminded never to underestimate the power of social media and telling stories,” Ho said.

“On #WorldBicycleDay, meet my newest partner for sustainable transport and my biggest donor yet — MVP,” she revealed, referring to tycoon Manny V. Pangilinan, who was also seen in her post.

Ho shared that MVP saw her rollerblade episode on “The Big Story” and messaged her on Facebook so he can donate bikes.

“He shares he never had a bicycle when he was young & even broke the training wheels of a bike when he tried. So he’s donating instead,” Ho said. “We pooled in the teams from the MVP Group — PLDT-Smart Foundation, the One Meralco Foundation, Metro Pacific Investments Foundation and First Pacific Company Limited — to officially form the #BikeForLivelihood Project.”

Beneficiaries will also have a chance to set up start-up businesses by giving them with 100 Smart phone retailer kits and 100 Smart pocket Wi-Fi.

Ho added that from her own project, she learned that there are many other areas needing development, and these do not stop in the giving away of bikes. Other issues like the creation of bike lanes and bike parking, ensuring safety for bikers on the streets, and road user education must also be addressed.